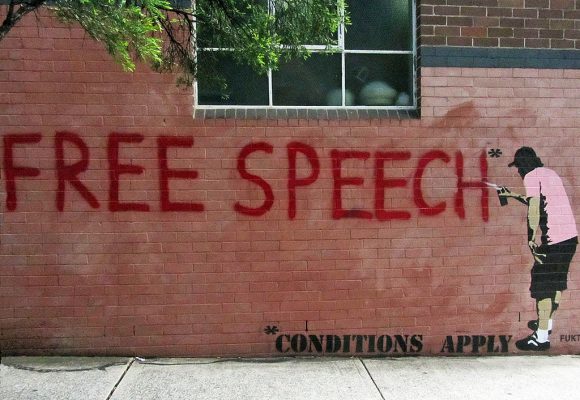 This opinion was submitted by Ariel Gold, freshman political science major at the University of Colorado, Boulder.

The First Amendment of the U.S. Constitution states the following: “Congress shall make no law respecting an establishment of religion, or prohibiting the free exercise thereof; or abridging the freedom of speech, or of the press; or the right of the people peaceably to assemble, and to petition the Government for a redress of grievances.”

In this country, unlike in many others, we are fortunate to have such liberal free speech laws. Free speech is integral to both academic and intellectual growth. Restrictions on free speech in academic settings prevent proper discourse, and in turn, discourages constructive dialogue between opposing views.

At the University of Colorado, Boulder, political correctness often takes priority over free speech. This is unacceptable.

No one’s discomfort with a certain word or phrase overrides my (or anyone’s) constitutional right to free speech. For instance, I was told that I must say “first-year” instead of “freshman,” because the word freshman is “gendered”. The person who told me this claimed that my use of the word “freshman” perpetrates an oppressive system against “first-years” and is exclusive of non-binary individuals and women for containing the word “man.”

I felt this way because, on college campuses in particular, political correctness has wrongly been equated with morality.

Those who disagree with politically correct notions are often labeled as “racist” or “sexist.” As a result, people have become wary of participating in conversations that surround “sensitive” topics such as a race, gender or politics. It is impossible to have a constructive conversation when our first priority is not to offend, rather than to engage. No one should feel worried about exercising their constitutional right to free speech, especially in an academic setting.

In the age of political correctness, those on the far-left have taken on the responsibility of writing the narrative of what is and is not socially acceptable. Under the guise of overzealous microaggressions, the far-left establishment of academia has completely transformed the concept of discourse on college campuses.

Discussion between opposing groups is no longer a common classroom practice, it is avoided. In the name of inclusion, free speech has become exclusive.

All academic forums should be environments where both students and faculty feel safe to voice their opinions, regardless of how controversial they may be.

Both inside and outside of the classroom, an important skill to hone is the ability to talk in a productive and appropriate manner with people who have different opinions. In all aspects of life — work, school and perhaps even home — we will encounter people with opposing viewpoints. It is easy to dismiss people with whom you disagree. The challenge is being able to engage with them in a constructive way. However, on many college campuses including our own, this vital life skill is being overlooked for the sake of political correctness.

While conservative-leaning opinions are not necessarily commonplace on college campuses, they are not inherently invalid. People on both ends of the political spectrum are entitled to their beliefs and, thanks to the First Amendment, are entitled to voice their beliefs as well. CU Boulder needs to acknowledge this by more widely encouraging academic discourse.

No one individual or group should be allowed to unequivocally determine what language, concepts and beliefs are and are not socially acceptable on a college campus.

As President George Washington once said, “the freedom of speech may be taken away, [then] dumb and silent we may be led, like sheep, to the slaughter.”

This was a guest opinion submitted by Ariel Gold, freshman political science major at the University of Colorado, Boulder. To submit a letter to the editor or a guest opinion, email tips@cuindependent.com. Our submission policies are here.

I am a sophomore political science major and copy editor for the CU Independent. My other extracurricular activities include Tri Delta and the Ability Alliance. In my free time, I like to read, write, and spend time with friends.