Opinion: Turning Point USA is emblematic of bigotry in the GOP 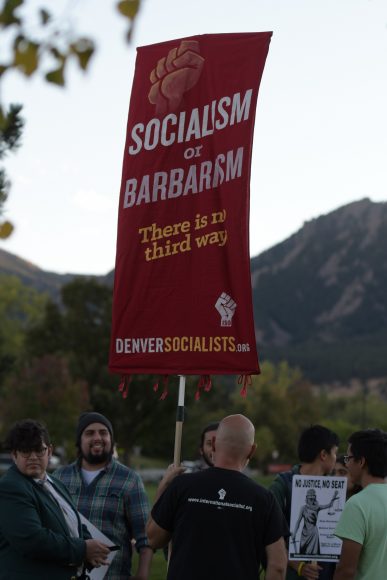 As a former Republican turned Independent, I am deeply saddened by what I’ve witnessed at the CU Boulder chapter of Turning Point USA.

Turning Point USA claims to champion individual rights and support fiscal conservatism. In reality, though, the issues they focus on are social in nature and are deeply critical of liberal culture without much academic basis. In many ways, Turning Point USA represents the Republican Party under Trump.

Both have become bigoted, anti-intellectual and nationalist, paying no heed to logical or rational debate, instead valuing pathos to influence and grow their membership. They are truly the basket of deplorables.

One of the reasons I was first attracted to the GOP was because they used to be the party of family values and morality. However, since Trump, if someone now talks to me about “family values” and the “Party of Lincoln,” I will begin to laugh. Today’s Republican party has a critically deep lack of empathy, compassion and comity.

On Oct. 3, before the Campus Clash event with Charlie Kirk, TPUSA founder, and Candace Owens, a conservative commentator, Kirk and the local TPUSA club gathered outside of the University Memorial Center. Kirk stood debating two protesters holding up cardboard signs that advocated for believing survivors of sexual assault.

The protesters, whom I was led to believe are survivors of sexual assault themselves, argued that Kavanaugh is guilty until proven innocent while Kirk defended Kavanaugh on the basis of innocent until proven guilty.

Kirk’s argument was clearly stronger, but the manner in which he went about espousing his views was in incredibly poor taste. He yelled, screamed, belittled and berated these survivors of sexual assault. At one point, he shouted in their faces, “I am sympathetic towards rape victims. Rapists should be imprisoned, castrated and executed!” Another sexual assault survivor came up and began to debate him, and Kirk’s nastiness continued. He even stooped to asking what her IQ was.

Kirk’s hyper-aggression displayed an appalling lack of sensitivity towards individuals who have endured and survived sexual assault. Yes, Kavanaugh deserved due process, but so did Christine Blasey Ford. This lack of sympathy and open-mindedness was well-displayed throughout his speech later that evening. (See the full interaction between Charlie Kirk, Candace Owens and me here.)

In the current political climate, there is no room for fiscal conservatives or civilized debate about policy. It’s a climate of trying to obtain political victories at any cost, purely for the sake of power in and of itself.

For example, wanting to approve U.S. Supreme Court justices who have similar beliefs to you is all fine and well, except for when you hope an existing one dies to ensure that. At one point, Owens suggested that it would be ironic “if Ruth Ginsberg croaked,” which felt very in line with the meetings of CU Boulder’s TPUSA chapter that I attended.

The conservative movement, exemplified perfectly in TPUSA, has become a cesspool of bigotry. Ashley Mayer, president of CU Boulder’s TPUSA chapter, did not respond to multiple requests for comment on this story.

The first TPUSA meeting I attended, on Sept. 26, began uncomfortably with one member’s “Dark Jokes of the Week.” One was about how orphans were trying to make a website but couldn’t find a homepage.

What followed was a pro-Kavanaugh discussion and U.S. history-themed Kahoot game. Some of the Kahoot names included: Michael Obama, HerEmails, Nazi_Jack, JihadMeAtHello (Ashley Mayer, the chapter president, got a very good kick out of that one), #metoo and WallBuilder69. One of the questions dealt with how Reagan was the first president ever to appoint a woman to the U.S. Supreme Court, to which someone remarked, “HA! Take that, feminists!” After some more questions, the game began to poll the opinion of the room.

A very small minority of the room, approximately five people, thought that Kavanaugh’s confirmation should be delayed. One person claimed that Kavanaugh thinks the president is immune to prosecution. Someone responded by saying, “Yep, nobody is above the law, not even Trump.” Another member started to say “Weelllll…,” as another loudly muttered about how the Clintons have killed and raped people, without any refutations.

The next meeting I attended, on Oct. 24, was indicative of the anti-intellectualism and blatant racism of the new Republican party.

We played a game where we divided into groups and were instructed to take a topic without context, nuance or specifications, just to make a more persuasive argument about it.

One of the topics was “climate change.” I was pleasantly surprised when both groups argued that climate change was real, though I was disheartened upon hearing Mayer say, “Oh you’re saying climate change is a thing, and maybe that’s why your argument sucks.”

Eventually my group got to decide the final topic. We chose the Khashoggi killing, to which Mayer responded, “I don’t know what Khashoggi is.” I was shocked that a person in charge of a political organization did not know about the top news story during that time.

When it came time to vote on who had the stronger narrative, instead of raising a blue or yellow paper as our ballots, my group elected to raise a white piece of paper instead as a protest vote.

When we raised our white papers, from the other side of the room, a man yelled, “Oh yes, I love you guys!” He began chants of “White lives matter!” saying that we had “white pride over there.”

Neither Mayer, nor anyone else, confronted this person or refuted his statement in any way.

The next Turning Point meeting, on Nov. 7, discussed the results of the midterm election. Towards the end of that meeting, the same person who made the “Dark Jokes of the Week” stated, “I’m probably going to get slammed for this, but if there was a bunch of countries all run by women and they all had a problem, they wouldn’t talk to each other.”

Turning Point USA should not be held accountable for the words of only some of its members. However, it is the responsibility of Mayer to moderate the discussion to weed out the reprehensible comments that some of the members of her organization have made.

It is incredibly important for conservatives to have groups and representation on college campuses. However, if conservatives want to avoid the stereotype of being racist, sexist, uneducated, bigoted, etc., then they need to moderate their discussions and members, as making racist and sexist remarks is not a good formula for growth. In the wise words of John McCain, these are “people who would rather find scapegoats than solve problems.”

Ultimately, if the Turning Point USA Chapter at CU Boulder wanted to avoid that caricature, they failed. It appeared to simply be an in-person meeting of the white nationalist Reddit page, r/The_Donald. TPUSA should try to have more nuance, not noise, in discussions around the issues, to avoid the sort of ideological bubble that it is.

As a former Republican who is now an Independent, it disgusts me to witness the current state of the conservative movement. People used to be able to be friends with members of the opposite party and have reasonable differences of opinion on policy, yet still respect one another. Now, the crux of the issues between Democrats and Republicans have so fundamentally, possibly irreversibly, changed. It’s no longer a question of Right or Left, it’s a question of right or wrong.