Acid spill in Cristol Chemistry sends one woman to hospital 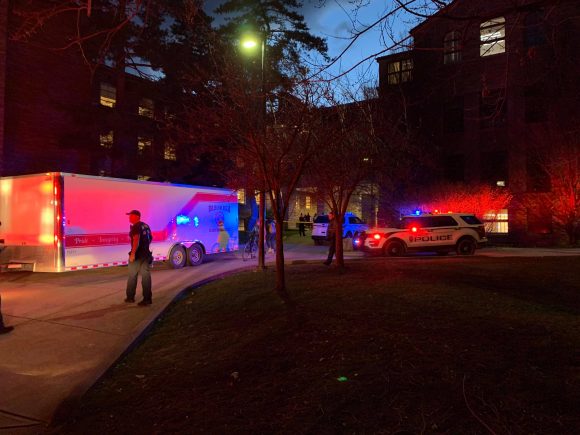 One woman is in the hospital after a chemistry accident on campus Tuesday afternoon.

A chemical spill in Room 218 of Cristol Chemistry and Biochemistry prompted students to evacuate the building at roughly 4:40 p.m. One woman was in the lab at the time of the incident and was taken to the hospital for minor injuries. It is unknown whether she is a student.

Senior Grace Bowland was in a lab on the second floor of Cristol when she heard the alarms sound. Afterwards, she heard an automated voice tell her to proceed to the nearest elevators. There were no personnel near when she exited the building, she says.

“There wasn’t [an alarm] in the lab I was in, which was a little weird to me,” said Bowland. “I’m surprised they don’t have them in the labs.”

Mitch Magrini, a CU graduate student who works in the building, said that he was told to evacuate after fire alarms sounded. Magrini was also told by a chemistry department faculty member working with the authorities that there had been an acid spill that they were working to contain.

Magrini said that those working in the lab take preventive measures when handling chemicals such as acids. Strong chemicals like acids, especially concentrated acids, he explained, are required to be stored in large metal cabinets in secondary containers.

“Pull the fire alarm, get people out of the area and try and get the situation as contained as possible with keeping exposure to actual people to a bare minimum,” Margini said.

CUPD Public Information Officer Scott Pribble is not yet aware of the nature of the chemical spill. The spill is not believed to have affected the entire building.