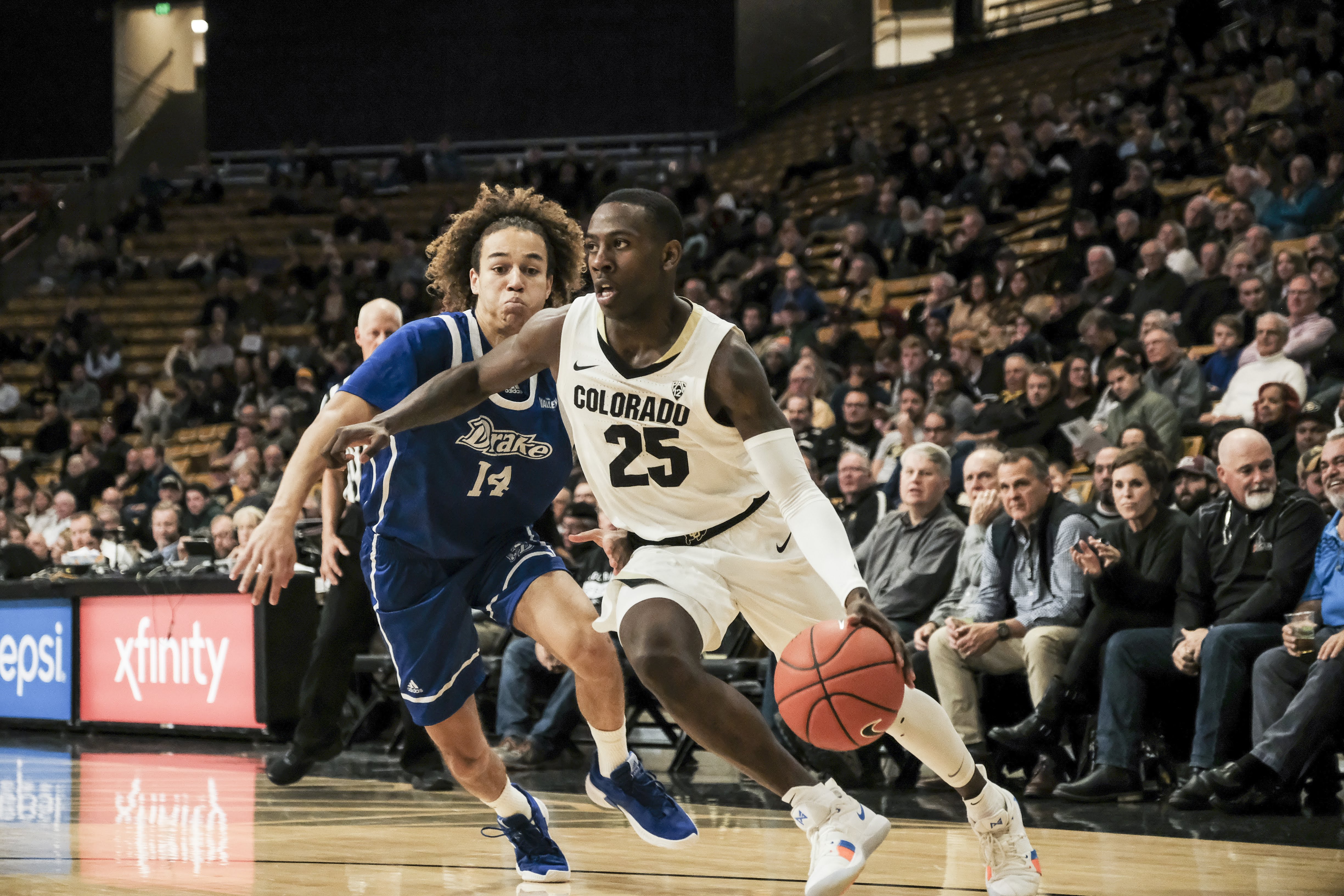 On Tuesday night, the Colorado Buffaloes men’s basketball team played host to the Drake Bulldogs at CU Events Center for the 2018-19 season opener.

The game started slow for both teams after two unsuccessful trips down the court. Finally, around two minutes in, Buffs’ sophomore guard/forward Tyler Bey scored the opening basket. Later, junior forward Lucas Siewert shot a three, and the game was 5-0. But the Bulldogs were hot on the Buffs’ heels when senior guard Nick Norton delivered a three.

Norton went on to shoot 60 percent from behind the arc by the end of the game.

Initially, much of the Buffs’ time on offense was spent finding a groove, but the Bulldogs found it faster and started challenging every shot and rebound. The Buffaloes had the lead for a while, but a shot by Norton tied the game at 9-9. The game went back and forth, but eventually the Bulldogs took control via the three ball and led the Buffs 19-15.

“Coach [Boyle] was really stressing over the last couple days [about] how good they shoot the three ball, and I think they showcased it at times tonight,” said sophomore guard McKinley Wright IV.

Wright IV was second with 17 points for Colorado.

To make up some ground, the Buffs had to push the ball and take the easy shots.

But with 10 minutes left, the Buffaloes had a surge of energy and took control of the game. A big block by junior guard Shane Gatling sent the ball into the stands. Drake took out the ball, Gatling read the pass, stole the ball and sprinted up the court for a dunk to make the game 25-19 in favor of CU.

“[Gatling] can jump out of the gyms,” said Wright IV, with a smile on his face, of his teammate.

But the Buffs were on a roll. Wright IV stole a pass across the court and made an easy layup as Drake had to call a timeout to contain the Buffs.

The Bulldogs’ defense held the Buffs at 27 as freshman guard D.J. Wilkins shot back-to-back jumpers to bring the game closer. The Buffs tried to pull away, but the Bulldogs were gaining steam as they made their free throws and made the shots that were open.

With the game in reach of the Bulldogs, Buffs head coach Tad Boyle called a timeout. To create more opportunities for the Buffs to score, Boyle had the Buffs put on a half court pressure on the Bulldogs.

Due to the pressure, steals came in, and even though some shots were missed, the Bulldogs sent the Buffs to the free throw line and took control one free shot at a time. In the final seconds of the game, Wright IV had the ball and took his time passing and dribbling it. With five seconds left, the Buffs parted the paint and Wright drove the ball down to score an easy layup in the final seconds to make the score 45-34 CU at halftime.

Upon returning to the court for the final 20 minutes, the Buffs were ready to control the game after making some defensive adjustments.

“It was just a reiteration of the game plan … we had to make sure we got them off the three-point line,” said Boyle.

After reviewing the game plan, the Buffs went on a 14-3 run early in the second half to make the game 59-37.

But Drake was not going away easily. The Buffs got a little lazy on defense and sent some Bulldogs to the charity stripe.

While the Bulldogs were crawling their way back into the game by making free throws, the Buffs were heating up from the field. Wright, Gatling, freshman guard Tyler Kountz, and Bey all started to make it rain, especially from beyond the arc, and before the Bulldogs likely even knew what was happening, the score read 74-47.

The Bulldogs made some noise every now and then with points from Norton and free throws, but nothing was good enough to combat the Buffs’ attack on the basket.

“Our focus is putting teams away when we’ve got them down, and I think we showcased that tonight,” Wright IV said.

The Bulldogs defense could not stop any Buffs shooting or second chance opportunities the Buffs would make for themselves.

After a Kountz field goal, the score was 82-59 with 7:10 to play, and the Buffs were moving closer to a 100-point night. The last time the Buffaloes did that in a home opener was against Cal Northridge in 1990.

As their lead increased, the Buffs still had to play defense on Norton — Drake’s main weapon, who finished the night with 18 points.

Besides the Wrights, two other Buffs scored in double digits: Gatling added 12, while Siewert contributed 11.

Colorado’s lone senior, guard Namon Wright, led the team and set a career-high with 25 points. He was electric from the floor, making 8-of-12 shots and 5-of-8 from long range.

In the final minutes of the game Boyle took out his starts of the evening and allowed younger players to have their chance to play. With freshman forward Evan Battey leading the charge, the Buffs were able to keep limiting Drake’s scoring.

In the final seconds, Battey got the ball down low, put up a fade and got the final of his eight points of the night, putting 100 on the board for Colorado.

“I think we’ve made significant progress since our two tests that we had in the SMU scrimmage and then the Mines game,” Boyle said.

Wright, who came off the bench, led the team with 29 minutes.

“I just want to help my team however I can and make sure the team is flowing the best way it should,” he said.

Boyle was very proud of how the team played, saying that he loved the Buffs’ effort and that the they played with confidence.

With one win under their belts, the Buffaloes get ready for their next opponent, the University of Omaha at the CU Events Center at 7 p.m on Friday, Nov. 16. 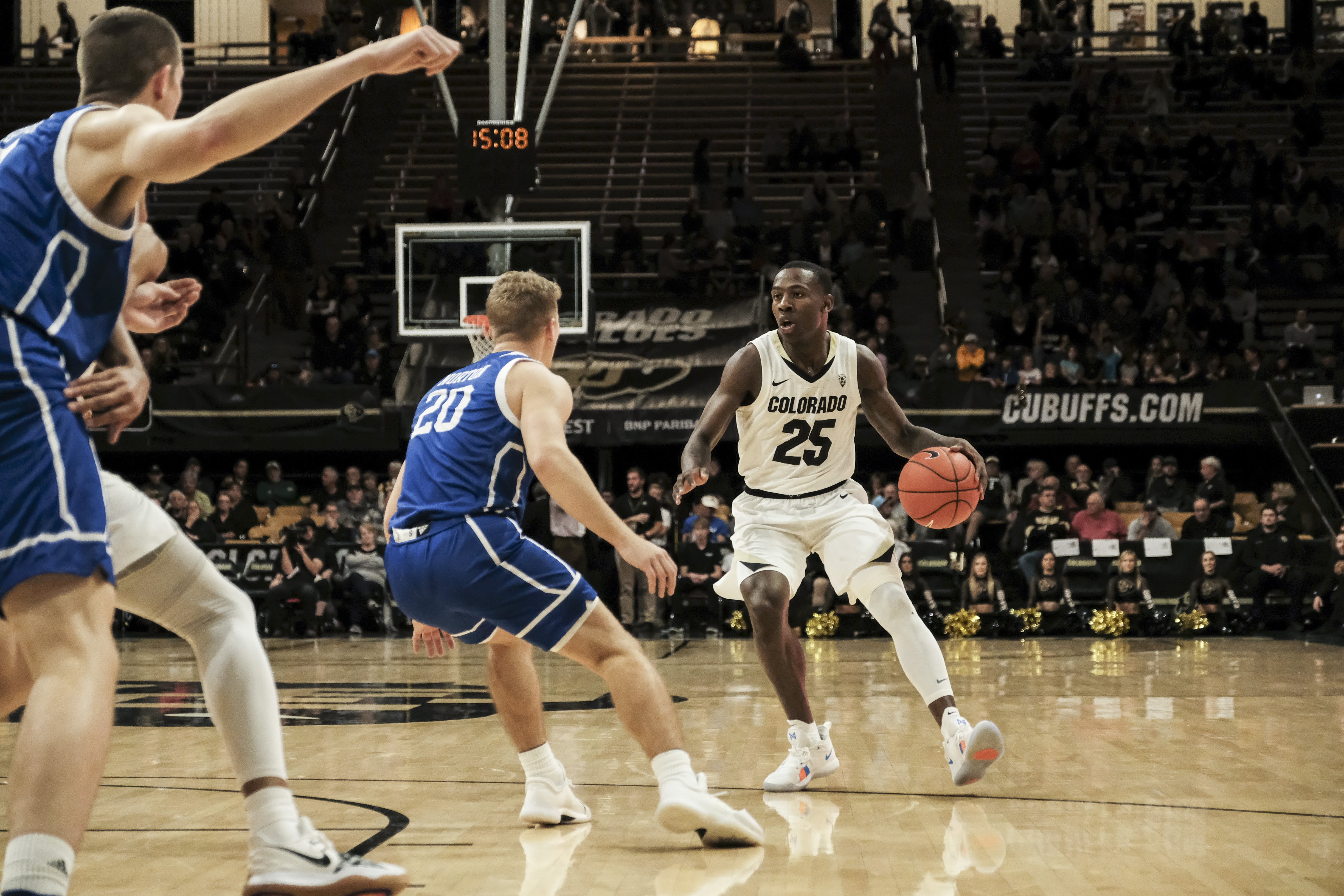 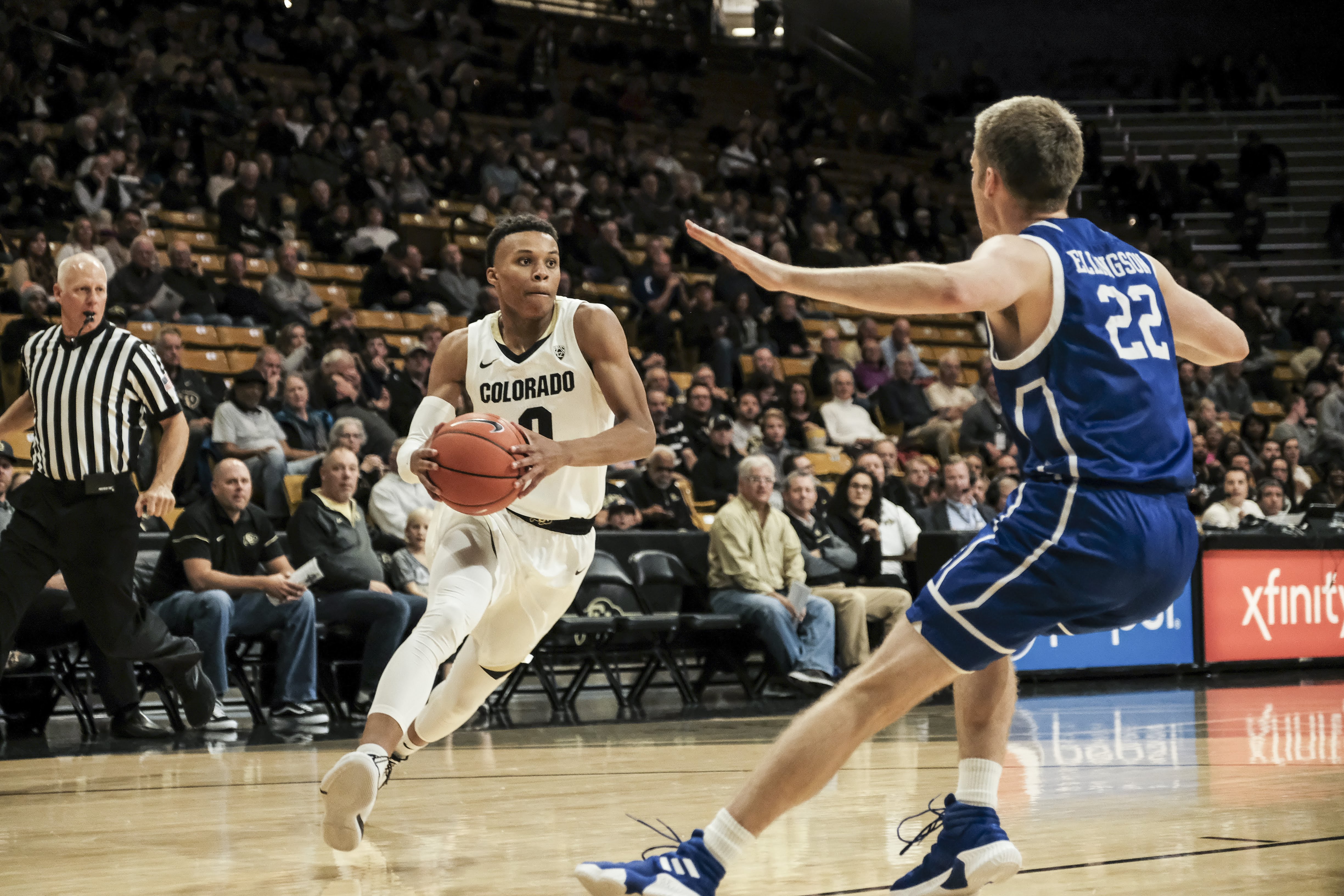 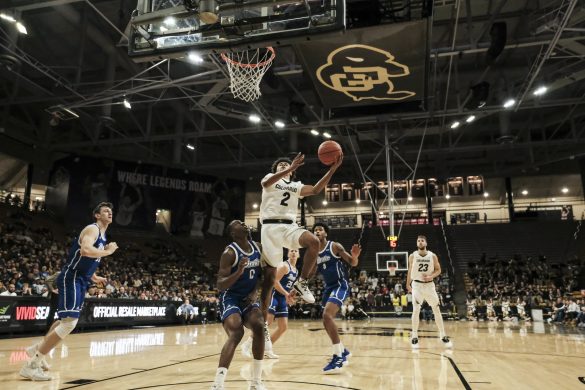