Wildcats rally, Buffs fall to No. 20 Arizona in five sets 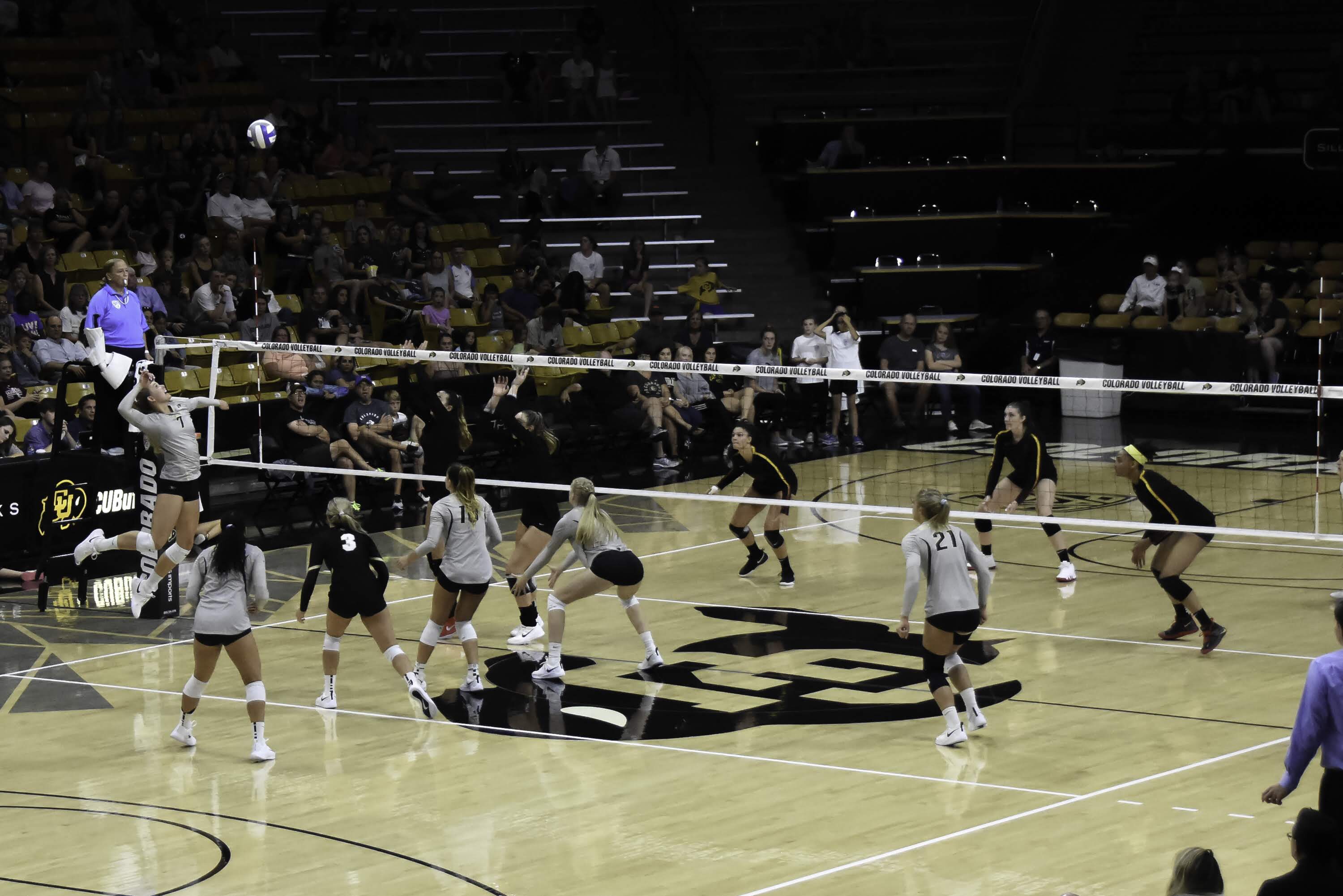 The University of Colorado women’s volleyball team celebrated Senior Day in Boulder on Sunday, and a considerably large crowd came out to show their support for seniors Alexa Smith, Naghede Abu and Gabby Carta-Samuels despite the snow storm.

The Buffaloes took on the University of Arizona, currently ranked No. 20. The Buffs looked for a big redemption win after losing their first matchup to Arizona, 3-0. Colorado took the court looking to solidify their position as the Pac-12 Tournament nears.

The energy in the building was ecstatic — whether it was the big crowd or something head coach Jesse Mahoney said before the game — as the Buffaloes started focused and hungry for points. CU lead early in the opening set and didn’t relinquish it until they finished.

The Buffaloes defense stood out in a big way, especially from junior outside hitter Justine Spann. At least three times during the first set, Spann made diving efforts that not only saved the point, but in all three instances led to a point for Colorado.

To make the score 13-6, Spann had an especially acrobatic save when she went completely horizontal and saved the ball with one hand from going out of bounds.

The Wildcats went on a small point streak of their own to make the score 16-11 in favor of the Buffs, but Spann and the Buffaloes were too much for Arizona to handle and finished off the set handily 25-20, never letting the score get too close. Alexa Smith finished with three kills, and Spann finished with four.

In the second set, Colorado picked up right where it left off, jumping out to an early 6-4 lead. It was more of the Smith and Spann show as both payers kept steadily adding to their kill totals. Along with that offense came solid team defense, not one player being selfish with the ball or trying to be a hero.

Arizona managed to fight for a few points, earning them mainly off blocks at the net. The Wildcats managed to get eight points before the Buffaloes completely shut them down for the rest of the set.

CU played out of their minds during the second set — nothing was able to get past the Buffaloes’ defense. On top of that, Arizona had at least three services errors which translated into free points for the Buffs.

The score went from 12-7 to 14-7 to 17-8 and finally to 25-8. Senior middle blocker Naghede Abu found her groove toward the end of this set, scoring three kills and a block in the final five plays.

While the Buffs were having great success, Arizona also shot themselves in the foot. The Wildcats, toward the end of the set, looked like the Bad News Bears. They made several service errors and even fought each other for the ball due to lack of communication. The Buffaloes easily rolled to a 25-8 set two win.

With possibly the final set beginning, Arizona stepped onto the court stern faced and focused, as the Wildcats looked to stifle the red hot CU offense for this first time.

Smith, Abu and Spann all recorded a total of 14 kills for Colorado.

Midway through the set, the Wildcats lead 13-11, and for the first time all day, the game felt evenly matched. Arizona’s defense finally showed up and began to generate points. CU tried to keep the score close, but Arizona was too much and pushed their advantage to 19-13. Candice Denny (nine kills and a block) and Zyonna Fellows (two kills and four blocks) led their Wildcats in scoring up to this point.

“We talked between sets 2 and 3 about not losing focus, because sometimes the worst thing to do is win big and then turn around and have to do it again,” said Buffs head coach Jesse Mahoney.

The Wildcat’s success continued in the fourth set, much to the dismay of the fans in attendance. It was all CU in the first two sets. However, after that point, Arizona and only Arizona was playing consistently good.

The ‘Cats quickly led 8-4. Paige Whipple of Arizona was a big part of this success with nine kills and a block at that point.

One player for CU, freshman setter Jenna Ewart, came alive with a nasty block. She met her opposition at the net and sent a hard attempted spike back over to Arizona’s side.

One spike that Ewart couldn’t defend came off the hands of Denny. She could probably give an MLB pitcher a run for his money with how fast she spiked the ball.

Arizona continued to be lights out with its defense, rarely letting a ball pass through to touch the floor, as the Cats’ took a 15-10 lead. After a series of service errors for CU, the Wildcats widened their lead to 22-14.

The Buffs gave the crowd a little treat when they closed the gap with a 6-2 run but it was too little, too late as the Wildcat’s finished them off, taking the fourth set 25-20.

After that, the Buffs and ‘Cats began a decisive fifth set for all the marbles in the last home game for a handful of players. Who wanted it more was the only question heading into the fifth and final set.

The last set was by far the closest — each team dominated two sets, but this last one remained up for grabs. After a controversial net touching call, Colorado led 8-7, and the hope of winning was alive.

A few points later the set was tied at 9-9, still anyone’s game.

Arizona then rattled off two quick points and got the gift of a service error from CU, which ended up being the nail in the coffin. The final set ended 15-12 in favor of Arizona.

In a game that started so well for CU, it quickly turned into disaster as the Buffs dropped three sets in a row. While the last set was close, CU let it slip away — a tough way to end the home season.

“That’s one that, you know, at the end of our season, we’re gonna want back,” Mahoney said after the game.

Arizona proved its No. 20 ranking to be true after an incredible comeback victory, and they will certainly be a force once the tournament has begun.

Before Colorado left the court, they gathered together and put their arms around each other to let the marching band serenade them one last time this season — one last time ever for the seniors.

The Buffaloes have four games left against Oregon, Oregon State, UCLA, and Utah.

“To have an opportunity to play in the postseason, we probably need to win three out of the next four, and none of those are going to be handed to us,” said Mahoney.

The rankings don’t disagree, as Oregon is ranked No. 17 and UCLA is No. 21. After giving Arizona a run for their money, it is clear that the Buffs can compete at an elite level. The only question is: will they?

Colorado and Oregon will faceoff in Eugene on Friday, Nov. 17 at 8 p.m. MST.