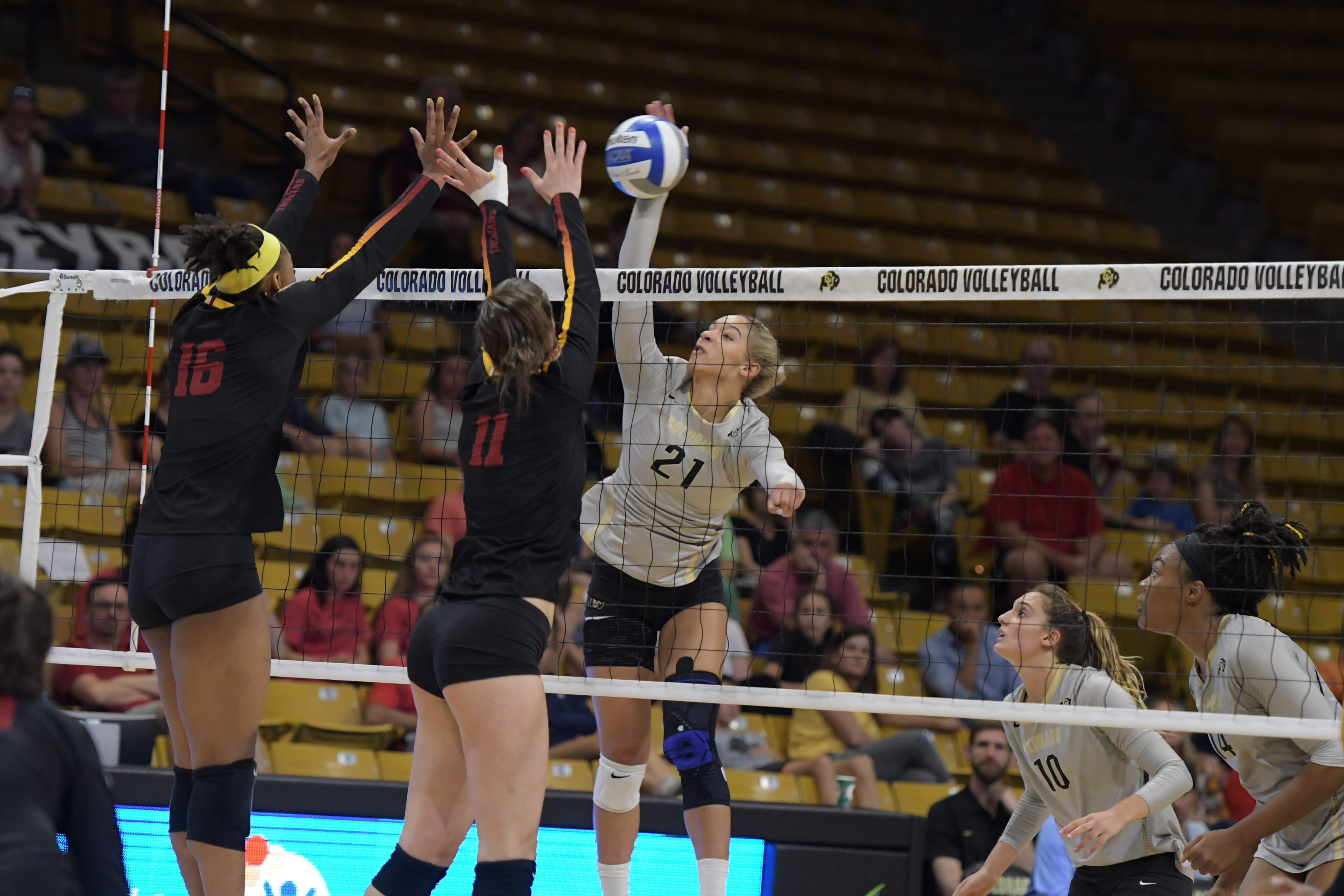 On Sunday, the Colorado Buffaloes women’s volleyball hosted the No. 21 University of Washington Huskies.

Before the game even started, there was a special energy in the air this homecoming weekend. Frankie Newhart, a developmentally challenged young man from Boulder, belted out “The Star Spangled Banner” in true Jimi Hendrix fashion with a left-handed electric guitar. Newhart performed the national anthem to open the Special Olympics World Games in Los Angeles in 2015. Finally, he got the opportunity to do it in his hometown. Soon after the Hendrix-styled anthem, the game was ready to begin, and that special energy did not disappear.

Both teams came prepared to play, and it showed — the points flew back and forth with no team able to take a commanding lead in set one. Midway through the first, the game was close at 10-8 with the Buffs on top when UW called a timeout. After the timeout, it was all Colorado.

CU came out firing and scored point after point, in part thanks to the Smiths, Alexa and Anyse. With the combined effort, the Buffs jumped out to a 19-12 lead. Colorado controlled the first set and finished the set 25-12 on an ace by Justine Span.

The second set started slightly better for the Huskies as they jumped out to a quick 8-6 lead. Washington freshman outside hitter Claire Hoffman was responsible for four kills and a block that energized UW. The Buffs countered with a rally of their own as Alexa Smith continued to have her way with the Huskies defense, with 12 kills midway though the second set. Buffs up 15-13 in the second.

A big part of Colorado’s success must be credited to their defense. The Buffs continuously sacrificed their bodies to get to the ball on time and have converted great defensive plays into points.

The Huskies took a timeout at the end of the second set with CU leading 23-20, attempting to steal a set from CU. Unfortunately for Washington, Colorado wanted it more. After a long minute-and-a-half rally, CU won to make the score 24-20. Soon after getting the point back after a service error, the Buffs finished the second set, 25-21.

For the third time in a row, the set started fairly even. Both teams traded off points with a score of 7-6, Buffs early in the third. Anyse Smith, who would tally 16 kills and seven blocks, hammered down a kill to make the score 8-6, making her total 8 kills and 5 blocks.

With a score of 13-13 midway through the third, Justine Span rose above the net and landed her sixth kill of the day. The Huskies countered and went on a small tear as they rattled off four points in a row.

With a score of 21-19 in favor of the Huskies, the third set was up for grabs. CU was looking to finish and go home, while UW want to extend the game a few more sets. UW clawed for the 25-21 win and sent the game to a fourth set.

Early in set four, the Buffs carried a narrow 6-5 lead. The usual suspects were scoring for the Buffs, including Alexa Smith, who led the team in scoring with 19 kills, and Span leading the charge. However, UW matched Colorado’s effort. Hoffman and sophomore middle blocker Lauren Sanders combined for 21 kills and 8 blocks up to this point.

Similar to the other sets, there were many lead swaps with no one team dominating. Midway through the fourth set, the Buffs had a narrow 15-14 lead, and that margin stayed narrow.

Late in the fourth, the set was tied at 18, and both teams used all their timeouts. A few moments later, there was a 22-22 tie. Then, Colorado put it away, scoring two in a row and making the score 24-22. On the game point senior middle blocker Naghede Abu sealed the game with a monstrous block. Colorado upset the No. 21 Washington Huskies three sets to one.

“I think we went out hungry today, and it showed really well on the court that we wanted to win. We all played together as a team, and I really had fun today,” Anyse Smith said.

The last time these two teams met up, Washington won, in part because of their success on the outside. This time, however, CU was prepared and shut down most outside kill attempts by UW.

“I think we did a really good job defending against their left side hitters, and that’s where we had the advantage,” Smith said.