Colorado at No. 15 Washington: Buffs gear up for their toughest test yet 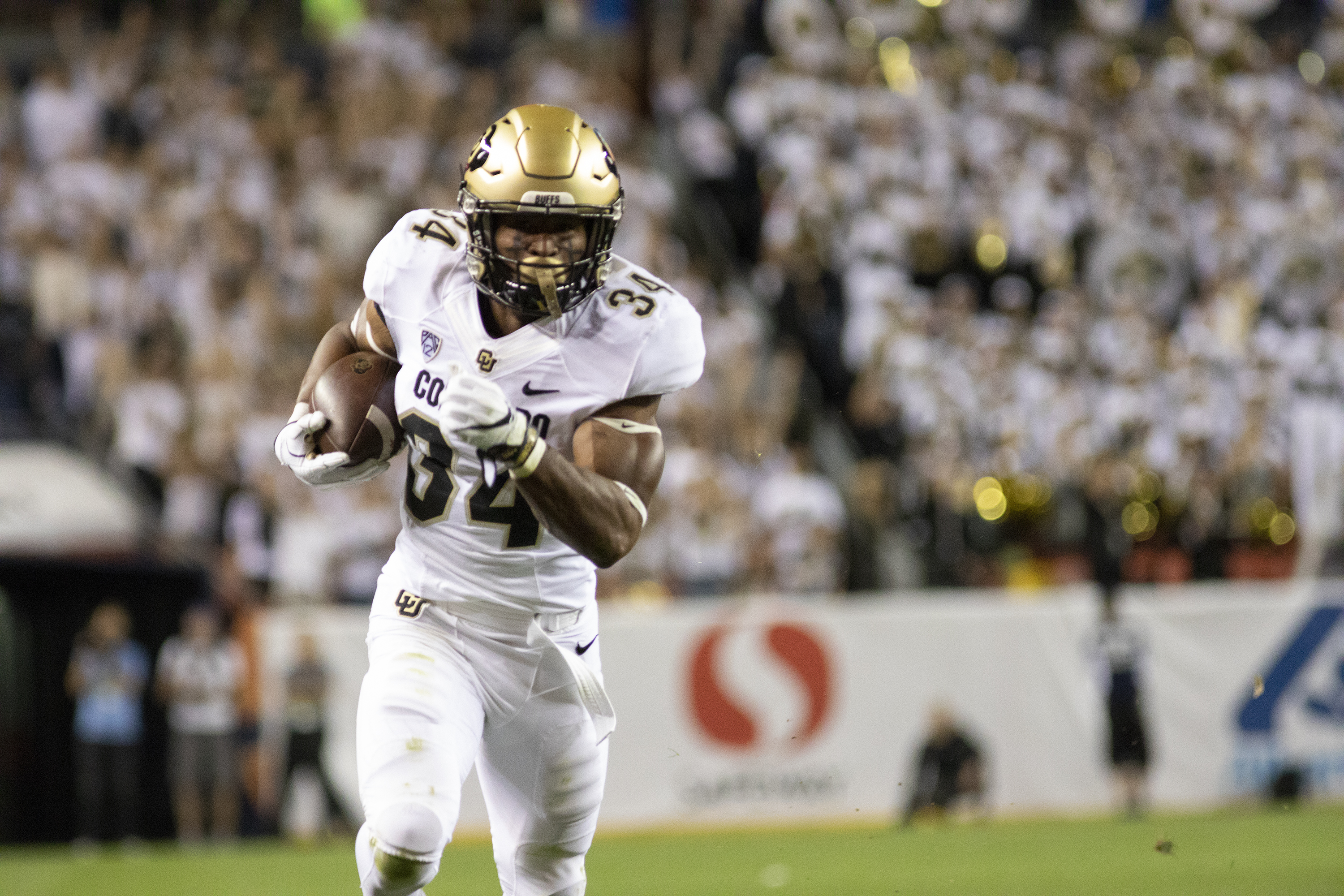 Facing arguably their best competition of the 2018 season, the Colorado Buffaloes didn’t exactly live up to the hype against the USC Trojans, a team they’ve yet to beat in their 91-year rivalry.

It sure won’t get any easier today as the Buffs travel to Seattle to take on the No. 15 Washington Huskies.

After a loss — especially a team’s first loss of the season — players and coaches tend to stew in their shortcomings or nitpick on the negatives of their play. For Colorado, however, it feels as if the opposite is true.

“I thought both the [offense and defense] practiced really hard,” continued MacIntyre. “They were physical…they spoke with their actions.”

Speaking with actions rather than talk has been the theme of the 2018 Colorado Buffaloes. In fact, it’s the team’s motto this season.

Nothing to say, a lot to prove.

“I mean, at the end of the day you’ve always got something to prove, we’re never satisfied,” said sophomore wideout K.D. Nixon. “[Last] Saturday turned out how it turned out and we’re back to work.”

You won’t hear this team wailing any “woe-is-me” or whining about the what-ifs. Rather, it’s just back to the drawing board for the Buffs. They understand there’s more work to do after a poor performance in Los Angeles.

Last Saturday, the Buffs entered the Coliseum to take on the USC Trojans in what many would call their first real, tough competition of the season. It was a game with quite a bit at stake.

It was a contest with two heated Pac-12 South teams facing off. A win for Colorado would’ve meant several things: a two-game advantage in the conference, owning the tiebreaker and an almost certainty that the Buffs clinch the South and a spot in the Pac-12 Championship. CU would have had its best start at 6-0 since 1994.

But the Buffs lost. They’re 5-1, sit behind the Trojans in the Pac-12 South, and now face the daunting task of going into their hardest competition of the season against Washington.

Loss aside, the Buffs don’t appear to be discouraged. They’re humbled.

“It brought the best out of us,” added Nixon. “[At practice] we are all ready, we’re all locked in, we’re all happy.”

For junior quarterback Steven Montez, who is college football’s most accurate passer (tied-75.2%), delivered the ball at a 55.3 percent completion rate, his lowest total of the season. The junior QB also threw for a mere 170 yards, his second-fewest in a game this season.

“I know how everybody kind of says it, but it’s kind of a reality check,” said Montez. “I think we can maybe get a little bit more work in practice, you know take those reps a little more seriously… putting us in good positions to be successful.”

Even senior tailback Travon McMillian, limited to just 32 rushing yards against SC and a 1.8 yards-per-carry average, his lowest all season, is in good spirits despite taking a beating from the Trojans’ defense.

“Travon [McMillian] had a really good practice,” said MacIntyre. “He was really upbeat, he was dancing in there when I saw him at breakfast with his headphones on. [He was] trying to get me to dance with him and show me a new dance move… he was really upbeat, ready to go.”

The point here is that some of the Buffs’ best on the team collectively had their worst performances of the 2018 season. The good news is that they all seem in good spirits and ready to move on.

For the Buffs, it’s on to the next one. Unfortunately, the road doesn’t get any easier this week as Colorado prepares for their toughest competition to date in the No. 15 Washington Huskies.

The road and ranked teams haven’t historically bode well for the Buffs, who sport a 28-game losing streak to ranked teams on the road, dating back to 2002.

Colorado owns a less-than-encouraging 5-11-1 mark all-time against the Huskies, which includes eight straight losses dating back to 1999. However, Colorado owns a pretty respectable record in Seattle, going 3-4-1 in the school’s history.

It’s been a while, though. Colorado hasn’t been able to beat Washington in Seattle since Sept. 30, 1989.

Statistics aside, the focus isn’t on the past contests against the Huskies, or what happened against USC last week, or really even looking ahead to Washington. The Buffaloes must first look inward, regroup and focus on Colorado football.

“We don’t really focus on the other team,” said Montez. “We’re just going to focus on what we do. We’re not going to worry about what they do as a team. We’re just going to prepare like we always prepare and hopefully go in and play some of our best football. That’s what we need to be focused on right now.”

They say the best athletes have short-term memory loss. That is to say, players and coaches are best suited to forget about a bad loss or poor performance and move forward quickly, sure to not overthink the what-ifs or if-only’s of their past game.

But one would be remiss to say they’ve forgotten the 41-10 wash by the Huskies in the Pac-12 Championship game in 2016. Or how about the last time CU paid Washington a visit in Seattle? The result was a 59-7 trouncing by the Huskies in 2013, coach MacIntyre’s first season with Colorado.

This game means something. It’s a chance for redemption and a chance to prove to the nation that the Colorado Buffaloes are a force to be reckoned with. It won’t be easy, especially when you’re playing one of the country’s best offensive tandems.

Huskies seniors, quarterback Jake Browning and tailback Myles Gaskin, are statistically the most prolific tandem in the nation.

Gaskin has rushed for 4,055 yards, the most in the NCAA among returning players, and his 45 career rushing touchdowns are tops in the nation among returners.

“[Myles Gaskin] is an athletic back,” said sophomore inside linebacker Nate Landman. “He’s really smart. He’s patient but he also can hit a hole downhill…he’s also a back that gets great yards after contact. He takes the first shot and he’s falling forward for an extra two, three yards. That’s definitely something we’re looking forward to stopping.”

Browning has thrown for 9,104 career passing yards, the second-most among a returning player in the FBS, and his 78 career touchdown passes are the most in the country, as well as a school record.

“There’s a bunch of things that make him good,” said MacIntyre of Washington’s quarterback. “I think a couple of the things that make him [good is that] he’s extremely accurate. He knows right where he wants to go with the football and… he’s one of those guys who’s not a scrambler, he’s able to stay alive. It’s kind of amazing how he’s able to stay alive.”

A highly-offensive and talented team like the Huskies will be tough for CU’s defense to maintain.

“[Washington’s] offense is a very physical team,” added Landman. “Their offense might have one of the biggest O-lines we’ve seen. I think they do a great job of playing well together; definitely a physical front. They got a great quarterback, great leadership [and] their receivers are also playmakers.”

Believe it or not, the Buffs’ offense actually ranks above the Huskies’ in some pretty key categories, albeit not by much.

Washington’s stout defense, however, is among the best in the country.

“They’re talented,” said Montez of the Huskies’ D. “They’re talented like they are every year. I think they have good DB’s, they’re tough up front, so we’ll have our work cut out for us.”

In particular, the defensive backs in Washington might be some the best in the country, led by junior Taylor Rapp, who torched Colorado in the Pac-12 Championship game of 2016 by picking off then-CU QB Sefo Liufau twice en route to being named the MVP of the game.

“They’ve got really good players,” added coach MacIntyre. “I’ve always been very impressed with Washington’s secondary and talent. They’re good at corner and at safety. Taylor Rapp, I think he can do a little bit of everything, he’s kind of just a playmaker. Their corners are excellent players…they’ve got a really good secondary.”

CU’s receivers will certainly have their work cut out for them against that Washington secondary, which ranks No. 15 in the nation in passing defense (178.6 yards allowed per game).

“Honestly, they’re just well coached,” added Nixon. “Going back over the film…they know what they’re doing. They have a good scheme, some good DB’s, they have the No. 1 DB in college football [in] Byron Murphy. It’s a challenge, it’s what you live for.”

It will be a challenge for Colorado, who will attempt to beat Washington for the first time in 19 years this afternoon.

Not many expect the Buffs to win in Seattle today. Perhaps the players prefer it to be that way. The Buffs will bury their heads, keep quiet and work even harder. They’ll let their play speak for itself.

Nothing to say, a lot to prove.

“I think we always have something to prove,” said Montez. “Especially because no one looks at Colorado [and says] ‘Oh yeah, they’re an elite college football team year in and year out.’ So I think we’ve had something to prove since the season started. We just have to keep moving in a positive direction and I think we’ll prove what we want to prove.”

With the game nationally televised on Fox, the Colorado Buffaloes football program has a chance to garner some attention and prove to the college football world that they mean business.