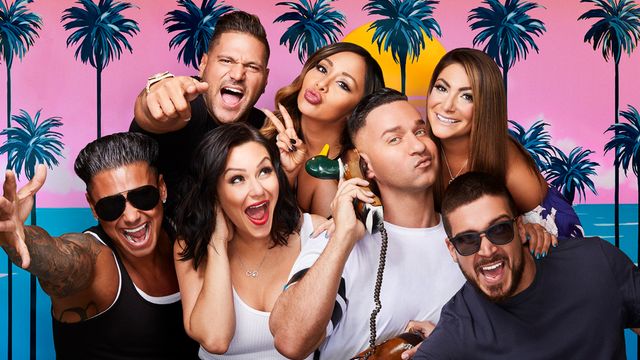 Six years older but definitely not wiser, the Jersey Shore cast proves old habits die hard in the first three episodes of “Jersey Shore Family Vacation.” With triple the cost of my tuition in plastic surgery, the roommates head to Miami to reunite for one more GTL (Gym, Tan, Laundry).

The last season of Jersey Shore aired in 2012 with a pregnant Snooki, sober Mike and a together Ronnie and Sam. In Feb., MTV announced “Jersey Shore Family Vacation” pleasing many fans who anxiously awaited closure to the captivating lives of their favorite guidos and guidettes. Now three episodes into the season, do their lives still have that spark that enchanted viewers six years ago?

Most of the roommates have settled down since 2012, but it quickly becomes apparent that not everyone has left their party days in the past. Nicole “Snooki” Polizzi and Jenni “JWoww” highlight their newly domesticated lives, each with a guido husband and two children. Their children account for most of the drama the pair face. It almost seems as if they are milking the motherhood card for every last bit of drama. Deena Cortese recently got married and is coping with the death of her father this season.

Mike “The Situation” Sorrentino is in the midst of a tax evasion lawsuit which hinders his ability to travel to Miami with the rest of the group. However, he eventually makes it to Miami to be the group’s designated driver.

DJ Pauly D is touring the world, and has since had a daughter and is the only single roommate on this vacation.

Vinny Guadagnino became a certified health god and moved out of his parent’s house although he still sees them every day.

Ronnie Ortiz-Magro is expecting a child with his girlfriend, Jen Harley.

The only one missing is Sammi “Sweetheart” Giancola, who chose not to participate in the reunion but is talked about and portrayed in creepy doll form.

The styles may have changed since the first season but the cast of Jersey Shore certainly hasn’t. While their lives may seem more put together, the roommates can still party like it’s the early 2000s.

The premiere episode showed all the glitz and glamour of a former guido turned reality show celebrity. The episode had a familiar taste of drama and fake tanner which showed promise for the rest of the season. However, the second episode didn’t evoke an urge to fist pump along at home. The drama was superficial and seemed like the exact same thing viewers experienced in the previous seasons, which could be perceived as a positive or negative addition to the reunion.

The second episode did bring some excitement to the show. Between the horrible pop 100 songs that MTV feels the need to include in every single scene transition, the episode revealed that Jenni had a miscarriage in 2011 and then became addicted drugs known as “downers” and “uppers.” A revelation that was never again addressed after the news broke, it seemed as if the producers were reaching for some drama and grabbed ahold of the first thing they could find. It is certain to come up again as the show loses momentum.

Episode three was filled with short bursts of drama while the rest of the episode felt exhausted. The roommates go to a club and naturally, drama ensues — a habit that seems a bit childish for a group of people in their 30s. However, this frivolous behavior is what made the show so popular in the first place. Ron complains about Sam and then invites a group of girls back to the house. The episode concludes with the producers hinting that Ron might’ve cheated on his baby momma with one of the girls from the club. This scandal is sure to keep fans watching until at least next week.

While some scenes seemed rehearsed, the roommates prove that their personalities, friendships and love of fake tanner can still captivate an audience eight years later. With foreshadowing of cheating, tears, drama and maybe jail time the rest of “Jersey Shore Family Vacation” seems promising — if you can overlook the reality TV show effect.

Season 5 review: ‘BoJack Horseman’ is back to haunt...