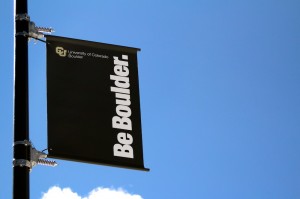 A “Be Boulder” sign hangs on a pole near the Center for Community building on campus/ Mar. 5, 2014. (Calyx Ward/CU Independent)

In the face of public condemnation, the University of Colorado Boulder confirmed its real meaning of diversity: wealthy white students with diverse skills.

A New York Times analysis published last week found that universities across the U.S. recruit disproportionately at affluent high schools. This analysis covered roughly 31 universities, including our very own CU Boulder, which, according to the data, primarily visits out-of-state schools that reside in neighborhoods with a medium income of $105,600. The data included in the study also shed light on the university’s intentional disregard of out-of-state high schools that have a median income of $62,700 or lower.

The university responded with little to no remorse to its appearance in the study, stating that it has no intention of changing its recruitment practices at “random” schools in light of the New York Times’ data.

According to a Daily Camera interview with Ozan Jaquette, the study’s co-principal investigator, universities like CU Boulder have been pushed toward this recruiting method due to low state funding. Since 1980, the university has experienced a near 70 percent decrease in state funding. Thus, they must use the “limited resources” they have to advertise at schools that are known for funneling students into the university.

First and foremost, while the university may have lost state funding, it’s not in dire straits.

Rather than putting the school’s “limited resources” toward more open and inclusive recruiting practices, CU has taken on extracurricular projects, like a $1.2 million pedestrian bridge that will “improve campus connectivity.” Additionally, the university intends to use its “limited resources” on a $22 million expansion of the Leeds Business School Koelbel building, which will essentially be a building physically connecting the business school to the engineering school.

CU officials also claim that the state funding has caused tuition to peak, thus providing more reason to only recruit from out-of-state communities that can afford it. However, while state funding decreases, endowments meant to contribute to the university’s operating budget have increased

As endowments have increased, though, so has tuition — by about five percent, annually.

The 2016-2017 university budget required a $7.1 million increase that would contribute to “enrollment growth in the colleges and schools,” among other things. The 2017-2018 tuition increase shows similar increases, which suggests the school is raking in another $7 million-plus in addition to endowments to be used on aesthetically pleasing facilities instead of inclusive recruitment practices.

Secondly, while the university argues it needs to use its “limited resources” strategically, an out-of-state school that is already heavily familiar with and annually funnels students into CU shouldn’t require an expense of greater efforts to recruit. The most strategic and inclusive method of recruiting and improving diversity, as well as overall academics, would be to use those resources on recruitment of poorer, talented students and students of color.

Currently, the university’s white population makes up over 71 percent of the student body. The second largest ethnic group is the Hispanic population on campus, at 11 percent. While the university touts its commitment to improving diversity, the demographics and recruitment practices prove different.

With numerous diversity summits to appease the critics, the university still does not sufficiently value diversity. As CU exists today, the highest ranks of the decision-making process continue to increase an already steep tuition and low government funding to excuse itself from recruiting lower-income students who have the potential to improve the school holistically. Instead, the university uses its funding to keep its social status and lavish facilities.