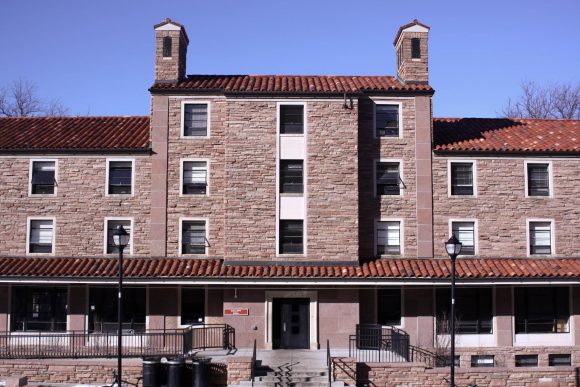 Hallett Hall residents have described a lack of knowledge surrounding their student rights during interactions with the Community Safety Operations Program (CSO) officers since the start of the spring semester. Students described confusing, tense or unprofessional interactions following receiving write-ups or, in some cases, a false accusation.

Among the Hallett residents who were surveyed, the most commonly cited reasons for negative CSO interactions — excluding the simple fact that students were written up for a misdemeanor — are that the officer made unprofessional commentary during the interaction, the student was falsely accused or that the student was not aware of how the procedure would unfold. In rare cases, students have filed official complaints regarding the interactions, often with the support of hall directors or resident advisors (RAs). 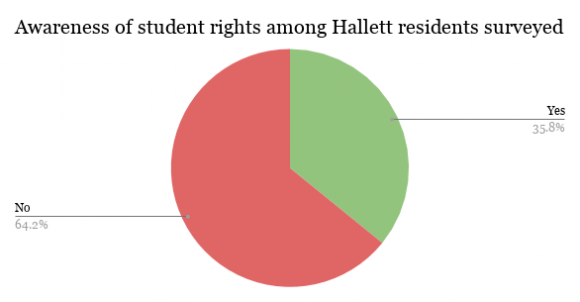 Of 53 Hallett residents surveyed, only 19 students — 35.8 percent — stated that they were aware of their student rights as they pertain to CSO interactions.

If a CSO officer smells marijuana or is suspicious of alcohol, they have the right to knock, but can only step in the room if the student grants consent, according to Hallett RA Nabil Ettachfini. From there, he said, they are able to confiscate any alcohol or marijuana. They are also allowed to record the Buff OneCard numbers of students involved.

Ettachfini was made aware of his rights through RA training. Dorm residents, he said, are told their student rights during the first floor meeting of the fall semester. Student rights are also outlined in the online housing contract signed at the start of the year.

The on-campus resident contract includes a paragraph each on the school’s no smoking or marijuana policies, with a link to the student conduct handbook on the following page. The document lists alcohol and marijuana as prohibited and offers suggestions on what consequences a student may face for possessing them, but not what the procedure of a CSO confrontation would look like.

“Personally, I think [student’s rights] should be more apparent […] I do think residents should be more responsible for knowing their rights themselves,” Ettachfini said. The job of knowing one’s rights, he said, should not be placed entirely on advertisements, RAs and CSOs.

This lapse in communication between campus security and students living in dorms has contributed to what some view as an antagonistic relationship between law enforcement and on-campus residents.

Among the students who had negative CSO interactions, several said that having known their rights beforehand would have made the interaction more pleasant and less confusing. This includes Nina Ryan, a Hallett resident who described her write-up experience as “lengthy and confusing.”

The muddy relationship between students and CSOs is often described as more than just a misunderstanding. Several students cited a lack of professionalism in their CSO interactions, adding that unnecessary comments made by CSOs made the experience more drawn-out and confusing.

“I wish they would keep it to a strict procedure,” Ryan said. “A script to follow would be better.”

Similar sentiments were shared by students who were falsely accused of having drug paraphernalia in their possession.

On Jan. 21, Hallett resident Charlotte Mitchell was told by two officers that her room smelled of marijuana. Mitchell was asked questions regarding her height and had her eyes and tongue checked for signs of use. According to CUPD Sergeant Mark Heyart, CSO officers don’t carry the equipment to perform mouth swabs.

“At one point, the [CSO] said that she would be willing to bet her partner’s salary that there was marijuana in the room,” said Mitchell. “That comment in particular I thought was very inappropriate.”

Mitchell brought the complaint to her hall director as well as filing her own report through the CUPD Citizen Communication Form. This led to an in-person meeting between her and Vekasy in which they discussed Mitchell’s complaints.

In response to the comment made by the CSO officer, Heyart said he would not want to “comment on something I don’t know the facts on.”

“We do take these seriously and want to make sure that things are being done well, I don’t want to interfere with that,” Heyart said.

On Jan. 25, another Hallett resident, Lauren Nelsen, was accused by two CSO officers 0f having drug paraphernalia. The officers allegedly mistook Nelsen’s flower vase on her windowsill for a bong. Nelsen complained too about a lack of professionalism during the interaction.

In an email to Hallett Hall Director Nicki Hutchinson after the incident, Nelsen wrote that this was her third negative experience with CSOs. Previously, Nelsen recalled being told that her room “reeked of marijuana” despite the fact that she didn’t smoke, and prior to this was accused of smoking cigarettes in her dorm when she was burning incense.

“I hate feeling like I have to walk on eggshells in my own home, especially since I follow all of the rules in Hallett,” Nelson wrote in the email.

Nelsen reported that although she had told the officers that she had no paraphernalia, she was unsure if she was going to be written up for the incident. She struggled while looking up her rights on a policy website, saying they were “very ambiguous.” She also filed a report through the CUPD Citizen Communication Form and has yet to receive a response.

Claudia Costello, a witness to Nelson’s interaction, said that officers should be more open to hearing an explanation from students.

“They could be less accusing and more understanding,” said Costello.

The CU Independent has not received a response to multiple requests for comment from Pribble.

As of the publication of this article, neither Mitchell or Nelsen have had developments with their cases. Nelsen’s filed report on the CUPD Citizen Communication Form has yet to be responded to.