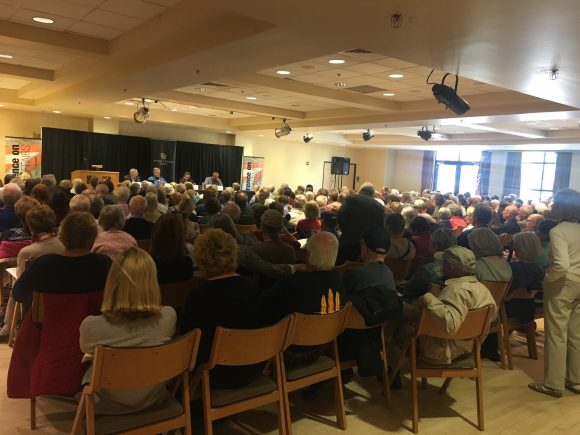 Republicans: A House Divided overflowed, those who did not arrive early were forced to watch from a live stream in another room, April 10, 2018. (Hunter Allen/CU Independent)

Correction: an earlier version of this article misidentified Lisa Grave’s title, she is the co-director of Documented, a watchdog group that investigates corporate influence on democracy.

With cheers, boos and gasps, the Conference on World Affairs dove deep into politics this year, exploring and debating the realities of the Trump-era U.S.

The Conference on World Affairs, or CWA, is a weeklong conference held at CU Boulder each spring. The conference brings 100 speakers to campus from across the U.S. and the world to speak on a range of panels about everything from food to foreign policy. All events (except this year’s Aly Raisman keynote talk) are free to students and the public. Past highlights have included Roger Ebert, Ralph Nader, Arianna Huffington and Henry Kissinger.

Launched 70 years ago in 1948, the CWA was a pre-internet way to bring knowledge to CU, but has adapted with the times and now makes use of technology including livestreams and an app to promote the conference.

Political discussions during the CWA included both political left and right panels. Featured on the panel for “Republicans: A House Divided” was the conservative thinker Robert G. Kaufman, the 2017-18 visiting scholar for the Center for Western Civilization, Thought and Policy (CWCTP).

Both talks discussed the factionalism in their respective parties. Kaufman even discussed his respect for the nationalist sects of the Republican Party.

Lisa Graves, a panelist at “Democrats: A House Divided,” commented on the Koch brothers, two influential donors for the Republican Party. Graves emphasized their influence on party dynamics. Graves is the co-director of Documented, a watchdog group that investigates corporate influence on democracy.

“What the Koch brothers are doing is utterly corrupting and destroying our system,” Graves said.

The talk “Devolution or Revolution: Separatist Movements” discussed the international climate of new independence and civil unrest. The independence movements in Scotland and Catalonia were brought up in relation to their effect on the EU and Europe, with mention of racial and ethnic divisions in history, specifically in the post-soviet era.

The most outspoken member on the panel was Ross Wilson, a retired ambassador to Turkey and Azerbaijan. Wilson discussed the Kurds, a complex and widespread group across western Asia.

Some community members in attendance sought to learn new perspectives by attending the conference. Clay White, a middle school teacher, hopes to bring different perspectives to his classroom by attending the CWA talks. White added that he has many students disheartened by the last election.

“I try and gather as much information as possible so they have enough information for them to develop their own ideas about politics,” White said.

“I’m sort of tired of everything being referred to social media when at the same time the primary social media platform [Facebook] is coming under enormous question,” Bender said.

The energy of the audience was palpable at the political talks. One elderly female audience member shouted “vote for Ralph Nader,” a third-party presidential candidate of past elections, during a burst of applause at the “Democrats: A House Divided” session.

CWA attendees also had the option of choosing from a host of foreign affairs related political talks this year, ranging from the peace in the Arab world to the geopolitics of nuclear disarmament.

CWA panel on “Leadership and Ethics” discusses values and...

Conference on World Affairs will move online, focus on...