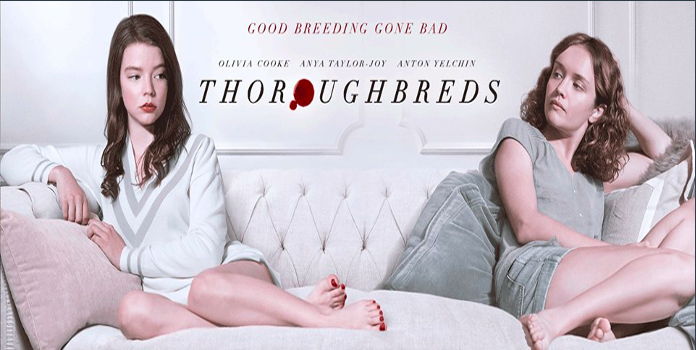 Cory Finley’s debut film Thoroughbreds is a collage of great movies. It has tracking shots through hallways reminiscent of Stanley Kubrick’s The Shining. The film’s tonal register rarely rises beyond the apathetic tenor used in Yorgos Lanthimos’s The Lobster and The Killing of a Sacred Deer, and the plot is evocative of a Sofia Coppola movie.

Thoroughbreds follows two wealthy suburban teenage girls, Lily (Anya Taylor-Joy) and Amanda (Olivia Cooke), who were once childhood friends and are now reunited for some SAT tutoring. Lily is an overachiever who completed boarding school early, while Amanda is an alleged horse murderer and possible psychopath. The two of them eventually rekindle their friendship, bonding over their lack of emotions. This bond manifests itself in their plot to kill Lily’s step-dad Mark (Paul Sparks).

Finley is a longtime playwright and it shows. Thoroughbreds is like a play, revolving around long conversations that slowly unveil the characters. It is also black box-esque, as the film rarely leaves the setting of Lily’s house.

This mansion seems to represent a sublime world only for it to be infected with toxic inhabitants — a metaphor for the characters’ lives. The imagery on display is captivating, but the characters inhabiting it aren’t as much.

Thoroughbreds issues come from 90 minutes of two sociopaths who talk with zero emotion in their voice. It doesn’t make for a captivating film. It’s possible that this is intentional, and Finley is leaving audience’s feeling nothing, like Amanda.

Finley has confidence as a director. He displays his vision in a crisp, stylish film with great overhead shots, sensible tracking shots and consistent symmetrical framing. These tricks do a satisfactory job of translating the stage feel of the script into an effective screen experience.

The performances were also serviceable. Taylor-Joy was brilliant in how she slowly convinced herself that killing her step-dad was a good idea. Her pair of giant saucer eyes add another level of emotion to her past characters in films, like the puritan horror film The Witch, and last year’s hit Split. Here they create a terrific sense of stagnant apathy. Taylor-Joy is quickly becoming the Jamie Lee Curtis of psychological thrillers — becoming an avatar for tension-filled movies.

The scene with most tension involves Anton Yelchin in his final performance, before his unexpected death in June of 2016. Here he plays Tim, a drug dealer who sells exclusively to high school kids. He shines in this role as the one sloppy character in a film occupied by rigid and pristine performances. Tim gets mixed up in Amanda and Lily’s murderous plot and the three of them deliver a lively, harmonious back-and-forth that is exciting and engaging.

But Yelchin’s character quickly becomes an afterthought and is sidelined for half-an-hour, only to show up in the film’s superfluous final scene.

Thoroughbreds is a good idea for a movie. It’s The Virgin Suicides meets Heathers. But that also means it is derivative and relying too much on other filmmakers’ past work. Luckily, Finley is only a first-time director, which means he will have a long time to work on his craft. Thoroughbreds is good enough. For a first step, it has its moments and is well-made. But for Finley to really make a splash in the film industry, he needs to stop copying other directors and start having his own individual style.