Red, Right and Blue: Our assault on truth 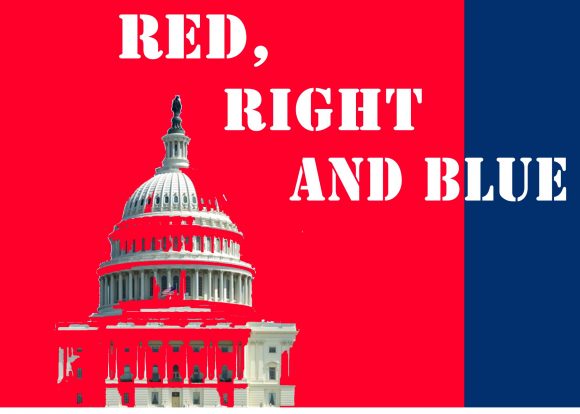 Of all the ideas that built America, there is one that is at the heart of all the rest: Speak truth to power. In our founding document, Thomas Jefferson wrote, “when a long train of abuses and usurpations, pursuing invariably the same Object, evinces a design to reduce them under absolute Despotism, it is their right, it is their duty, to throw off such government.”

Speaking truth to power is our birthright and our gravest responsibility, without which we are no “city upon a hill.”

Today, we have a President who speaks untruth to the powerless. A President who came to power peddling repugnant conspiracy theories about Barack Obama, the Clintons, immigrants and Muslims. A President whose savage presidency preaches “alternative facts,” condemns liberal democracy, enshrines division and rebukes in every way all those timeless values that make America great.

Though for all the criticism President Trump has earned, he did not invent the assault on truth nor the rejection of our common values. The American people accepted the death of nuance, comity, truth and shared values long before Mr. Trump’s infamous escalator ride announcing his candidacy and we may very well continue this trend long after President Trump takes his last ride on Air Force One.

Whether you are liberal or conservative, the future of our country hinges not on whether your party holds Congress or occupies the White House but on whether Americans of all stripes choose to reward noise or nuance at the ballot box.

Noise or nuance: That is the fundamental question.

Donald Trump secured the presidency through an uncommon alacrity for noisy and meaningless soundbites at the expense of any nuanced or thoughtful policy proposals. Build the wall. Mexicans are rapists. Lock her up. Trump read the political map for what it was: A deliberately ignorant environment saturated with self-destructive narcissism.

But the assault on nuance is bigger than Trump. Senator Sanders didn’t pull the idea for a $15 minimum wage from an economics textbook. There is zero evidence suggesting that $15 is objectively better than a $14 or $16 minimum wage. But $15 is a nice soundbite with massive potential for voter mobilization. It doesn’t matter that a $15 minimum wage would ruin the rural and small business economies. What matters is that Senator Sanders proposed a solution, albeit an absurd one, and didn’t lecture voters on how complicated economic policy-making can get.

More importantly, Senator Sanders took an economic issue, the minimum wage, and provided it with a moral dimension through the label “living wage.” His position became uncompromising, because nobody compromises on their morality, and his opponents were branded as inhuman for even suggesting alternative policies.

The moralization of political issues isn’t something in which either the Left or the Right is innocent. Anyone who criticizes affirmative action is a racist. Anyone who has an abortion is a murderer. Whether it’s “Build the Wall” or “Living Wage”,  we accept restrictive labels absent any real policy proposals, diminishing our sense of commonality and squandering the possibility of compromise.

And why should America care about nuance? It’s easy to say that our problems are solvable with a border wall, Muslim ban, $15 minimum wage or tuition-free higher education. But it isn’t true. America’s greatest accomplishments weren’t achieved with any measure of ease or simplicity. The problems we face today won’t be resolved without compromise, comity and compassion.

This column is an opportunity to speak truth to power. In George Orwell’s words, the “further a society drifts from the truth, the more it will hate those who speak it.”

Mainstream liberalism and conservatism each have compelling virtues — this column is not a categorical condemnation of either — but it is an appreciation for the powerful vices inherent in both. Whichever side you’re on, we all have our merits and we all have our flaws; recognizing those flaws is what will make America great again.

Most importantly, our prevailing ideologies don’t have to be mutually exclusive, because the world rarely is as black-and-white as we might like it to be. Liberalism doesn’t have to fail for conservatism to flourish. Our ideologies can succeed, and often do, in equal measure, symbiotically challenging each other for the better. Politics has never been and should never become a winner-take-all system of interactions.

After all, America is a big country. If it takes a village to raise a child, it takes a much bigger village to raise a country. We need solutions that are bigger than one idea, one voice or one ideology. We may have 300 million people, 535 members of Congress, fifty governors and new president every four or eight years, but this is the only America we’ll ever have.