Opinion: ‘Get Out’ should win every Oscars’ nomination 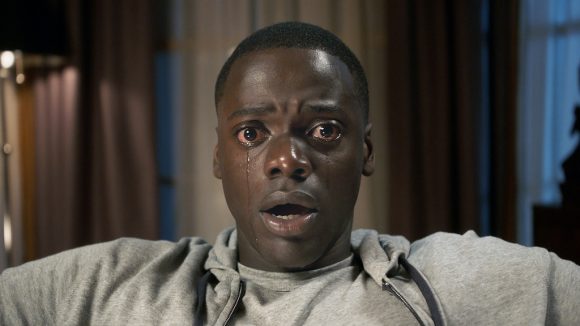 A shot from a scene in Get Out, one of the most popular films from the past year. (BagoGames/Flickr)

Since the #MeToo movement started a social revolution last year and continued into 2018, awards shows are feeling the pressure. Golden Globes attendees were urged to wear black in support of the #TimesUp movement. The Grammys were heavily criticized for giving Ed Sheeran the win in a category dominated by women and for giving Bruno Mars the most wins over more meaningful music (such as Logic’s “1-800-273-8255”) and female nominees.

The Oscars, next up in this year’s awards season, are feeling the heat as nominees were announced a few weeks ago. Last year, the Oscars shocked the nation after receiving criticism about their white-washed nominees by naming Moonlight Best Picture. This year, movies that have already won Golden Globes such as The Shape of Water, Three Billboards Outside Ebbing, Missouri, Call Me By Your Name and Get Out are also nominated for an outstanding amount of Oscars.

And while the Academy doesn’t necessarily take stories of social justice into account while nominating movies, it should.

All of the movies nominated were beautifully done, with compelling stories that needed to reach the world. However, Get Out addressed one of the most important social issues that is not garnering nearly enough media attention. The movie explores police brutality, racism, racial fetishization and issues of white supremacy that still exist today.

Get Out begins with subtle jabs at racial injustice through the interaction between the main character, Chris, and a police officer. The jabs continue as his girlfriend Rose’s family tries a little too hard to relate to Chris’s background. Then, if the viewer hadn’t already picked up on the racial undertones of the entire film, a white family is shown kidnapping, hypnotizing and mutilating multiple black men in order to implant white brains into their bodies.

Seldom in the past has a movie so harshly depicted racial fetishization towards black people. This is why Get Out should win every category it’s nominated for, including Best Picture.

This movie not only has an incredibly talented, young and diverse crew but it also creatively and eerily depicts the white fascination with people of color — fascination to a point that it becomes scary, incredibly racist and almost animalistic. The way Rose’s family and the guests study Chris is comparable to someone looking at a museum display or a zoo exhibit. They objectify him — reducing him to his physique — and view his photography talent as a removable attribute that they can use for themselves.

The fascination is completely based on external attributes. They don’t care about who he is as a person — they only care about his talents and his body.

Get Out tackled white people’s obsession with people of color, along with other forms of racism in a shocking plot full of twists and turns.

It’s a modern, medically twisted form of slavery. Unlike films such as Django Unchained and 12 Years A Slave, this movie is set in present-day America, which is part of what makes the story so gruesome.

In addition to the theme of this film, it deserves to win several Oscars because of how well it fits traditional Academy criteria. Dramatic camera angles, suspenseful music and vivid maniacal facial expressions make this movie complete.

Daniel Kaluuya’s acting is phenomenal. In Get Out, he fully displays his character’s utter fear, desperation, anxiety and adrenaline. His acting made my heart race throughout every moment that his character’s own heart was racing.

The Academy nominates movies based on production quality, acting, directing and other elements that relate to the overall quality of the film. None of the categories — barring Best Screenplay, which is still judged based on film quality — relate to the story or relevancy of the movie. In addition to how well the movie is done, the story — especially stories of social justice and social relevance — should be a category in and of itself.

Movies that tackle tough issues of race deserve to win over movies that only have good production quality. It’s more important now than ever to reward pieces of art that serve social justice.