Staff Picks: Is it fair to be disappointed in CU men’s basketball this year? 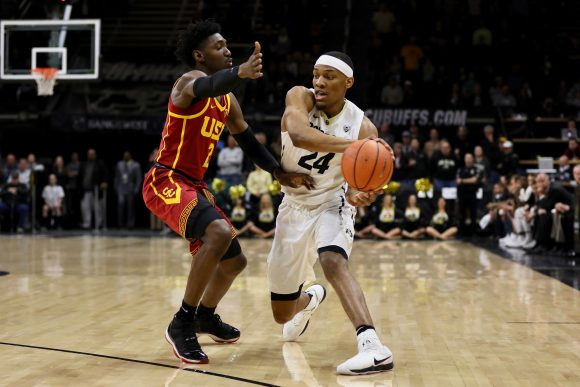 Senior guard George King looks to pass the ball around a Trojan defender during the first half of play at the Coors Event Center. Feb. 21, 2018 (Nigel Amstock/CU Independent)

Alex Pepper, Sports Staff Writer: It’s hard to call this season a disappointment when you consider the fact that the Buffs have been starting three, sometimes four freshman a game.

This team’s inexperience showed at times — CU is ranked last within the Pac-12 Conference with a turnover margin at –3.30 — but the Buffs were still able to come up with some huge wins, specifically, the back-to-back upsets against the Arizona schools and both UCLA wins.

The Buffaloes’ 16-13 record is admirable considering the competitiveness of the Pac-12 this year, and the team’s 8-9 Pac-12 record could even get to the .500 mark in conference play with a win at Utah this Saturday.

If the big wins aren’t enough to prove that this season wasn’t a failure, the players sure are. Freshman guard McKinley Wright IV burst onto the scene and assumed the starting role, and set the record for most assists in a freshman season, passing Colorado great Chauncey Billups.

Senior guard George King crept into the top 20 on the all-time scoring list in his fifth and final year at CU, and many of the other underclassmen have already improved significantly, namely Tyler Bey, Lucas Siewert and Dallas Walton.

While this season may not result in an NCAA tournament berth or even an NIT berth, it shouldn’t go down as a failure as it’s about what we should have expected from a team of mostly freshman trying to compete in one of the NCAA’s toughest basketball conferences.

Not everything was a success, and there are things to be disappointed in, like the loss at Colorado State, the inability to capitalize on a strong start in conference play, or the high amount of sloppy play the team showed, as their 14.34 turnovers a game ranked 295th out of all Division 1 schools.

There are things to work on, and not much was pretty, but this team showed signs of promise through this season, and it’s hard to be disappointed at the moment. Now, if the team doesn’t grow and improve next year, this end-of-season review may have a very different tone next March.

Kyle Rini, Assistant Sports Editor: It still doesn’t quite make sense to me how this team — even if they win at Utah — will finish with less regular season wins than last year’s team that started off conference play with seven straight losses.

How is this team, that pulled off consecutive upsets and swept UCLA, not better record-wise than the squad that relied solely on the effort of Derrick White?

I think the answer is that this team seems better because it represents a bright future for CU instead of a bleak ending. The 2016-17 team was a season-long disappointment for a group of seniors that were supposed to put in their best performances in their final year.

In contrast, the 2017-18 team was a flawed, but surprisingly impressive display of what head coach Tad Boyle can do with players that fit his system from the get-go. It felt like these freshmen already skipped a year of Tad-ball education and are poised to do even greater things in their future seasons in Boulder.

Despite the final tally, this season was, to me, a surprise not a disappointment. It was a new beginning for CU and though it faltered towards the end it still gave us some great moments as well as some reasons to be optimistic. Did it feel good to beat Arizona too? In Boyle’s words, “Hell, yeah.”

Dylan Rutigliano, Sports Staff Writer: It was a season to forget for CU’s men’s basketball team as they stand towards the bottom of the Pac-12 with a record of 16-13.

The 2017-2018 season for the Buffs wasn’t the best, but the team did show flashes that could be built upon heading into next season, such as the wins against Arizona and Arizona State as well as sweeping UCLA for the second consecutive year.

However, it is hard to win the majority of your games, especially in a tough conference like the Pac-12, if you don’t take care of the basketball. CU averaged 14.34 turnovers a game which ranks 295th out of all the Division I schools. This was the weakness of the team all year long, they really just couldn’t get into sync.

This could be due to it being Colorado’s first year without new San Antonio Spur, Derrick White leading the charge. They had to rely on freshmen ball players such as McKinley Wright IV, Tyler Bey and Dallas Walton.

For how inexperienced this team was this season, they did fight hard and continued to get better throughout the season in many aspects. But next year these young players will have a year under their belt, so this won’t be an excuse for next year.

They have a lot to work on this offseason, but one positive thing that can be taken away from this season is that the future is very bright for Colorado’s men’s basketball squad. Be prepared for a turnaround in Buffs basketball. The talent and potential are all there. As always, Sko’ Buffs!

Justin Guerriero, Head Sports Editor: I think this season was disappointing simply due to the flashes of brilliance that Boyle’s young team showed over the course of the year. There seemed to be much potential for the freshman-heavy Buffs to do something special, yet, road woes, sloppy basketball overall and inconsistent play sank the team to its current mark of 16-13.

If one was to ask Boyle and for that matter, any player or coach on CU’s men’s basketball team what their opinion on the season result was, I highly doubt anyone would be found marching to the beat of the lame excuse that sounds something like this: “We have a young team and although we didn’t reach the level of success we wanted, there’s always next year and the immediate future!”

The Buffaloes should have confidence in themselves and that they have potential to really rock the Pac-12 Conference in the years to come. However, to be satisfied with this season based on excuses of youth is nothing more than chalking up a moral victory.

Steven Lawler, Sports Staff Writer: It’s been an up and down season for the Buffs. With that said, I am a little disappointed with the outcome of this season.  Fortunately, there were some bright spots such as Wright IV. He led the team with 14.1 points per game and 5.11 assists per game, while playing in all 29 games this season.  King had a solid Senior season nearly averaging a double-double with 13.1 points per game and a team leading eight rebounds per game, which was 4th in the conference.

As a team, the Buffs finished with an outstanding home record (12-3) at Coors Event Center including back to back wins over AP Top 25 opponents where they dismantled the No. 4 ASU Sun Devils and No. 14 Arizona Wildcats, respectively.

The Buffaloes additionally came out victorious with quality wins over Utah and UCLA.  However, the Buffs struggled mightily on the road this season finishing with an abysmal (1-9) record including a loss to in-state rival CSU, and later suffered a 30 point beatdown at No. 13 Xavier.

The Buffs’ defensive woes deserve plenty of blame as they finished 9th in the Pac-12 in points per game allowed which in my opinion, was from a lack of physical and mental toughness required to win on the road in a hostile environment.

Team offense didn’t fare much better.  They only managed to score 72 points per game, ranking 11th in the conference and no CU player averaged over one assist per contest other than Wright IV.

This shows a real lack of team basketball in regards to sharing the rock.  Last year, the Buffaloes finished at a pedestrian (19-15) record and rarely has a team coached by Tad Boyle finished with two mediocre seasons in a row. Ultimately this season has left fans scratching their heads. Nonetheless, the Buffs have a young team so expect to see a much-improved squad next season.