A conversation with the cast of CU’s Vagina Monologues 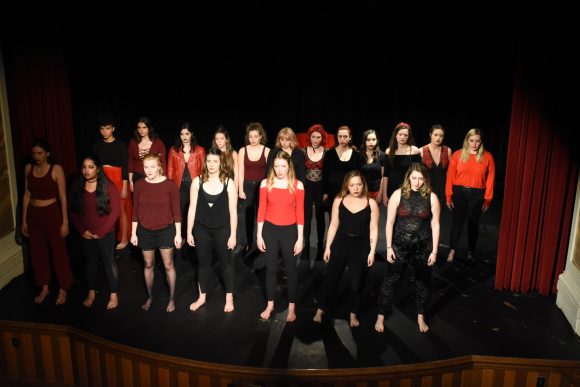 The cast of The Vagina Monologues performs the moving finale entitled “Over it, Redux” on February 14, 2018 (Angela Smith/CU Independent).

On Feb. 3 Amanda Bell sat down with performers and CU students Emma Griffith (19), Bryce Rockwell (19), Sofie Lippman (20) and Julia Squeri (21) to discuss this year’s performance of The Vagina Monologues. This year’s monologues will be taking place at Old Main Chapel on Feb. 14, Feb. 16 and Feb. 24. The following transcript has been edited for length and clarity.

How would you describe the Vagina Monologues to someone who has never heard about it or seen it? Or for someone coming to the performance for their first time, what would you say to them?

Julia: In 1996, this woman Eve Ensler went around and interviewed over 200 women about their stories and in the time of 1996, literally saying the word ‘vagina’ was so taboo on the street that this was such an out there thing for her to do. There were riots and protests when the show first debuted in New York.

Essentially what the monologues now are–except for some slight revisions–it’s pretty true to the original script that came out in 1996 that Eve Ensler did as a one women show. It’s just a collection of monologues, vignettes about different women’s experiences covering a lot of topics.

Emma: As much as the show does include and does talk about, it’s not perfect and it doesn’t talk about every issue. Some things it says can be offensive to some people.

It’s not perfect, it’s 20 years old, it’s not entirely up with the times and there are a lot of topics it doesn’t talk about. There is nothing to do with women with disabilities. It’s called the vagina monologues and it doesn’t talk about people who are not women who have vaginas or non-binary people. So, there is a lot of stuff that is not included but also something that’s important.

How did you guys get involved in participating in this?

Emma: I have known about the Vagina Monologues for a very long time, my grandmas directed it, and my aunts been in it. So it’s just kind of something that I’ve been exposed to most of my life. Then, I knew auditions were coming around because I’m on the CU V-Day email list and so I was like ‘this is something that I really wanna do’. So I auditioned and I got in and here I am.

Is it challenging to work with girls who have done it for years before and step into that?

Emma: Not really, I feel like with everything that you do there are going to be people that are more experienced than you and have done it more than you have, and so you just kind of have to roll with that.

So for those doing it for the first time, what is the most challenging thing about the script or the play for you?

Sophie: I think acknowledging that these are from real interviews, so the lines that we’re speaking for are coming from actual voices, and we need to respect those people. For me, where I’m in a piece about transgender people, but I’m a cis woman so I have to respect that I will never know the full experience but I can do my best to have their voices be heard on the stage.

All the profits go to a non-profit organization? Can you talk a little about that?

Julia: Yeah, so when you get the rights to do the show, basically the condition is every single dollar you make has to go charity. So that is the other thing besides just being a play, its a huge activist and charity movement. Every school, every place that does it has to pick a local charity that fits in with the theme against V-Day, which is to end violence against women, and then all of your proceeds go to that. So ours is MESA (Moving to End Sexual Assault). It’s the only rape and crisis center serving the Boulder and Broomfield counties and they’re a really great organization. 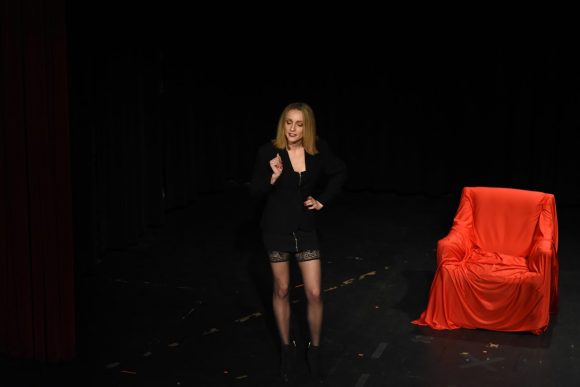 Great, and so how would you describe this organizations relationship with the CU community? Do you feel you have a lot of support from the community?

Bryce: It’s mixed. Especially when were tabling, you don’t even have to say ‘hey, come check out the Vagina Monologues’ some people will literally just stop and come over because they’re like ‘that’s so cool, the Vagina Monologues.’ But with other people, you say ‘vagina’ and they get super uncomfortable. They look at you and then keep their head forward and keep walking.

And then, there are other people that just have never heard of it and are really curious. So I think it’s definitely a mix. We’ve gotten a few people that are like ‘I don’t care about women’s rights. I don’t think they deserve them,’ or something like that. 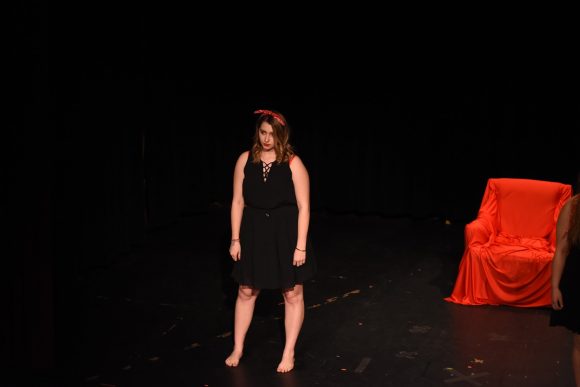 Bryce Rockwell performs “My Vagina Was My Village” as part of The Vagina Monologues on February 14, 2018 (Angela Smith/CU Independent).

What do you want people to take away from your production and performance?

Sofie: I hope it opens a conversation on campus. I totally agree with everything that’s been said. Especially if we do have certain people that pass by our booth and say certain things about caring about women, then they should definitely see the show and we can start this conversation.

I also hope it creates a second wave of monologues for 2018 or 2020’s. I think it’s just awesome that schools across the country get to perform it because even though its the same script, that also allows communication between people in the show who can discuss it and see how they interpret everything differently.

Julia: The first year I saw it I was like “wow, my life has changed” and being on stage did that even more for me. I hope everyone walks away feeling empowered and inspired and also that they’re not alone in a lot of these feelings. This being my third year, I forget how amazing it is that we are all just so off the bat comfortable with each other and sharing all this stuff. 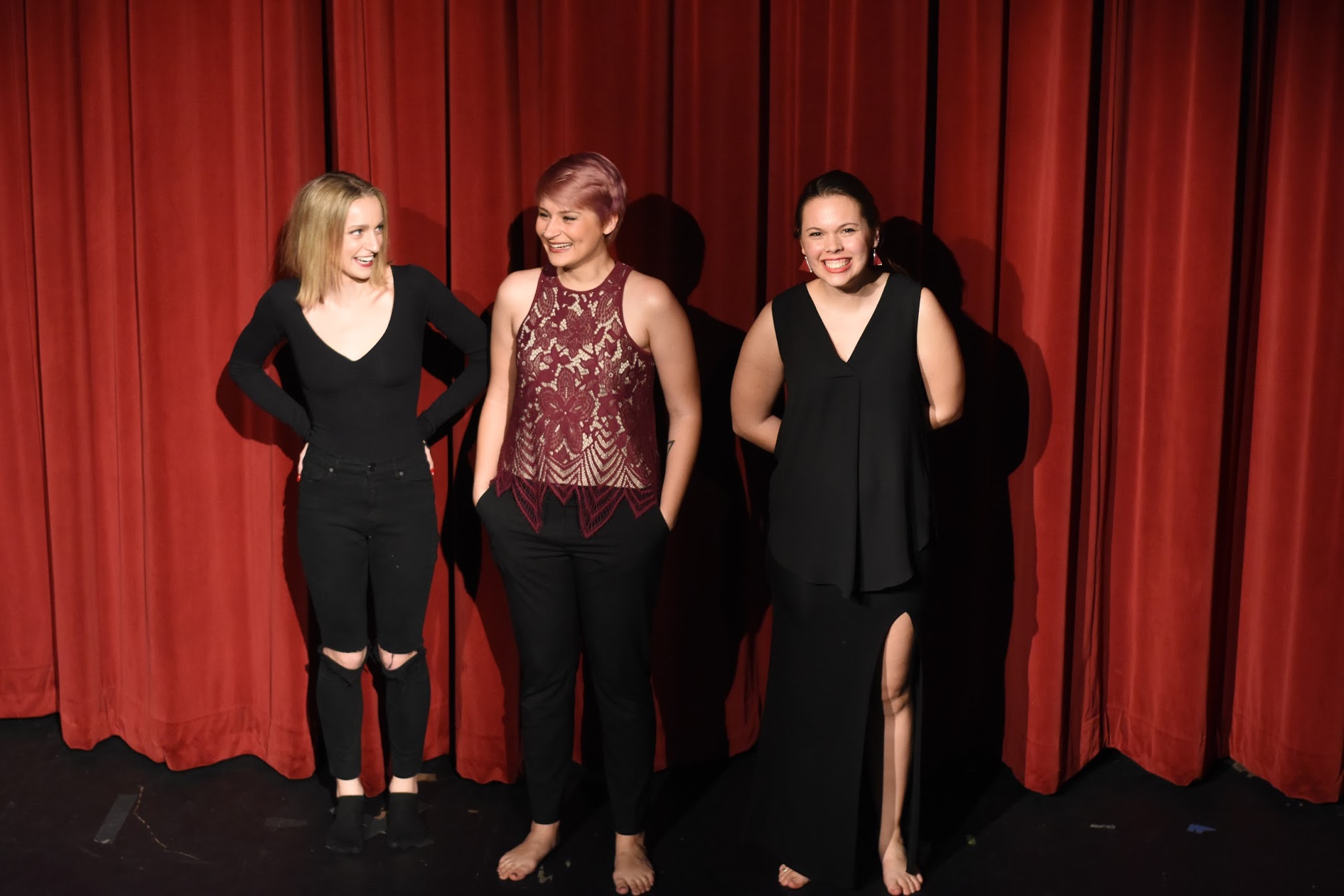 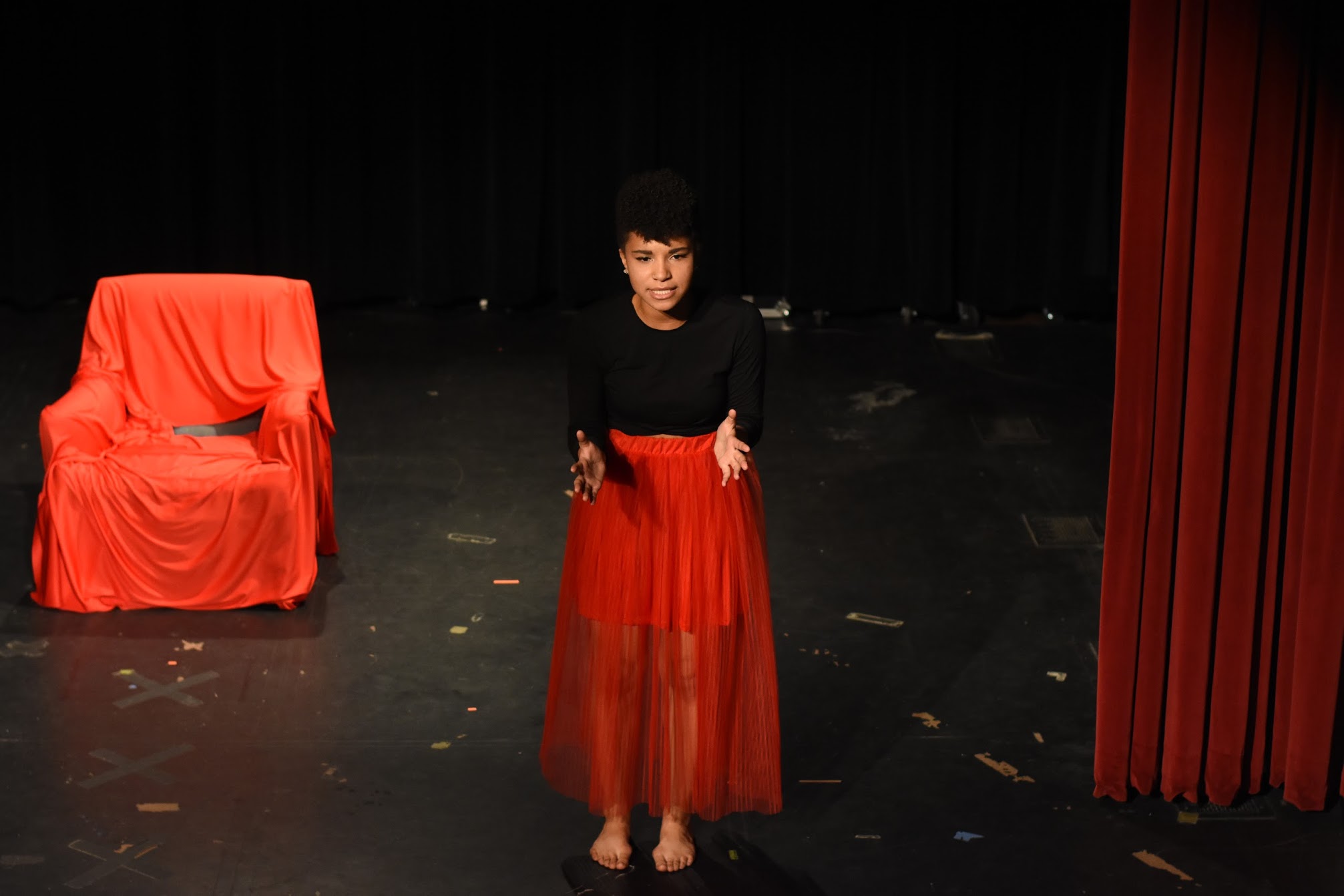 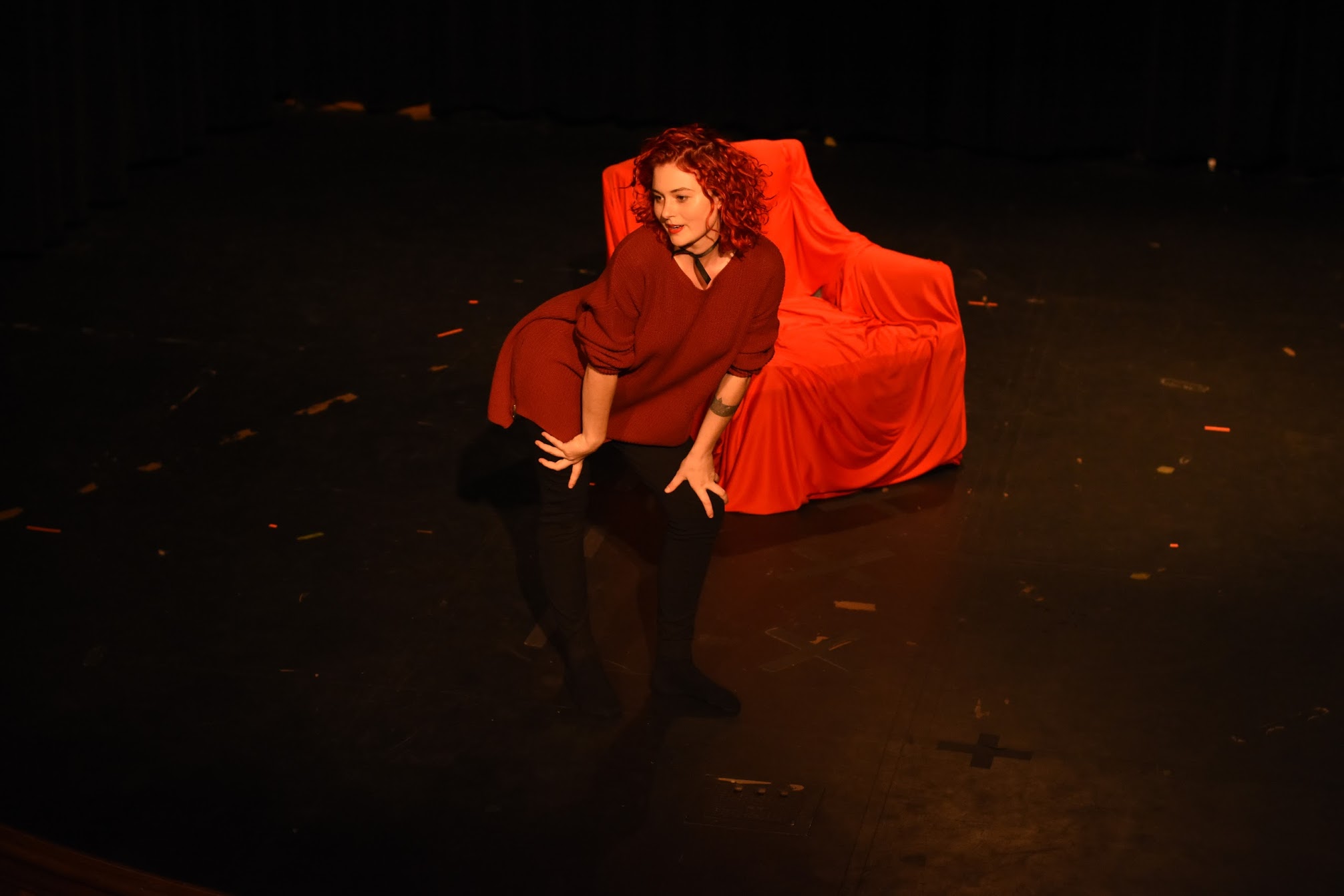 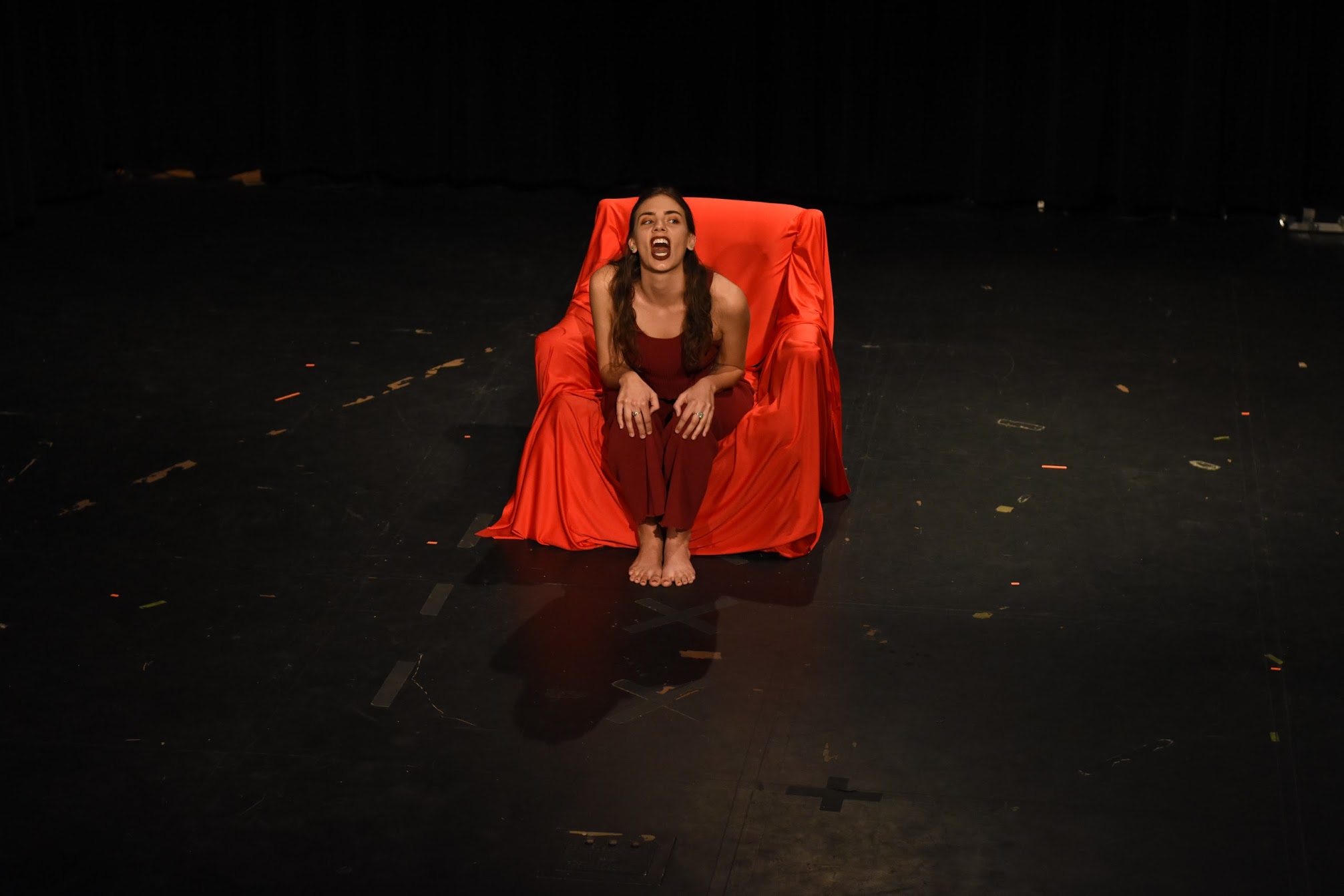