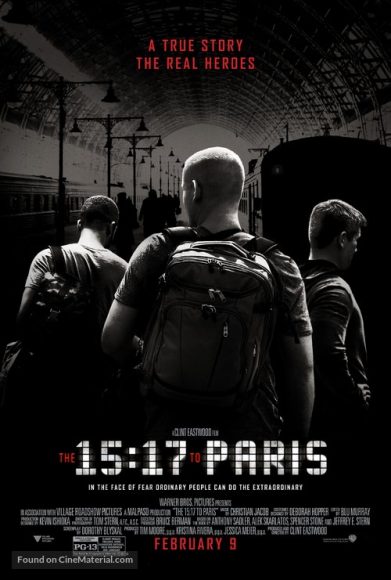 Clint Eastwood is notorious for finishing his films fast and shooting scenes in one or two takes. This technique has often worked for him with successful films such as “American Sniper” and “Gran Torino.” However, taking this approach to his most recent film “The 15:17 to Paris” was a grave mistake.

Anthony Sadler, Alek Skarlatos and Spencer Stone play themselves in the film which tells the true story of how the trio of friends thwarted a terrorist’s plan to kill as many people as possible on a train transporting over 500 passengers from Brussels to Paris.

One of the numerous problems with this film is that this story isn’t meant for a feature-length film. “The 15:17 to Paris” only has a runtime of 94 minutes, but it is a long 94 minutes. It’s an unending, drab, headache-inducing 94 minutes.

The main culprit of this film’s mundanity is the script written by first-time writer Dorothy Blyskal. Blyskal was working with a book written by Sadler, Skarlatos and Stone to adapt their story but it doesn’t seem like it deserves a movie — at least not this one — despite their real-life bravery.

Unfortunately, outside of their 15 minutes of heroics in the film, they don’t do anything intriguing. Obviously, Eastwood and Blyskal are trying to emphasize the fact that these are ordinary people and show the audience that regular Americans can do extraordinary things. But the manner in which they do this is excruciating to watch. Ordinary people may be able to do extraordinary things, but that doesn’t mean they can act.

Sadler, Skarlatos and Stone were able to save the passengers on the 15:17 train going to Paris, but they weren’t able to save the film “The 15:17 to Paris.” In fact, they actively ruin the movie. None of the main trio understand the concept of inflection, making it so they wouldn’t seem out of place in a Tommy Wiseau film.

Eastwood identifies Stone’s abilities as the least-awful and centers the story around him, minimizing the film’s terrible acting. This cuts Sadler and Skarlatos almost entirely out of the film until the climactic train ride.

But Eastwood didn’t seem to anticipate the appalling performances by the film’s professional actors.

These early scenes, starring young unknown actors, are quite possibly the worst of the film. They feature every keynote of the stereotypical after-school special: bullies hitting books out of the hands of our protagonist, getting sent to the principal’s office for being late to class and being yelled at by the gym teacher — awkwardly played by Tony Hale. But an ABC after-school special would be miles better than the first half of “The 15:17 to Paris” and surprisingly less cringe-worthy.

The young actors deliver some of the worst film dialogue in the past decade. Paul-Mikél Williams (who portrays a young Sadler) waxes poetic after a paintball shootout about how he plans on transferring middle schools because he desires to go to prom — yes, you read that right; he’s a middle-schooler who is upset that his school doesn’t have a high school senior prom — but that’s not even the most random moment of this prologue. That honor goes to the scene in which the school principal tells Fischer that her son should move to Oregon and live with his dad, a plot line that is later reconnected.

It is at this point Eastwood fast-forwards and implements the real heroes into the film. After exiling Skarlato to Afghanistan and relegating Sadler to the role of just “the black friend,” Eastwood finds it necessary to create a training montage of Stone exercising, set to the tune of Imagine Dragons.

He follows this up with a travelogue of Stone and Sadler touring Europe. Sadler’s character at this time is boiled down to an Instagram-obsessed, selfie addict who can’t go five minutes without talking about his selfie stick. It’s this kind of screenwriting that makes “The 15:17 to Paris” seem like it was written by a high school freshman who can’t stop talking about their self-published novels.

It’s impossible for any of the actors to give good performances with the dialogue they’re given. But the terrible performances are only accentuated by the fact that these aren’t real actors. Stone is given the most to do and his performance seems like it was inspired by the high school play scenes from “Lady Bird.”

The film does come to life with the crisp 10-minute sequence of the trio disarming the terrorist on the climactic scene on the train. It’s a gripping scene but it’s ultimately forgettable in comparison to the ridiculous scenes that surround it.

“The 15:17 to Paris” was a train wreck — pun intended — from the very first scene and no matter how many heroes the film starred, it was impossible to save.