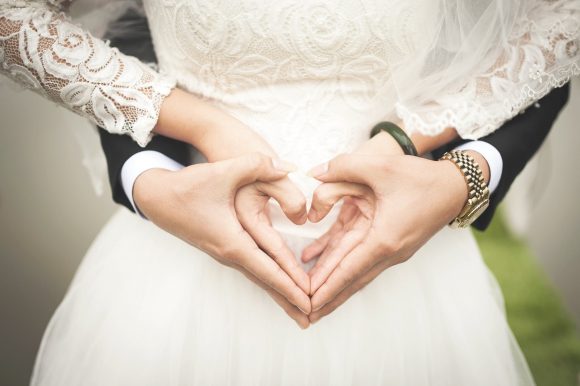 A newly-married couple poses their hands for a photo. (Pixabay)

Insecure and eager, freshmen stroll through campus discreetly scoping out the fresh faces the universe has placed on their doorstep. They walk into their first classes with eyes peeled, so as not to miss an opportunity to make an impression on a fellow student. The first fraternity and house parties are entered with the highest expectations, in hopes of someone picking them out from the crowd.

Our millennial predecessors have pushed the marriage finish line further back, with an unprecedented amount saying no to traditional marriage. Yet, the pressure to find “the one” while in college still looms over students’ heads, creating an unnecessary and unrealistic expectation.

The average marrying age has increased since 1990, from 23 to 27 years old for women and from 26 to 29 years old for men. With this, studies show that there has also been a decline in divorce rates — a statistic that is mostly explained by prolonged singleness. In fact, experts believe that establishing a life on your own ultimately leads to happier and more fulfilling marriages, as partners value independence in their significant others more than ever.

Yet, a survey found that more than half of young adults would rather be with the “wrong” person than be alone. This mentality ultimately causes students to actively seek out someone to fill the spot based on convenience and the negative stigma of loneliness, as opposed to genuine connection and a readiness to commit.

Despite this, source after source claim that college, of all places, is the best place to find your significant other. The close proximity, excess of potential partners and assumed social commonalities force them to ask, “Why not seek out the person to spend the rest of your life with while in college?”

College is a time of freshly understood independence, self-exploration and vast uncertainty of what the future holds. Why would someone seek out their lifelong partner while in college?

The idea of meeting the love of your life right out of high school is one of the bigger attractions of higher education institutions. A new environment with new faces and new opportunities inevitably leads to the hopefulness of new relationships. In fact, over 60 percent of women entering college do so with the expectation of meeting their spouse.

With the expectation that larger schools are better at facilitating matchmaking, because there’s a larger pool of potential partners, failing to find someone to commit to during college feels like the outlying circumstance.

However, contrary to popular belief, within the last five years less than 30 percent of marriages are from college romances. And for good reason.

Those in college relationships neglect to acknowledge that college is not representative of the real world. In many ways, most college campuses reflect some utopian fantasy for young adults who go from one sheltered lifestyle to the next. College provides structured days, excusable hangovers, the luxury of spontaneity and an environment that surrounds you with people of the same privileges.

The Boulder bubble — and its sub-bubble, the University of Colorado — is known for its isolation from normalcy. Thus, an environment of high alcohol intake and very few real-world demands is probably not the most practical to look for the person to spend the rest of your life with.

College is the first time in our lives to be alone and away from family and the comfort zone that defined our first 18 years. Yet, while college campuses pride themselves on promoting liberation and self-exploration, they also support the discreet pressure to find an intimate relationship. This includes factoring into plans a significant other amidst other responsibilities, and prioritizing relationships as a recreational yet mandatory activity.

But between the hook-up culture and serious college relationships, this time leaves us with a persisting contradiction — one that asks us to embrace being alone while also grasping the first opportunities to give ourselves to someone else.

While generations Y and Z might be late to the wedding, the pressure to not be alone in college and to find someone to commit still pokes and bruises. But we no longer live in a time where marriage exists solely as a financial union or a means of controlling sexualization. As the expectation of early marriage dissipates, the expectation to find our lifelong partners at such a young age should dissipate too.

Instead of forcing energy into fulfilling the significant other requirement of young adulthood, which ultimately puts our love lives and our individuality at risk, we should be embracing the ambiguity and vastness of a life after graduation and truly being on our own.