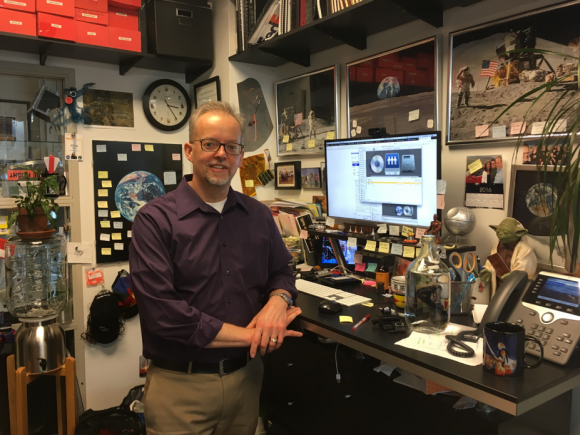 Chris Koehler in his office in the Discovery Learning Center. (Carina Julig/CU Independent)

Most college classes don’t begin with the professor wading into the lecture hall audience dressed in a Star Trek costume and throwing candy into the crowd. But Pathways to Space isn’t just any class, and Chris Koehler isn’t just any professor.

Koehler is one of the primary developers of the Space Minor, along with Steve Nerem and Ashleigh Bailey. The Space Minor began last fall and is now the third most popular minor at CU Boulder, second only to business and Spanish. With over 400 students currently enrolled, the minor has taken flight and is poised to become one of CU’s most unique offerings.

Koehler is a CU alum, who studied aerospace and mechanical engineering before working at Lockheed Martin in Denver. Even as a child he said he was fascinated by anything space-related, and as an adult loved teaching young people about the space industry. He gave high school students tours of CU while at Lockheed, and returned to CU as an employee in 2000 to run the Space Grant program. He taught “Gateway to Space” for 17 years, an aerospace class for engineers where he would impersonate a spaceman alter ego to keep students amused.

Koehler was asked to be on the original committee to develop the Space Minor into a reality. The minor needed to have a required course, which he volunteered to develop “as long I could do some unconventional things.”

And unconventional they were. The course, called “Pathways to Space,” is unlike anything else you’d take in college. 75 minutes long, the class is a whirlwind of activity. Each class period features a different guest, usually a CU professor, who focuses on a different area of space expertise. Lectures are prerecorded by the guest and are required homework for students before they get to class.

During class, Koehler interviews the guest about their background and their work. Then a gauntlet of other activities follows: a student group performs a live-action skit, another group asks the guest questions, then Koehler and the guest get into a large cardboard transport device as a pre-recorded segment of them doing something related to the day’s topic plays on the screen.

Koehler wears a different costume every day – once he came dressed as princess Leia, complete with fake hair buns, another time as Superman, and “flew” into the classroom on a cart. Students have tiny foam rockets that they are instructed to launch when they have an “aha!” moment in class, and every time a guest says something particularly inspiring a bevy of them fly towards the front of the classroom, occasionally getting stuck on the stereo ledge. The classroom, currently Muenzinger auditorium, is decorated with NASA posters and a giant countdown clock runs during class so they stay on track for all their activities. 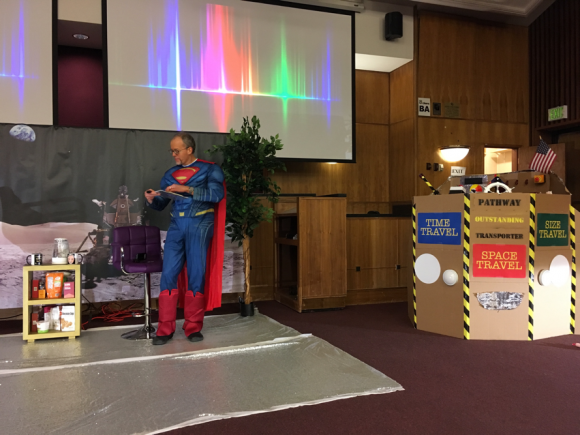 Koehler says teaching the class is “a rush” but also takes an enormous amount of work. There are a lot of moving parts, and each class takes a lot of behind the scenes work to get set up. Still, he said it’s worth it to see students click with the material.

“We take that perception of what a class is on that first day and we crack it wide open,” Koehler said. “And I love to see everyone’s expressions.”

The Space Minor was a project of the Grand Challenge initiative, a nationwide incentive from the Obama administration calling on universities and organizations to pursue solutions to 21st century challenges.

The minor is designed to be a way of connecting students from all across campus to the space industry, not just those in math and engineering. The class list contains courses from every department at CU, and new electives are being developed in the humanities specifically to add to the minor. New this semester are Music and Space and The Politics of Space, which recently had a skype visit from Bill Nye. Currently there are students from 56 different majors enrolled in the Space Minor.

Students who enrolled in the Space Minor as soon as it became available took the inaugural semester of Pathways to Space last spring and still rave about it.

“It was the most fun class I’ve ever taken,” said Allyson Wheaton, a sophomore in engineering physics. “There was no way to prepare for it if all you knew was traditional classes. It was like being on a talk show in terms of format, and that made it so interactive you didn’t even realize you were learning things.”

Wheaton said she’s always wanted to work in the space industry, but before enrolling in the minor it felt like a faraway goal. Now “I’m a lot more confident,” she said.

Junior Troy Lavecchia, a communications major who’s always been interested in science, said he enrolled in the space minor because it looked like a good way to get involved without having to do much math.

“It’s probably the best class I’ve ever taken at CU,” Lavecchia said of Pathways to Space. “That’s the best grade I’ve ever gotten in college, and it wasn’t because it was easy, it was because [Koehler] put everything together so well it was easy to retain.”

Other faculty speak highly of the course as well. Courtney Fell, who works to design courses through OIT’s academic technology department said Pathways to Space is “the coolest thing I’ve ever gotten to work on.” Koehler first approached her team for help in 2015. When he first told her his vision, she remembers saying “You’re crazy. The students aren’t going to get on board with this.” But they came up with a viable class format, and students got on board in droves.

“He decided that he wanted to be bold and step outside the norm with this class,” she said. “He hears those challenges and accepts them fully.”

The space minor is the only program of its kind. While other universities have classes about space, there’s nothing else like this. Bailey, program manager for the Space Minor and former NASA employee, said students from other schools have contacted her with interest about transferring into CU because of the minor.

Ultimately, Koehler said his goal is to keep the minor growing. With CU admitting more students every year, he’d eventually like to see 500 students enroll in the minor per year. Adding a second class to Pathways to Space where students get to design and launch their own creations such as a cubesat — a type of miniature satellite — is another long-term goal.

Koehler’s main challenge is time. Putting together the minor takes a lot of time and energy, and expanding it takes even more. There’s only so much one professor can do. Still, he remains committed to his goals.

Koehler’s colleagues agree that his ambition and hard work are what keep the minor going.

“He has a passion for what he’s doing that is unparalleled to anything I’ve ever seen, even in the industry,” said Ashleigh Bailey. “It’s a huge benefit to the students that the students don’t even realize, because he puts his heart and soul into all of this and that’s what makes Pathway to Space and the space minor so incredible.”

“He really believes in the message of this course, which is that every student can find their pathway to space,” Fell said. “It’s his energy and dedication that’s kept this going.”