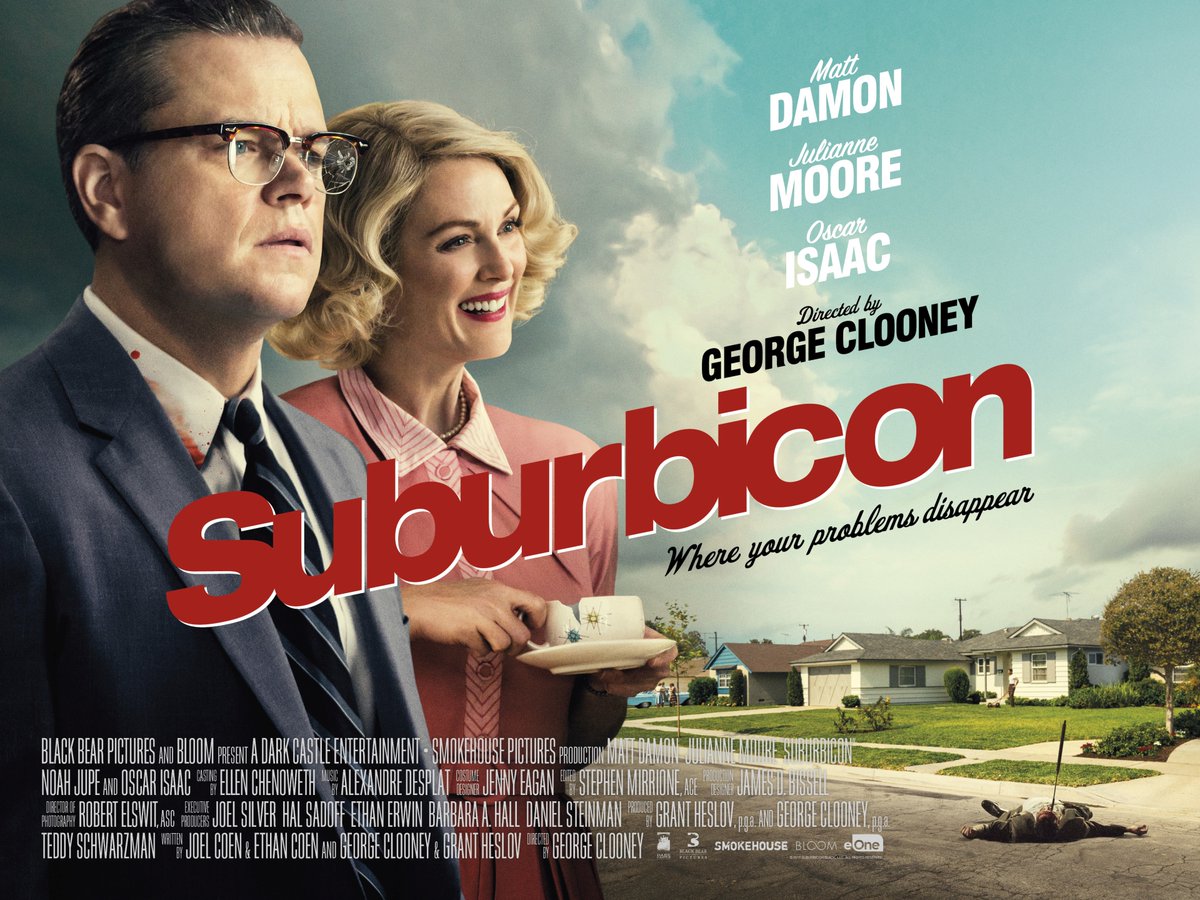 George Clooney released his sixth feature film as a director this past Friday, Suburbicon — two movies merged into one.

Originally written by Joel and Ethan Coen in 1986, Suburbicon is set in 1959 and follows Gardner Lodge (Matt Damon) and his brunette sister-in-law Margaret (Julianne Moore). The two plot to kill Lodge’s wife Rose (also played by Moore, this time as a blond).

Essentially, the original scrips was a practice run for the Coen brothers’ 1996 hit Fargo. Clooney rewrote it with co-scripter Grant Heslov, who has worked with Clooney on several films, including As Good Night, And Good Luck and The Monuments Men. Together, they added to Suburbicon a storyline about an African-American family who moved into a white, cookie-cutter suburb and immediately become the center of controversy.

This tacked-on storyline doesn’t work at all. It’s a reproduction of the 1957 Levittown riots that centered around the Myers family, renamed the Mayers in the film. The family are constantly ostracized wherever they go, whether it be the grocery store or their own house.

This isn’t a sober retelling of that story. Clooney doesn’t even bother to give first names to Mr. and Mrs. Mayers (Leith Burke and Karimah Washington). The characters are simply abstractions. Clooney seems to think that by stapling racial politics onto an old Coen brothers script, he is being virtuous — he’s not.

Clooney opens the film with the Mayers moving in but then spends the majority of the next 90 minutes focusing on the Lodge storyline. He marginalizes the black characters by adding them to the story only to forget about them and not give them a voice.

This is a condescending characterization that reproduces everything bad about what he’s critiquing in the guise of being forward-looking about our current political movement.

Because it was written by the Coen brothers, the noir story had all the interesting and good content. This isn’t to say they wrote a flawless screenplay — the first 40 minutes of the film are a bore. Oscar Isaac eventually comes in with an invigorating performance as an insurance investigator to save the movie while it’s on life support.

Suburbicon flies by fairly smoothly from there. No one delivers the same level of electricity that Isaac does in his two scenes. Damon is consistently able to deliver a good laugh with his incessantly baffled demeanor, which keeps the film watchable. But he’s not capable of making the movie good.

The farcical nature of the Coen’s noir story doesn’t coincide well with the serious nature of Clooney’s added Mayers’s plot. Clooney was unable to balance his socially conscious half of the movie with the Coen’s zany, mob-noir half. It’s a tough tightrope for any director to walk, and Clooney definitely doesn’t display that level of talent.

Jordan Peele’s Get Out, released earlier this year, was able to subtly balance humor with horror in a movie that was pointedly political. Suburbicon, on the other hand, is a well-meaning film, but it’s so ham-fisted that it’s not a useful movie that provokes thought.

By Frankensteining an old Coen brothers screenplay and shoehorning his political sentiment into the script, Clooney created a movie that is tonally dissonant and lacking self-awareness.

This tonal war creates the sense of two movies. But two movies for the price of one isn’t a good deal when both are bad.