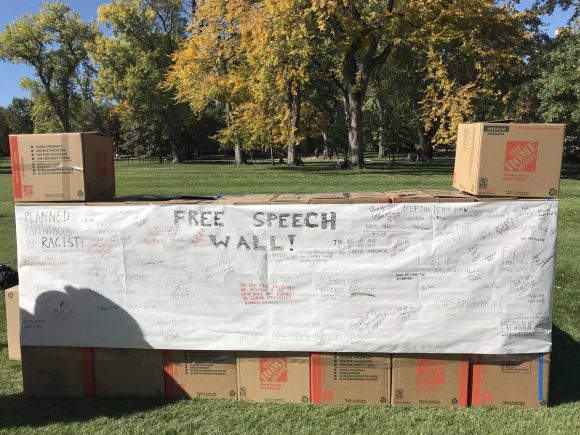 Oct. 17 was like any other fall day on campus at CU except for one thing: Turning Point USA, a conservative youth organization, constructed a free speech wall in Norlin Quad.

I fully support the free speech wall, as long as it does not come at the expense of another person’s well-being. Sadly, much of what was written on the wall is a direct attack on groups already facing oppression. The free speech wall seems like a good idea in theory, because it allows people to voice their opinions that might otherwise be overlooked. Although, it is not an effective way of practicing free speech due to the fact that it sometimes serves as a direct attack on certain identities.

Sadly, some of the words inscribed created the opposite of a peaceful atmosphere and targeted demographics such as people of color, women and LGBTQ identities. Concerning and hateful things written on the wall include phrases such as “Women in America Aren’t Oppressed” and “There are only two genders!” Both of these phrases present obvious issues: the first one by not recognizing the inequity that women in America face in comparison to men and the latter by refusing to recognize genders other than male and female.

Worse, this statement rationalizes the statements on the wall that target certain oppressed groups by rejecting the fact that what they are saying is hateful. The statement is menacing to minorities because it isolates them by delegitimizing their real and experienced struggles and oppression. Such hate speech creates an unsafe, unwelcome and unacceptable environment on campus (a campus that preaches about supporting diversity, mind you).

On the other side, many people see the free speech wall as a way for individuals with conservative views to voice their opinions. The use of this platform as a way to voice conservative opinion, though, can get out of hand if it marginalizes minority groups.

This is not to say that people with conservative views don’t deserve to be heard. After all, that is the objective of free speech.

Not only are people writing offensive things on the free speech wall, but the wall is also making it easier for these hateful manifestos to mobilize and spread. The idea that some people are less human than others is being reinforced and justified by many individuals that truly believe that it’s okay to think this way.

In recent news, football player Colin Kaepernick has become a fixture in the discussion regarding free speech. Phrases reprimanding Colin Kaepernick’s decision to kneel ironically fail to recognize that Kaepernick is an example of someone practicing free speech without harming anyone. Some may try to argue that by kneeling, Kaepernick is disrespecting veterans, but at no point in time has he made any blatant statements that may be seen as an attack against veterans.

If you ever find yourself with the opportunity to participate in the free speech wall, maybe take a minute to step back and consider what free speech really is. One thing is definite: hate speech is not free speech.

Free speech can only go so far before it turns into fighting words or words that are disturbing the peace, which are a direct threat to the First Amendment. Many individuals, often conservative, battle for protection of  free speech only to end up protecting hate speech — speech that threatens free speech.

Libby is a student in her third year studying Journalism with minors in Business and French. She is the head Opinion section editor. Libby loves working with people and having the opportunity to learn from and help others through her work.