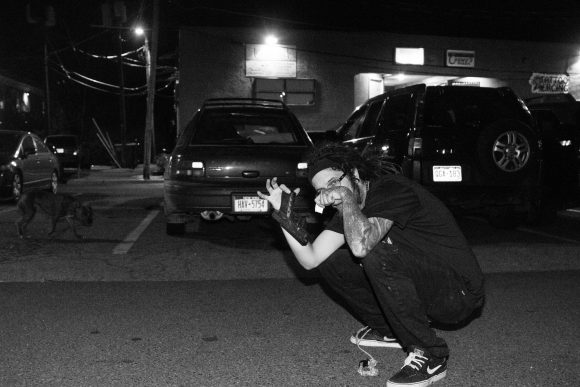 A man shows a pistol and bag of drugs in the parking lot above Cosmos. (Jackson Barnett/CU Independent)

I pressed my toes into my flip-flops so they would stay flat against my feet the first time I ran for my life. I had seen a gun before. I had seen one in the hands of my father and my little sister, and even in my own at gun ranges in Wyoming. But this time, the black pistol dangled from the hands of a drug user with a face tattoo, whom I had photographed while on assignment for the CUI.

There was no way to know if his gun was loaded, or even real. But I didn’t want to wait around to find out.

Last night, over 500 people found out that a man hiding in a hotel room above a country music show did have a loaded gun, did pull the trigger and did kill 59 people.

After this tragedy, politicians send their thoughts and prayers. But they shouldn’t, nor should we play the same broken record. That template of grief won’t take away the gun that has been put to the head of the American people by groups like the NRA and their political cronies. Politicians who only send their thoughts and prayers have allowed innocent blood to drip into the supposed “land of the free.”

But how can we be free knowing that in a nightclub, movie theater or kindergarten bullets can deny the right to life, liberty and the pursuit of happiness?

Trump, the president who received the earliest endorsement by the NRA, called the shooting in Vegas “an act of evil.” He is right. It is evil, but it is also evil that he, and our government, has allowed this to happen for too long.

Paul Ryan, Mitch McConnell and Trump did not make that man end those lives, but they gave him access to the tools to do it.

People will say this is not just a gun issue. And yes, this is a mental health issue, a safety issue and a cultural issue. But at the core of all of it, this is about the roughly 300 million guns in America, and the 19 the FBI found in the shooter’s home, many of which he bought legally.

When a bomb goes off in Kabul, people glance out the windows, meetings stop for people to call home and after a quick check-in people return to their daily lives, or so someone who once lived there told me. In America we don’t have ISIS or the Taliban, we have Dylan Roof, Omar Mateen and Adam Lanza. Guns killed more people than all the suicide bombs in Afghanistan in 2016 — over 3.5 times more.

We know this. The facts have proven time and time again that America is the only place mass shootings happen. But unfortunately, those who willfully ignore the reality of guns in America hold those who don’t captive.

This cycle plays itself out every time someone dies in a shooting in America. People like me beg for a rational response to the violence, such as stricter background checks, requiring proper gun storage or — God forbid — a buy-back program. People like White House Press Secretary Sarah Huckabee Sanders fire back with their moments of silence, then fill the void with their spin. Eventually, we forget about it until the next news alert comes.

Don’t send your thoughts and prayers, because that’s not enough. Don’t let the 59 people that died in Las Vegas slip past the headlines until they are replaced by another tragedy.

After Orlando, I thought something was going to change. Even people in my family, strong conservatives, began to soften on agreeing with simple restrictions on guns. I thought that Congress would listen to the 92 percent of people who want expanded background checks, the 87 percent of people who want to make sure felons and the mentally ill don’t own guns or the 85 percent of people who don’t want people on federal watch lists to have guns. But I was wrong, and now the lives lost in Orlando have been brushed aside to welcome a new crop of innocent people dead at the cost of political inaction.

Save your constitutional whining for the courts, it’s time to tell Congress to act as a democracy should. Hold those we elected responsible for representing the people who put them in office, not those who funded their campaigns.

This time, break the cycle. Don’t send your thoughts, send letters to your congressmen. Don’t send your prayers, loudly live with the weight of being a part of a country that allows this to happen to our fellow citizens. Don’t tweet, post or email what people say every time this happens.

Break the cycle and don’t let the blood that was spilled Sunday be washed away by the do-nothing Congress and their gun loving backers.