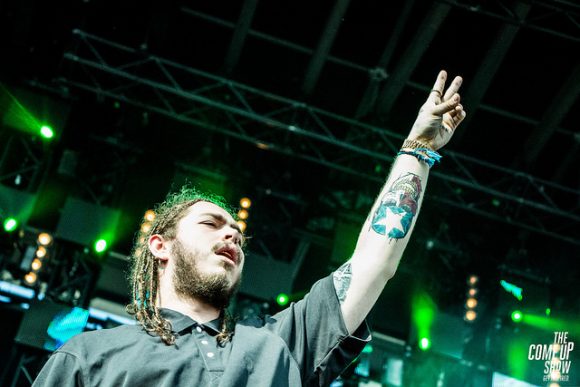 Post Malone performing at Veld Music Festival in July 2016. (The Come Up Show/Flickr)

I have to extend my congratulations to Post Malone and opener Smokepurpp for putting on one hell of a show last Tuesday at Boulder Theater. The sold-out show outperformed everyone’s expectations. When I arrived at the venue about 30 minutes before the show started, the line to get in was wrapped around the block — a rare occurrence for a show at Boulder Theater. I managed to get into the venue just when the show started.

Smokepurpp was the ideal opener. His debut mixtape, Deadstar, containing features from Travis Scott, Chief Keef and Yo Gotti, was released on Sept. 29. Unfortunately, his brief 15-minute set only allowed for him to perform a very limited number of songs, the most notable being his banger, “Audi.” By around 8:45, he left the stage.

About 15 minutes later Malone’s DJ came onstage to hype up the crowd. While exciting at first, the set was too long and people began to grow anxious for Stoney to come on. Finally, around 9:30, Malone came onstage re-hyped the crowd by performing “Too Young” with a drink in his hand.

Malone has come a long way since the release of his breakout single “White Iverson,” which is now a four-time platinum track. Malone’s music has been described as a “melting pot of country, grunge, hip-hop and R&B.” Most of his influence seems to root from growing up right outside of Dallas. Even his set design contained Texan influences with its wild west saloon theme.

For the first couple songs, something seemed off about Malone. A couple people around me were claiming he was high. It didn’t occur to everyone, until Malone explained it, that he was still trying to adjust to the altitude. After a couple of bottles of water, he seemed to adjust and continued with his set.

Towards the middle of his phenomenal set, a chair and sparkly guitar were brought out for a two-song acoustic set consisting of “Feeling Whitney” and a chilling rendition of Nirvana’s classic “All Apologies” that left me with goosebumps. As an emerging hip-hop icon, I had completely forgotten about Malone’s skilled guitar playing. He kept marvelous time by himself and there were no notable errors in the songs, even while he held a lit cigarette.

Malone ended the set with his banger “Congratulations” before beginning a 30-minute DJ set, showing off even more of the Dallas maverick’s many talents. The DJ session was filled with smooth transitions and a number of turntable tricks.

My only disappointment about the show was that he didn’t perform “Broken Whisky Glass.” I assumed it would be his opening song, but it never made an appearance in his set. However, he included a number of other notable tracks, including his song from the Fate of the Furious soundtrack, “Candy Paint.”

There’s no question as to whether or not I would recommend seeing Post Malone live. He was beyond brilliant and the next time I see him, I’ll be sure to get to the venue much earlier than last time.