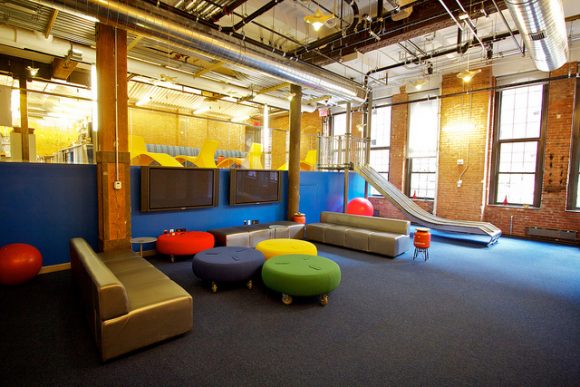 A peek inside the Google office in New York. (Marcin Wichary/Flickr)

I am a senior in college graduating in the spring. My parents have constantly emphasized hard work and motivation as key components of getting a good job, no matter what my major is. They always drive me to be independent and self-reliant and to reach a point in my career where I no longer depend on anyone for anything. However, as I am starting to apply for jobs and figure out my life post-graduation, they are quickly becoming fed up with my future expectations.

I want to live in a big fancy city: New York, Chicago, Los Angeles, San Francisco, Seattle, etc. I could never handle a 9-to-5 desk job. I refuse to work in an environment that would require me to dress business-professional every day. I prefer beanbags and standing desks with city views over closed off cubicles. I want to have fun at my job while having a lively social life outside of it. I want a golden retriever and a cozy, one-bedroom apartment.

As a journalism major, I realize that my first few jobs won’t be paying the big bucks. I am very fortunate that I will be graduating with no debt and my parents have offered to help with the big expenses while I get settled. However, my parents also never fail to remind me of their humble beginnings, having received no help from family, accepting the first job they were offered no matter where it was located and settling down as quickly as possible.

My dad never imagined that he would get a job in Denver and live there for 15 years while he was growing up in India. Meanwhile, I have been dreaming about living in Brooklyn for most of my life.

We are millennials, the “dreamer” generation. Our parents, referred to as “Generation Xers,” have much more “realistic” expectations because their parents grew up in a time of economic uncertainty. We grew up in the 1990s and early 2000s, a time of economic prosperity in the United States. There is a direct correlation between the economic climate at the time of our upbringing and our expectations and goals for the future.

We grew up in the midst of a technology boom, which fueled our desire for something more. For example, due to a recent Snapchat update, I am able to tap anywhere on Snapchat’s world map and see what people are doing in Dubai, Shanghai, Rio de Janeiro, Miami, etc. We are avid users of social media, and it connects us to every corner of the world. We are no longer limited to how people are living in our immediate surroundings.

Movies like The Internship portrayed working at Google as an extremely progressive, self-paced, fun and colorful experience. According to Mashable and Business Insider, the movie depicted it pretty accurately. This gives millennials an impression that jobs are supposed to be enjoyable and amusing, while providing a great salary and allowing a vibrant social life.

As a millennial, I realize my dreams are at times outlandish, but I pride myself on having higher hopes and expectations for myself than my parents and grandparents. Despite popular belief among older generations, we are still believers of hard work, but the world is much bigger now than it ever was. New jobs are being created every day due to technological developments, social media and other major cultural shifts.

Our parents have done an incredible job of raising us in a time of many radical political, social, technological and economic changes. As we enter the workforce, we don’t intend to forget our own “humble beginnings,” but we are also ready to change the world and vehemently go after what we want.