Opinion: The Colorado Avalanche are really, really bad — here’s why

Recently, the Colorado Avalanche was the first team to be eliminated from playoff contention, continuing a string of losing seasons for the franchise. The team has posted a 22-54-3 record (47 points) on the 2016-17 season and trails the St. Louis Blues, which currently is holding on to the final Wild Card slot in the Western Conference by 36 points — the largest point deficit in the NHL.

With only 47 points on the season and just three games remaining, the Avs are on track for a record-low season — the worst full season the team has experienced since the franchise moved to Denver from Quebec in 1995. The Avs have only outshot enemy teams 27 times this season, averaging just 6.4 shots more than their opponents in those games.

On the flip side, Colorado has been outshot a staggering 49 times, with teams averaging 9.4 shots more than the Avs in those games. Since Jan. 18, the team has been without its starting goalie Semyon Varlamov due to a groin injury. That injury put him on the injured reserve for the remainder of the season.

Varlamov, who was drafted in the first round (23rd overall) in the 2006 draft by the Washington Capitals, joined the Avs in the 2011-12 season. Since the 2013-14 season, his winningest season with the Avs, he has been struggling to keep the puck out of the net. He has not been able to bring his goals against average below the NHL average in any other season but the 2013-14 season.

The same could be said for his save percentage, which was only higher than the league average during the 2013-14 and 2014-15 seasons. 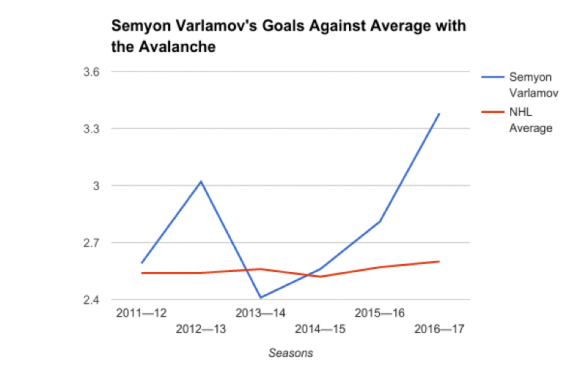 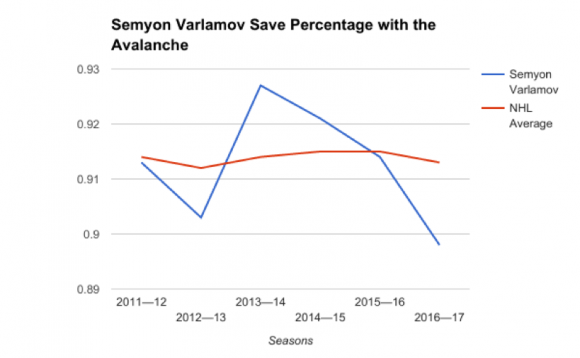 Semyon Varlamov’s save percentage with the Avs this year.

The Avalanche are also dead last in the NHL in goals scored per game, averaging just two goals per game, which is well under the league average of 2.81. This ties them with 2001-2002 Columbus Blue Jackets as the third-lowest scoring team in the NHL since the 1999-2000 season. This was the first season in which the modern scoring system was in place, where the league awarded teams with two points for a win in overtime or regulation, one point for a loss in overtime and zero points for a loss in regulation. 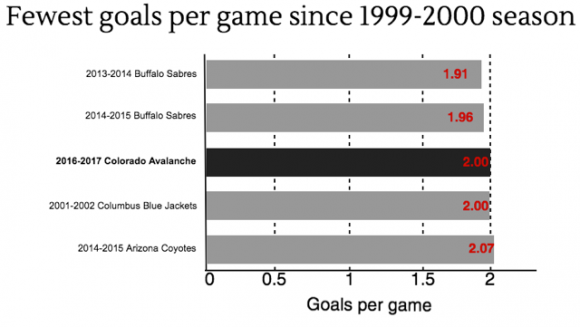 One of the most evident reasons why the Avalanche are not producing wins is because the team is not creating enough opportunities to score in each game. They are the worst team in the league at generating scoring chances when they are full-strength, creating just over six chances per 60 minutes.

When they are able to create chances, the team is terrible at converting. Colorado is ranked second to last in Corsi Shooting Percentage, the percentage of shots taken by a team or player that are goals, with less than 4 percent of the shots they take finding the back of the net.

The team has also been unable to rely on center Matt Duchene to produce offensively, having been on a scoring slump the last few months. He is on track to record his second-lowest scoring season in his career if he earns less than six points in his remaining three games.

Duchene has traditionally been one of the Avalanche’s top forwards since he made his NHL debut in the 2009-10 season at age 19. In his last seven seasons with the Colorado, he has averaged 1.31 points per game. In the nine games before the team’s 4-3 win over Chicago on Tuesday, he did not register a single point.

Another red flag for Colorado: only two players on the team have recorded a plus rating this season — J.T. Compher, the left winger who has only played 18 games, is plus-one and center Samuel Henley is plus-one after playing just one game. On the other hand, some of the team’s most productive offensive players are nowhere near breaking even.

Duchene is at a minus-33 on the season and Nathan MacKinnon is minus-16. That translates very clearly on the scoresheet for their opponents, and for the Avs, that means a lot of losses this season.

Colorado will finish the season dead last in the NHL with the hope of securing the first overall pick in the 2017-18 NHL Entry Draft and also confirming the team’s worst season record since coming to Colorado in 1995.

Many question marks surround the Avalanche, including Duchene’s future in Denver. Hopefully Colorado can find another Connor McDavid this summer and begin a much needed process of rebuilding.

Lindsay and Tate steal the show at Folsom Field...

Scoreless second half dooms CU as Buffs fall to...