A crowd of thousands came to Denver’s Civic Center park for the “Protect Our Muslim Neighbors Rally” on Saturday. The group came to protest President Donald Trump’s executive order barring refugees and citizens from seven majority-Muslim countries from entering the United States. About 9,000 people attended, based on the Facebook event page numbers.

Protesters gathered at the north side of the park to kick off the rally with songs and music. In unison, everyone sang: “Refugees are welcome here, Mother Earth is everyone’s home” to the tune of patriotic anthems. 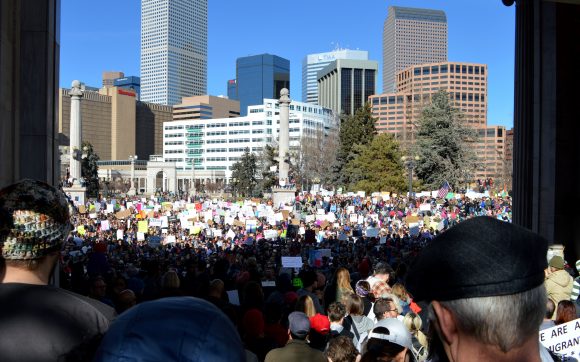 An activist going by the name of Queen Phoenix organized the rally and introduced the many speakers who shared their perspective with the crowd. “Today we are here to honor and support our Muslim neighbors,” Phoenix began.

When she asked who was not a practicing Muslim, over half of the crowd raised their hands. Despite not being affected directly, protesters came out to demonstrate support for those who may be impacted by the Trump administration’s policies and rhetoric.

Iman Jodeh, the Colorado Muslim Society’s non-religious spokesperson, shared her story of being a Palestinian-American whose parents were refugees fleeing persecution.

“This is my identity, and I am very unapologetic of who I am,” Jodeh said. “We all have one simple thing in common: We are all human.” 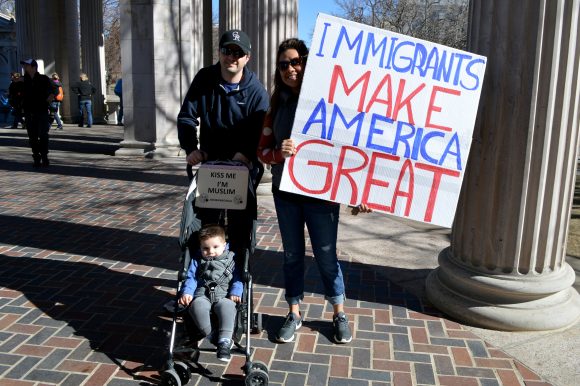 Martha and Mustafa Menekse attended the Protect Our Muslim Neighbors Rally with their son in Denver on Saturday, Feb. 4, 2017.

She encouraged protesters t0 embrace their own individuality and to explore the identities of others to gain a greater understanding of what is unfamiliar. The Interfaith Alliance of Colorado spoke collectively, as each person represented a separate religion coming together in a “grounded reality” of humanity and compassion.

The messages hit home for people like Martha Menekse, who attended the event with her husband Mustafa and their 16-month-old son. Both her and her husband immigrated to the U.S., coming from South America and the Middle East, respectively. She held a sign saying “Immigrants make America Great” and said that the president’s actions took a personal toll on her “because he shames women and Muslims.”

Zahra, a high school student and Iraqi refugee who spoke at the rally, said, “I find it utterly cruel Trump is depriving people of the dream my family once had.” She said Islam is a religion built on tranquility and love and lamented how people’s perceptions of her faith have been marred by the mass media and public policy.

“I’m here because I believe in equality and tolerance,” said Claire Founie, a Colorado native who was dressed as the Statue of Liberty. 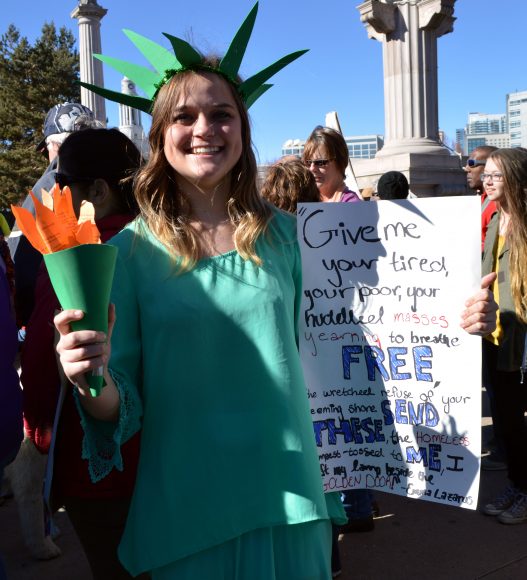 Claire Founie, a Colorado native, dressed as the Statue of Liberty to show her support for the Muslim and refugee community in Denver at a rally on Saturday, Feb. 4, 2017.