I am so incredibly sick of seeing ignorance on every social and news network I turn to.

Since the events in Paris, I have read numerous Facebook posts and hateful comments from citizens and political figures in regards to Islam and Syrian refugees. The thing is, this kind of Islamophobia has been prevalent for years and years. It’s because of this societal mentality that I didn’t tell a single soul my dad was from Syria until my first year of college. I was scared of the ignorance and the prejudice, so I stayed silent.

Now I will refuse to be silent.

The world is full of generalizations against entire demographics and it’s not fair. We’ve all heard the “jokes”: Blaming theft on the only black kid at the party. The Jewish kid refusing to ever share or lend money because he is “Jewish.” The Arabic kid whose family are terrorists. The Asian whose family beats him if he doesn’t get an A in all his classes. The Hispanic kid who is automatically “a Mexican” and whose family only works low-income labor jobs.

These stereotypes are all extremely stupid, ignorant and invalid.

In case you didn’t know, there are 784 active hate groups in the United States. There are 72 active Ku Klux Klan groups and 142 neo-Nazi groups. Americans are in no way, shape or form “perfect” either. Hate and evil is everywhere.

Not every German person is a Nazi. Not every white person is in the KKK.

Not every white person shoots down schools, churches, or movie theaters either.

Therefore, not every Arabic person is in any way, shape, or form supportive of ISIS.

I’m not undermining how screwed up ISIS is or what happened in France recently. What I am saying is that innocent Arabic people who have absolutely nothing to do with extremism do not deserve to be hated in correlation.

Let’s learn from our past mistakes. During World War II, the U.S. turned away thousands of Jewish refugees due to security concerns. They ended up going back to camps where most of them suffered and died because the US was scared a Nazi spy would be hiding among them.

My family, who once resided in Damascus, Syria, was forced to leave their homes, jobs, friends, schools and lives for their own safety. If you want to talk about “fear,” America, try leaving everything you ever knew to move into a foreign country with a language barrier. Try prioritizing simply surviving. My family has no opportunity; no bright future to look forward to. All they do is work, because all they are trying to do is get by. Life is not easy for a refugee.

In addition, my cousin has been in jail in Syria for over two years, since he was 16, for protesting against the government. Keep in mind that the corrupt jail in Syria is nothing like jail in the U.S. Because of his stifling regime, my family in Syria refers to President Assad as “the new Hitler.”

We hate what we fear, and we fear what we don’t understand.

Everyone that says that Islam is a hateful religion couldn’t be more wrong. Islam literally means “peace.” The religion’s texts contains the notion of “halal meat,” which is when animals used for human consumption are killed in means of avoiding suffering. One of the five pillars of Islam is Zakat, which is giving to those in need. This is in no way, shape or form a religion that promotes violence.

So for the last time people, ISIS is in no way an accurate representation of Islam.

Fear and hate is going to eat us alive. Let’s look at these Syrian refugees with love and compassion. If your government turned on you the way that President Assad turned on Syrian people, you, too, would hope people would open their hearts and homes to you.

We are giving ISIS the power they want by proving through Islamophobia that westerners and Islamic people can’t coincide. Let’s not hate one another because of the way that we pray, look, speak or marry. 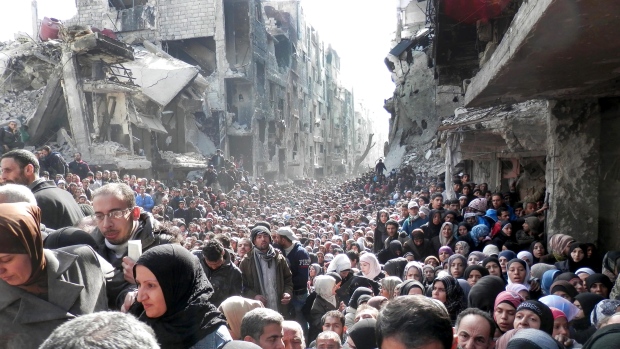 This picture taken on Jan. 31, 2014, and released by the United Nations Relief and Works Agency for Palestine Refugees (UNRWA), shows residents of the besieged Palestinian camp of Yarmouk, queuing to receive food supplies, in Damascus, Syria. (UNRWA via AP, File)