In fourteen hundred ninety-two, Columbus sailed the ocean blue. He had three ships and sailed from Spain, oh, and by the way… the Indigenous were slain.

The light-hearted childhood rhyme about ol’ Christopher Columbus neglects to mention his violent history of genocide, extortion, and rape of the indigenous American peoples.

The truth about Columbus isn’t common knowledge. No wonder — from elementary school, we learned about his “legacy” as a brave voyager, responsible for finding the New World. Yet, the curriculum kind of glossed over the part about natives who had already lived there for more than 12,000 years. That’s exactly why Columbus Day should be renamed to Indigenous People’s Day, to give tribute to the true founders of the New World.

We made cute craft models of the Niña, Pinta and Santa María to illustrate the narrative, but our smiley kindergarten teacher didn’t say that the natives were forced into harsh labor in gold mines. After that revenue source was completely exploited, young girls were forced into sexual slavery.

In his journal, Columbus wrote, “Now that so much gold is found, a dispute arises as to which brings more profit, whether to go about robbing or to go to the mines. A hundred castellanos (a bit more than 100 dollars) are as easily obtained for a woman…there are plenty of dealers who go about looking for girls; those from nine to ten are now in demand, and for all ages a good price must be paid.”

That’s just the tip of the iceberg. It’s likely that upwards of 10,000 natives died from blood loss when Columbus and his men cut off their hands. His Spanish accomplices hung them, roasted them on spits, burned them at the stake and dismembered children to be used as dog food. 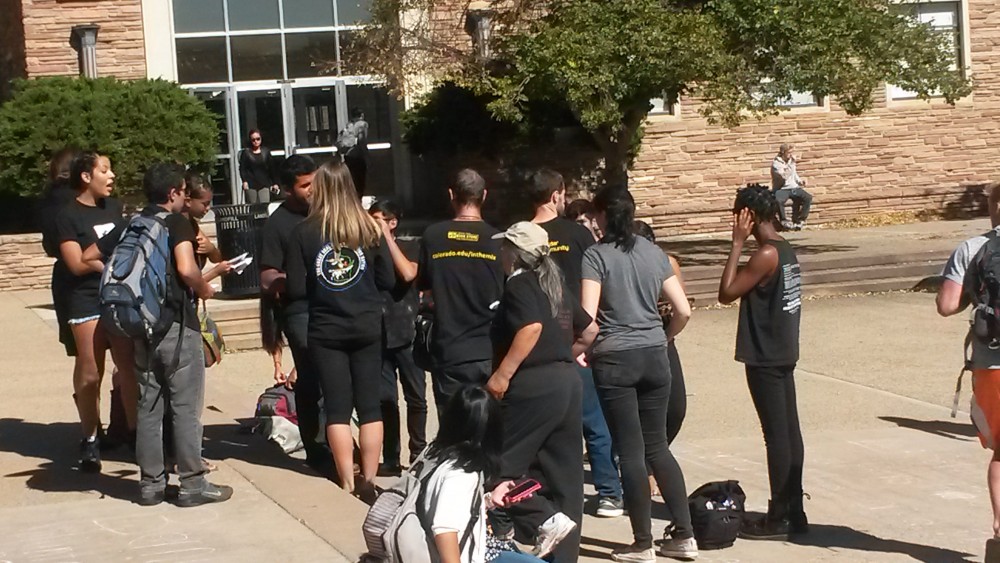 On Monday, a group of CU students staged a peaceful demonstration to protest the mass murderer Christopher Columbus and his federal holiday, insisting that it should be renamed to offer remembrance for those who lost their lives during Columbus’s supposed “discovery”. Ryan Avila, a sophomore studying sociology at CU, organized the protest. He thinks the holiday is an erasure of the identity and the history of indigenous people in America.

“Going into somebody’s space, telling them what to do, reorganizing things and telling them this is…how you should live,” said Avila. “That’s what Columbus perpetuated when he came here.”

Avila and 15 other students marched to the UMC fountains wearing black shirts and buttons with the logo ‘Indigenize, decolonize’. The demonstration included a part when students laid down on the ground to symbolize their ancestors who had died at the colonists’ hands.

“We’re not okay with celebrating Columbus…really, was he a good person if you look at what he did and at the aftermath? People were there before,” said Avila.

Since 1977, Native Americans and their allies have attempted to change the federal holiday to one that recognizes their heritage; their efforts have been largely rejected. However, thanks to actions like the organized student protest at CU on Monday, that sentiment is changing. This year, Albuquerque, New Mexico, Anadarko, Oklahoma, Portland, Oregon, St. Paul, Minnesota and Olympia, Washington ditched Columbus in favor of Indigenous Peoples Day. The Denver city council also agreed to rename the holiday after a unanimous vote Monday night.

We can only hope that with more awareness to the pressing issue, cities all over the United States — including Boulder — will follow suit.