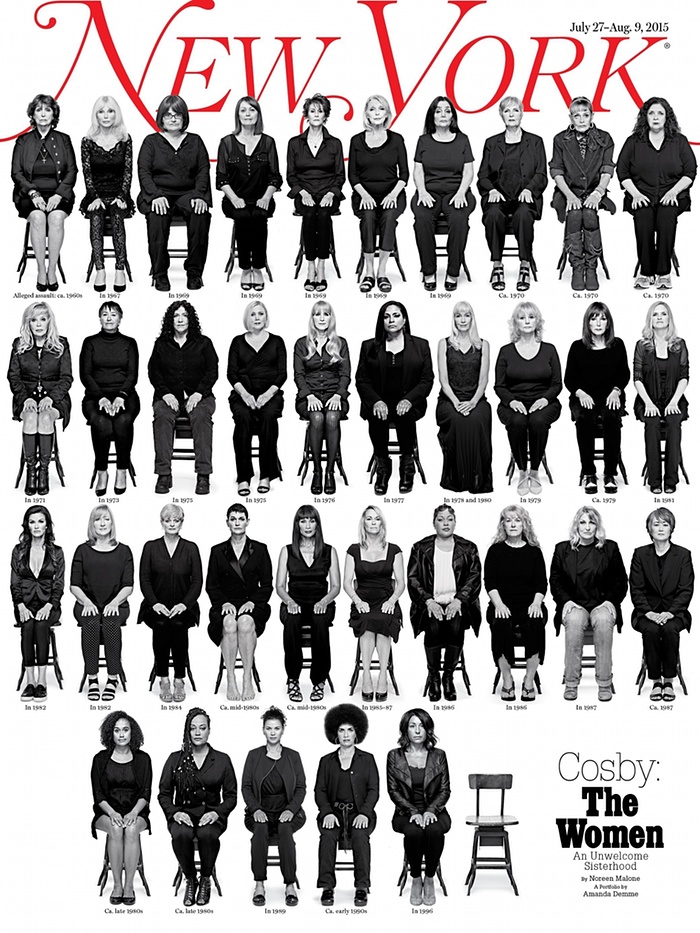 A Photo from New York Magazine that shows 35 of the 46 women who have sexual assault allegations against Bill Cosby that span five decades. (Amanda Demme/EPA)

This summer, the House of Representatives introduced the Safe Campus Act as proposed legislation regarding the handling and reporting of sexual assault on college campuses. If passed, it would enact a mandatory stipulation requiring assault and rape victims to report to police before the university is able to take action. Another section of the bill allows universities to set their own standard of proof regarding rape and assault cases.

Groups that work with rape victims on college campuses have vehemently opposed the bill, citing the myriad of difficulties presented to victims after sexual assault occurs. Choosing to report is often an extremely traumatic and difficult decision, one that would only be complicated by mandatory police reporting.

In an article published by The Guardian, staff from England’s Durham University explained one training exercise conducted to help counselors assist victims of sexual assault. The article states, “For every concern: ‘Will they believe me if I’ve been drinking?,’ ‘Will the forensic medical examination hurt?,’ ‘Will my parents find out?’ we place a chair in the middle of the room and line them up in a row. By the end of the exercise, participants generally move from wondering why victims don’t report to wondering how anyone does at all.”

The exercise illustrates the invasive and painful reality many victims face when deciding whether to report their assault and helps people understand the consequences these individuals face during the aftermath.

The Bureau of Justice Statistics reported that 80 percent of surveyed college student rape victims did not report to the police. As it stands, only two out of every 100 sexual assault reports lead to felony conviction and arrest. There are currently at least 100,000 backlogged rape kits in the U.S. today. These numbers do nothing to inspire confidence that the Safe Campus Act would contribute anything positive to campus rape prevention. By requiring police reporting and forcing rape victims to shoulder the burden of proof that the assault occurred, the Safe Campus Act would only perpetuate the culture of shame, silence and fear surrounding rape and assault.

The rhetoric and culture surrounding rape and sexual assault revolves around an omnipresent theme: Those who say they’ve been raped are lying and the responsibility is placed on the victim to either prevent it or prove it happened. If victims of rape and assault are even able to come forward about it, they are barraged with questions, skepticism and even ludicrous products. While the intention behind things like tracking apps, rape-proof underwear and nail polish that detects date-rape drugs is commendable, they simply add to the laundry list of things victims should have or do to prevent rape and assault.

Lady Gaga’s new single, “Til It Happens to You” is an emotionally jarring depiction of the pervasive sexual violence on campuses, the title insinuating that victims have no other choice but to wait for that violence to affect them. It’s not a question of if sexual assault will happen to you or someone you know, but rather when. An estimated one in five women and seven percent of men experience sexual assault or rape during college. Look around your classrooms, your dormitories, your circles of friends. One of those individuals has experienced sexual trauma and is more than likely suffering silently.

There are several confidential resources available to students on campus that exist for individuals dealing with traumatic events. They can help guide students in how to proceed afterward. If you or someone you know has experienced rape or sexual assault, reach out:

Kaley LaQuea is a master's student in the Media and Public Engagement Department. She covers national issues related to intersectional feminism and race.