Jared to the Left: Make this Labor Day count 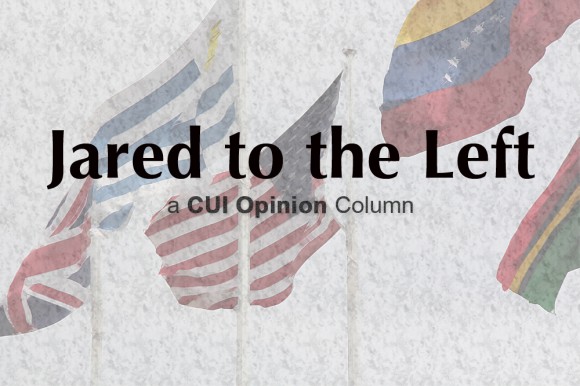 Labor Day is going to get a little more interesting this year, and for us college kids, the holiday could mean more than checking to see if Chipotle’s operating hours are different. It could be the perfect day to get involved with a workers’ movement that’s getting rowdier and making progress. The Guardian reported that over 60,000 workers walked out of their jobs last week in a protest called the Fight for $15 — demanding a minimum wage that’s more than twice the current one here in the U.S.

We could gawk at how high $15 an hour sounds and call it “an absurdity,” like at least one cranky-looking Forbes writer did, or we could realize that anyone reading Forbes on a daily basis doesn’t have much in common with us. Right now, and only more so when we graduate, we’ll have to realize that we desperately need the Labor movement. Those thousands of low-wage workers taking to the streets aren’t an alien species. They’re protesting for our futures as well as theirs.

Low-wage workers are leading the push for income equality. But why them? True, the people with the least money are usually the ones who actually try to solve the world’s biggest problems. Take climate change. Aboriginal groups are filing lawsuits to stop the Keystone XL pipeline, and one of the poorest countries in Latin America put the rights of Mother Earth into its law books a few years ago.

While that’s happening, energy companies like Total and ConocoPhillips are putting their cash into something they call “oil and gas exploration” — the fancy term for finding new outposts for wrecking the planet. Poor people get hit the worst by any big problem like climate change, and they’re the first ones to do anything about it. We need to get on the same page as the protesters.

It’s easy to see why the guy who’s wrapping your burrito (maybe his 100th one of the day) might want some kind of improvement to his job. The white-collar worker is having a bad time, too, but he’s on the eighth floor of an office building behind windows that look like mirrors from the outside. Companies are shaping up to be money-making machines for the select few (and 86 percent white) people at the top, but a nightmare for everyone else. Even people who haven’t started their careers are getting a taste of it.

The almighty employer takes the form of the potential employer to terrify college students. The trained eye can see fear in the deleted Facebook pictures, the haggled G.P.A.s, the phrase “sell yourself” becoming actual advice to résumé writers. Everyone knows that “nothing is private” anymore, but no one seems to think it’s weird that companies are spying on us. For what it’s worth, drunk pictures on Facebook aren’t all we have to censor. In a 2010 report, the F.C.C. raved about the fact that a single company can know our eating habits, who we e-mail and what we e-mail them about, and something creepy called “movements,”  all from our internet connections.

Maybe we know for a fact that we haven’t gone to Taco Bell too much for a potential employer’s liking, but we can’t control our genetic makeup. Apparently the new frontier in management is studying job prospects’ genes to see how moody or trustful they’ll be at work, according to The Economist’s cheery article about it. This all happens before we start the actual job. Keeping that job depends on whether or not the boss is having a good day, or whether an accountant finds out that the company could survive with one less “team member.”

We plan on working at these places for decades, though. We should all realize that employers are just going to find new ways to turn us into efficient employees until we fight back. Politics is a good start, as the establishment candidates always make sure to throw a bone toward the Labor movement in their own weird ways. Hillary Clinton apparently needed 200 policy advisors to find out how to talk about income inequality during her presidential campaign — not a great sign for the Labor movement, but at least she’s addressing a workers’ issue. Making politicians prove that they’re on our side will take serious effort. Luckily for the white-collar people who might join the struggle, low-wage workers are already on it. It’s time to do our part.

No charges filed one year after PIKE protest, with...