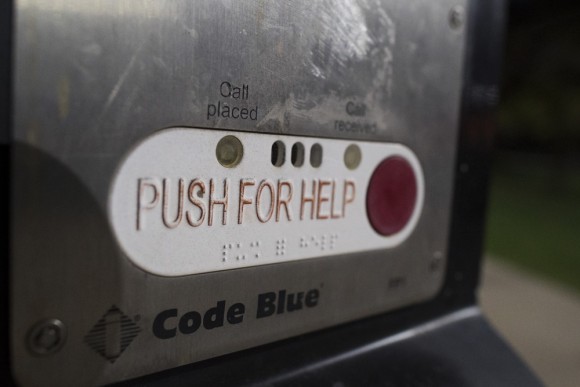 The blue light system throughout the University of Colorado was a symbol for campus security for direct contact to the CU police department during its installment on campus. (Alexander Joyce/CU Independent)

CU Helpline volunteers appealed to the CUSG Legislative Council for support Thursday after they said the helpline was decommissioned by Psychological Health & Psychiatry (PHP) eight months ago.

Sophomore Austin Rugh and alumnus Carly Loehr, directors for CU Helpline, collected signatures from much of the council in an effort to have the service reestablished.

The directors said that PHP didn’t consult or notify them prior to removing their support.

“I was really disheartened to hear the way in which the shut-down was handled,” Jenn Calvano, a graduate student and co-senator, said.

Tomorrow, Rugh and Loehr will meet with Associate Vice Chancellor for Health and Wellness Donald Misch, hoping for an explanation.

“I think the biggest thing that we can hope for is answers. We still don’t know the real reasons why we were let go.” Loehr said.

The group, whose petition has received over 400 signatures, is now seeking sponsorship from other departments on campus.

“It’s going to come back one day,” Loehr said. “It’s just a matter of where and how.”