After junior forward Jamee Swan poured in 15 first half points, senior guard Lexy Kresl picked up where Swan left off in the second half and scored 17. Despite Swan and Kresl’s individual single-half heroics, the Buffaloes couldn’t overcome a Washington team whose three conference losses this season have all come to ranked teams.

With 20 seconds left in the game and Colorado trailing Washington 83-79, Swan drilled her third 3-point attempt of the season to bring the Buffaloes within one point. But that was the closest CU would come, as a failed 3-pointer from senior guard Jasmine Sborov at the end of regulation was far off the mark.

Swan finished the game with 22 points and 11 rebounds, while Kresl led the team with 23 points.

Colorado dominated the majority of the first half, leading by 11 and heading into the break leading Washington 42-35. Behind Swan’s 15 points and seven rebounds in the first half, the Buffs barraged the Huskies from the paint and from 3-point range, where senior guard Lexy Kresl, sophomore forward/guard Lauren Huggins and senior forward Jen Reese combined to go four-for-eight. Washington relied heavily on 3-pointers to stay in the game in the first half, making seven 3-pointers on 19 attempts. The Huskies would continue to shoot the 3-pointer with reckless abandon throughout the game, and finished with more than half of their attempts coming from 3-point range (34-of-64). 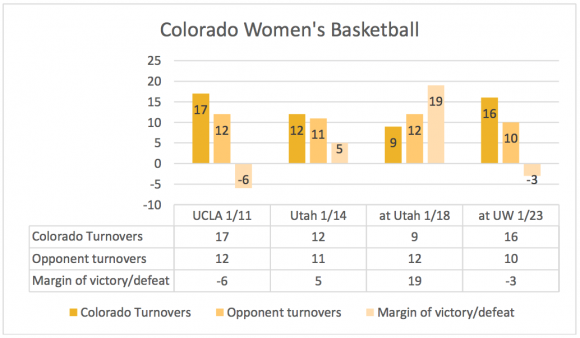 A 15-4 run put Washington back in the lead within the first five minutes of the second half. Colorado was able to jump out to another ten-point lead behind Kresl’s dominant second half performance, only to see Washington once again retake the lead.

After reducing their turnovers in their last three games, Colorado coughed the ball up 16 times Friday night. This has been the most for CU since they had 17 in a January 11 loss at home to UCLA. The turnovers for both the Buffaloes and their opponents have proved significant in the final margin of victory as of late for Colorado, who have kept their turnovers in the single-digits for the first time all season in a win at Utah last Sunday which was won by 19.

Colorado is now 9-9 on the season, and 2-4 in conference play. The Buffaloes moved to 6-2 on the season when leading at halftime after Friday night’s loss.

The Buffaloes continue their Pacific Northwest road trip when they head to Pullman, Wash. this Sunday, January 25, to take on the Washington State Cougars, tipoff at 2 p.m.