“I’d rather die drunk, broke at 34 and have people at a dinner table talk about me than live to be rich and sober at 90 and nobody remembers who I was.” 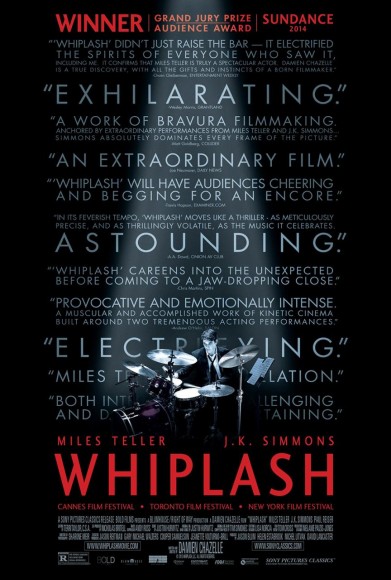 This brutal character study glues viewers to the screen for the full hour and 47 minutes, refusing to loosen its grip until the final cymbal chimes.

Niching itself in the vein of films like Darren Aronofsky’s “Black Swan,” “Whiplash” holds to its main theme of doing whatever it takes to achieve greatness and perfection — but don’t let that make you think Chazelle has created a one-note film with oversaturated motifs. The multi-textured storyline creates a moral battle within each individual audience member, managing to incite a feeling of pride and triumph by the end despite the audience’s knowledge that Andrew’s success is only the result of the most vicious abuse. This crafty technique leaves the viewer in a state of confusion and unrest long after the final credits have rolled. He’s not condoning Fletcher’s despicable methods, but Chazelle is presenting a more complex conclusion than filmgoers can immediately relate to.

Along with the refreshingly layered storyline, the technical achievements exhibited by the crew are just as astonishing. Music plays such an important role in this picture that it could be argued it’s another leading character. Through the use of consistent intercutting and dramatic shot-reverse-shots, cinematographer Sharone Meir gives the film’s sound a tangible, visible image. Even though having the ability to see music come to life is remarkably beautiful, the lack of sound can be just as important. The masterful use of silence often boosts the scene to the level of intensity it needs while showcasing the dramatic difference silence can make. Between the rapid-fire cinematography and rhythmic sound mixing, a stylistic harmony is created, giving “Whiplash” a nonstop forward motion that parallels the pounding drumming itself.

And let’s not forget about the two leading men and their monumental performances. Lately Miles Teller has seen a lot of action and shown some decent talent, most notably in last year’s “The Spectacular Now.” But Teller makes leaps and bounds with “Whiplash,” showing the skill-level of a well-seasoned Oscar winner rather than an up-and-comer. J.K. Simmons has been a player in Hollywood for years, but has never taken on a role quite like this. His chilling, manipulative portrayal of Fletcher elevates Simmons to a dramatic heavy-hitter.

The eeriest element of “Whiplash” is the underlying theme of perfection. Every driven person in this world has considered how far they would go to be the best at what they love, and this film makes you ask yourself if going to the brink of insanity and literally shedding blood is worth it in the end. Or, if Andrew would have had the same successful fate if Fletcher had not emotionally and physically abused him. But that’s the beauty of cinematic art — there’s never just one answer or ending.

Xandra McMahon is currently a senior at CU Boulder and has worked for the CU Independent for over three years. She created and hosted multiple CUI podcasts. She has also had the opportunity to interview stars like Amy Schumer, Hannibal Buress and the Grammy-nominated rock band Wolf Alice.