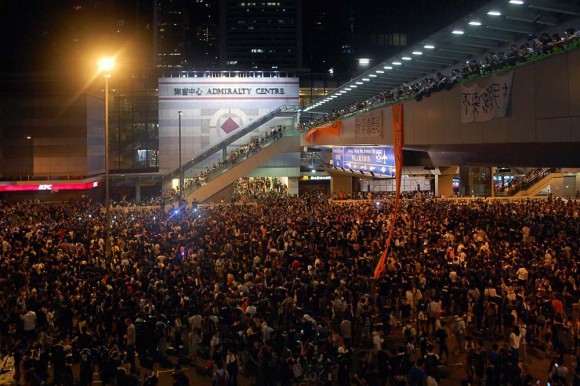 Protesters occupy Harcourt Road in front of the Admiralty Centre and the Central Government Offices at Tamar in Hong Kong on Sept. 29, 2014. (Photo Courtesy of Citobun/Wikimedia Commons)

On Sept. 22, protests sparked in Hong Kong following China’s announcement at the end of August that voting reforms would be implemented in Hong Kong’s 2017 elections. At the forefront of this movement to protect Hong Kong’s sovereignty: university students.

The reforms restricted the vote for the region’s next leader to a small group of candidates authorized by China. The restrictions threatened the notion of “one country, two systems,” which describes the relationship between Hong Kong and China since London handed over the territory in 1997; Hong Kong, though a part of China, has its own legal system.

After a week of protests, student leaders decided to defer talks with government officials about democratic reforms after demonstrators were assaulted on Oct. 3. Members of protest groups accused authorities of failing to protect demonstrators.

The protests are led by several organizations, with Occupy Central at the helm, although other student and pro-democracy groups have joined the drive for free and direct elections since the protesting began. On Sept. 23, 1,000 students planned a weeklong boycott of classes as part of their march to government offices in Hong Kong’s financial and business district. The day before, 13,000 students gathered in rallies at Hong Kong University’s campus, marking the official start of the protests.

“It is fairly empowering to see students at the forefront of a movement demonstrating their agency as human beings,” said Casey VanSise, a 20-year-old junior international affairs and history major at CU.

On Oct. 2, Hong Kong’s chief executive Leung Chun-ying refused to step down from office following a request for resignation issued by student protestors the day before. He proposed having his delegate meet students to discuss their demands for democratic reform. Student leaders agreed to Leung’s proposal under the condition that the conversations would be conducted in public.

Jackson Burke, 18, a freshman international affairs major, said he was not surprised by the demonstrations.

“Hong Kong has felt too controlled by Beijing for many years, and the election restrictions that were instituted just made it convenient and easier for the protesters to organize and put up a legitimate fight,” Burke said.

The protests first escalated on Sept. 26, when police used pepper spray to push back student protestors, the group having ballooned to over 10,000 people. The police arrested a few of the demonstrators, including the 17-year-old student protest leader Joshua Wong.

“You have to see every battle as possibly the final battle — only then will you have the determination to fight,”’ Wong said to CNN following his release on Sunday.

The weekend saw the number of protestors grow, forcing the police to use tear gas for first time in years.

On Sept. 30, thousands of demonstrators gathered around government headquarters in Hong Kong. It was the day before China’s National Day on Oct. 1, which marked the 65th anniversary of the Republic of China and the 18th anniversary of Hong Kong’s transfer of sovereignty from the British. The demonstrators were asked to leave the district, but refused to do so. The crowd demanded that Chung-ying resign from office and threatened to adopt stronger measures, such as occupying government offices.

The threats continued on into National Day, when student leaders again said that they would occupy offices if Chun-ying did not step down.

“Hong Kong’s chief executive and his advisers have decided, with support from China’s leaders, that their best strategy is to wait and hope that the disruption of everyday life will turn local public opinion against the demonstrators,” reporter Keith Bradsher said in a New York Times article published on Oct. 1.

The talks agreed to by protesters on Oct. 3 may predict the future course of the demonstrations. The Hong Kong protest leaders have since agreed to two rounds of talks with the city’s government. The first will be held at 4 p.m. local time on Oct. 10 and will focus on issues of constitutional reform, while the second talk will address legal requirements.

Burke said he does not think the protestors will gain the reform they are fighting for.

“The gains for the protesters…always end up being minuscule at best,” he said.

Andrew Hart, a 33-year-old PhD candidate in political science, disagreed, saying that the actions taken by the government might lead to an expansion of the protests.

“If things do not resolve or the protests escalate…bullets may very well fly, especially if it looks like protests may spread to other Chinese cities,” Hart said.