Opinion: Grindr and hook-up culture in the gay community 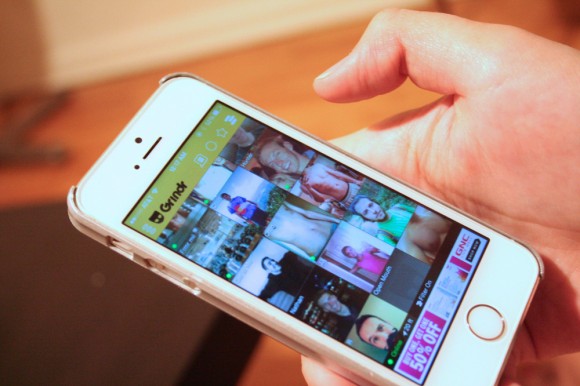 Scrolling through the Grinder homepage shows other users nearby. (Alexandra Greenwood/CU Independent)

Opinions herein do not necessarily reflect CUIndependent.com or any of its sponsors.

Today, my fabulous reader, we are starting with the overused subject of relationships: two hormonally passionate adults who want each other dearly, perhaps direly, beyond the realm of sense. But let’s take that subject and place it in this context — a relationship between two men.

The difference in gay relationships is the fear and discrimination still faced today in being out. And with fear there comes the tendency to hide and not allow yourself into a strong, honest relationship because of the fear that your peers will know you are dating Mr. Six-foot-five, tall, dark and manly. According to Melissa Ritter, author of The Pride in Grindr Sex, “Homosexuality is shadowed by furtiveness and fear. By necessity, most gay men have to hide their desire for romance and sex. Without the possibility of open courtship and/or marriage there isn’t any sanctioned possibility for satisfying this fundamental human need.”

Hook-up culture is the result of this hiding away from your peers — Grindr, Scruff, Tinder, Jack’d, Growlr and similar apps. The technology itself isn’t the problem, but rather the misuse thereof: using the apps for meaningless hook-ups, both for open and closeted homosexual males. This leads to a cultural and personal superficiality, in which potential relationships are judged only by a photo on a profile, and lean toward being “hook-ups,” no matter what you’re looking for in reality.

These hook-up apps facilitate no-strings-attached sex. On Grindr, pictures of a person are first to come up, personal details later. The effect on the gay community as a whole is that men just have to assume everyone wants to hook up; it’s rare to merely “court” or be friends.

In a small experiment I performed, I created two Grindr profiles: one with a shirtless male, and one with the same guy, but showing only his face. I left the app open with the two profiles on two different devices for two days, and the results were as expected. More messages were sent to the profile with the shirtless photo than to the face-only profile– 20 messages to just two. The result follows the idea that men on these apps are looking primarily for a sexual encounter.

The fact is that gay males are a bit, well, sexually driven. In a study of 30,000 men, the average amount of sexual partners among gay men was 10 partners every six months. This pattern contributes to making the gay community more sexually promiscuous and detached. Now, I am not slut-shaming — au contraire, I find it fantastic that people can be sexually open! Physical intimacy is the display of your naked self to someone, and given to the right people, includes feelings of connectedness and affection. But promiscuity with no connectedness, no affection, is where a hook-up-based relationship becomes a problem — because no matter what, you are making a bond with your one night stand.There is an increase in the chemical oxytocin in our brains when we have sex. Oxytocin makes the emotional bond between two people stronger, rightfully earning the nickname “the love molecule“.

Personally, you might have felt some sort of emotional dissonance after a one night stand or breakup — I know I have, a myriad fold. That is most likely from your limbic system responding to the inundation of chemicals (oxytocin, dopamine, etc.) from the rush of your hook-up still lingering in your brain, thus causing an emotional disconnect between the negative feelings of being left and the positive feelings from the night before. This reaction triggers negative thoughts and the general feeling of being alone.

A personal experience is my one night stand on Grindr. When the guy left and blocked me on the app, I felt dirty, ugly and absolutely alone. I didn’t even know who he was, and yet there I was, feeling my heart cut. The stress before and after the fallout has only left me scarred in the long run. This kind of pain can be avoided by promoting a gay culture that is open and honest, rather than one in which men assume that relationships have to be secretive, sexual hook-ups.

This app-assisted promiscuity is like an emotional cutting system for gay males: you know it’s bad for your physical and mental health, and yet you continue to let the blade slice. You don’t have to cover up the pain, nor who you are as a human. You can use these apps, but do so in a way that leads to more than a hook-up — something that will benefit you in the long term, not just the short term. We’re 14 years into the 21st century; why do we need to hide anymore? People shouldn’t be scared of being themselves. We should stop being superficial and look beyond the pictures and the physical. That is true love for same sex relationships. Openness will not only make you feel free, but your relationships will also become deeper in that you won’t have to hide your feelings — just express them.