Buffs head to Seattle for final road game against No. 15 Huskies 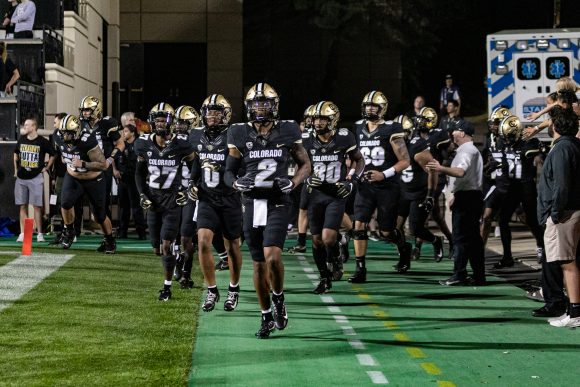 Players for the University of Colorado Boulder’s football team run back onto the field after half-time during the game against TCU on Friday, Sept. 2, 2022. (Io Hartman/CU Independent)

After their 55-17 loss to USC on Saturday night, the 1-9 Colorado Buffaloes travel to Seattle to face the #15 ranked 8-2 University of Washington Huskies. With their last four games of the season coming against top 25 teams, CU has struggled to match up against the top talent in the Pac-12.

With CU being up 3-2 after 15 minutes, USC stepped up and scored 52 points in the subsequent three quarters. Though the defense played well in the first quarter, they were no match for Heisman candidate Caleb Williams and the top-ten Trojan offense. With CU’s 259 total yards of offense, compared to 531 by USC, the Buffs struggled to find any momentum at the Los Angeles Memorial Stadium.

“I thought it was a good start, particularly on the defense,” said head coach Mike Sanford. “I was really pleased with how we prepared. We came out and gave some different looks.”

Shifting to this week, in a game that may not have been circled on the Buff’s schedule, the Washington Huskies are now looking to force their way into the Pac-12 championship game. In what was their biggest win of the season, the Huskies beat the Oregon Ducks 37-34, knocking the Ducks out of playoff contention. As a team that has quickly shot up the rankings, CU should prepare for anything in Seattle this weekend.

“Today, this might be the best team in the conference,” Sanford said. “After the Oregon game, just seeing the roster, seeing the top-to-bottom nature of who they are as a program … they’re as good as any team right now and maybe in the top five, top 10 of college football because you’re only as good as your last game.”

In good news for the Buffs, Sanford announced in his Tuesday press conference that junior tailback Deion Smith will return to play this week. In his seven games with the Buffs this season, Smith ran for almost 400 yards and scored two touchdowns. Sanford also announced the return of sophomore safety Trevor Woods, who has recorded 68 total tackles in eight games this year.

While Smith was out, senior Alex Fontenot led the CU rushing attack. In the loss to USC, Fontenot carried the ball 20 times for 108 yards, finding the end zone once. With Smith coming back, along with help from freshman Anthony Hankerson, the Buffs will look to continue to use the rushing game as a key piece to their offense.

Though it was already known, Colorado’s star freshman receiver Jordyn Tyson is out for the season after suffering a leg injury in the loss to Oregon last weekend. It was announced that Tyson had successful surgery on Tuesday, as he contemplates entering the transfer portal or staying in Boulder. Regardless, the injury was just another bad break for the CU offense, one that has struggled all season.

As a team that gives up an average of 41 points per game, the CU defense looks to use their experience playing top-level offenses as preparation for the game against Washington. The Huskies quarterback, Michael Penix Jr., leads the country in total yards and is in the top ten in the country for passing touchdowns. After reflecting on games against Bo Nix (Oregon) and Caleb Williams (USC), sophomore cornerback Nikko Reed believes the CU defense can still find opportunities for success.

“I feel like if you’re where you are supposed to be by doing your job, it’s just all going to pay off,” said Reed. “No matter how good someone is, as long as you do your job and use your technique, you can do good enough for yourself.”

Coach Sanford wanted to let the team know that the game this weekend might be their toughest yet, but as he has been since being promoted to interim head coach, he led with positivity and enthusiasm.

“This is a really, really good football team,” said Sanford. “All you can evaluate them on is what they’ve done recently and what they just did. They were playing against a team with legitimate national championship aspirations and they beat them, and it wasn’t fluky…It’s a monumental task for our football team to go in there, and we’re excited for that task.”

This weekend, Colorado goes to Seattle for their last road game of the season against the No. 15 ranked 8-2 Washington Huskies. The game will be at Husky Stadium at 7 p.m. on Saturday, November 19, on the Pac-12 Network.