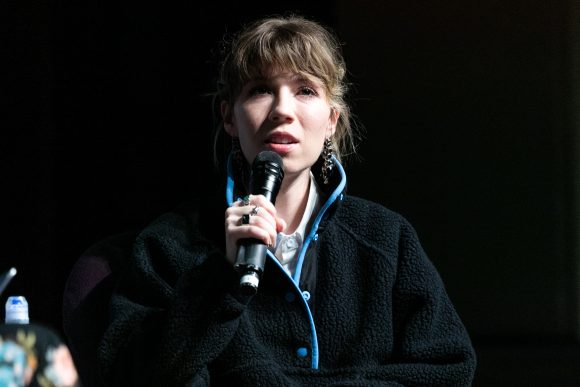 On Nov. 7, the Distinguished Speakers Board at CU Boulder hosted an event with Jennette McCurdy, the former child star from the hit Nickelodeon television show “iCarly.” During the conversation, McCurdy discussed her mental health and therapy journey, as well as her memoir “I’m Glad My Mom Died,” published in August of 2022. The conversation was moderated by DSB Chair Veena Bhatnagar and DSB Director of Operations Vivian Luckiw.

McCurdy’s memoir “I’m Glad My Mom Died,” which has received critical acclaim, tells a heartbreaking yet stoically funny account of the abuse and exploitation she suffered throughout her beloved career as a child actress. The audiobook, narrated by McCurdy, has a 4.9-star rating on Audible from nearly 70,000 reviewers. 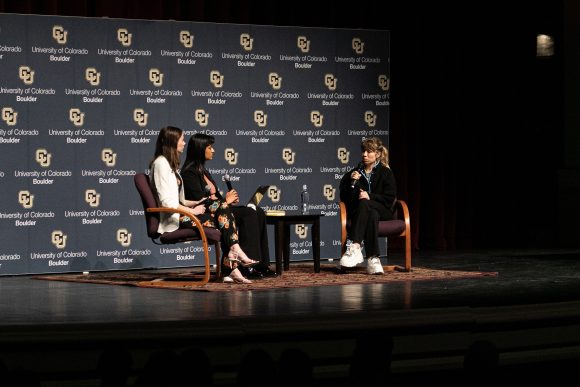 At the age of eight, McCurdy first appeared on live TV with “Mad TV,” a sketch comedy show on Fox in 2000. Over the next seven years, she appeared in dozens of other shows and movies, such as “Malcolm in the Middle,” “Law and Order” and “CSI.” Then came her big debut. In 2007, “iCarly” premiered on Nickelodeon, starring Miranda Cosgrove as Carly Shay, a quirky high-school teen, and McCurdy as Sam Puckett, Carly’s brash yet lovable best friend. The sitcom became extremely popular, receiving several Emmy nominations and Kids’ Choice Awards wins. McCurdy later reprised the role in “Sam & Cat” in 2013, alongside singer Ariana Grande in a spinoff-crossover with the Nickelodeon show “Victorious.”

Last year, Paramount aired the first season of a reboot of “iCarly,” starring McCurdy’s co-star Miranda Cosgrove and most of the original cast; however, McCurdy was noticeably absent. She chose not to return to the show — in part due to her traumatic childhood memories from her time on Nickelodeon. 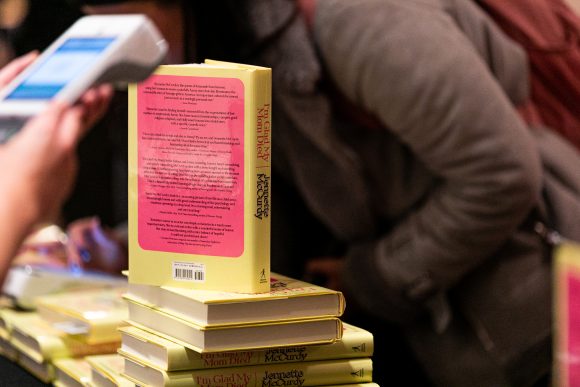 The Boulder Bookstore sold copies of McCurdy’s best-selling book “I’m Glad My Mom Died” at a booth in front of the inner set of Mackey Auditorium doors on Monday, Oct. 7, 2022. (Io Hartman/CU Independent)

Throughout the six-season run of the original “iCarly,” McCurdy faced emotional abuse from her mother. As a child, McCurdy didn’t even like acting or performing. Her mother forced her into the career for financial gain. As McCurdy became more successful, her work became the sole source of income for her entire family, which included four brothers, parents and grandparents.  The stress from this experience significantly impacted McCurdy’s mental health. Growing up, she suffered from numerous mental illnesses, including eating disorders, obsessive-compulsive disorder, anxiety and depression.

The trauma of this experience took six years of therapy for her to explore and disentangle, a process that culminated in the publication of her memoir. McCurdy found the writing process to be a very effective form of healing, enabling her to reflect deeply in isolation. 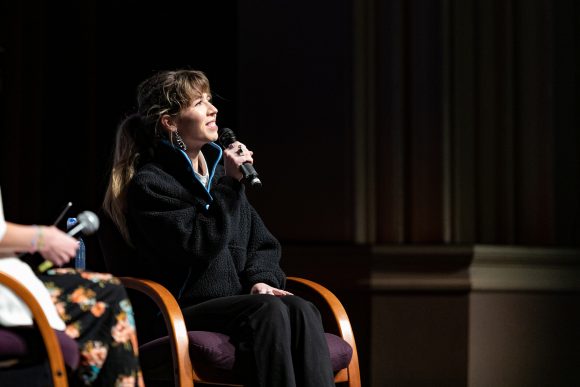 Yet, despite the heavy subject material, McCurdy takes a comedic approach to exploring her trauma. The memoir’s tone is deadpan and matter-of-fact, guiding the reader through traumatic memories without being too depressing or exhausting.

“I don’t think anything in life is all dramatic or all comedic,” McCurdy said. “Oftentimes, life is so funny and sad at the same time in the same room in the same moment. I really wanted to capture that in writing. Humor helps.”

Through this humorous take on darker themes, McCurdy was able to connect with a large audience of fans with her memoir.

“I didn’t expect [the book] to be as big as it has become,” McCurdy said. “It’s been really exciting to see how much it’s connected to people and how deeply it’s connected with them. It’s also unfortunate because I think it’s a testament to how much trauma people have experienced.”

As McCurdy reflects on her childhood acting experience, she has come to the conclusion that child acting should be outlawed. Though this will likely not happen, she has ideas about ways to advocate for vulnerable child actors that she believes will improve the current situation.

McCurdy believes there is a lack of support for child actors on movie and television sets in Hollywood. In California, one of 33 states with designated laws for child actors, most of the laws govern what can be done with the child’s income, not their working hours or on-set experience. Though child actors can turn to the Screen Actors’ Guild, an American labor union that represents over 160,000 film and television actors and radio artists, they must pay an entrance fee of $3,000 and make yearly payments going forward. For children who are members of the guild, no programs exist to supervise their rights and working conditions, as this responsibility typically falls to parents or guardians. 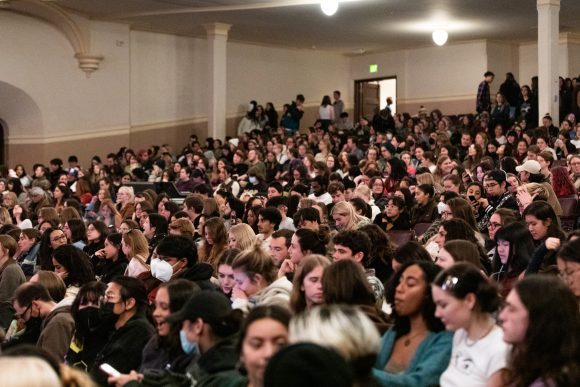 “I think if there was somebody on the [Screen Actors’ Guild Kids’ Team] who was solely for their well being, that would be huge,” McCurdy said. “That’s not a thing that exists. Somebody to be like, ‘Yeah, that’s not okay. They can’t work 16 hours. You can’t take all the kid’s money. This is not fair.’”

In 2017, McCurdy decided to take a career pivot from acting to writing and directing. At the time, she had been starring in the Netflix show “Between,” which was not renewed for a second season. This break lead her to reflect on how she had never been given the opportunity to act in films or shows she felt a personal connection with.

In 2018, she wrote and directed several short, semi-autobiographical films, including “The McCurdys,” “Kenny” and “Strong Independent Women.” Much like her memoir, the films explored themes of mental health, eating disorders and family abuse. In 2021, McCurdy also wrote and produced a one-woman show titled “I’m Glad My Mom Died.” She says she found these projects to more creatively fulfilling, despite the darker themes and dysfunctional characters she wrote about.

“I don’t even know how to write [characters] not dysfunctional or not have some sort of addiction or not quirky in some way,” she said. 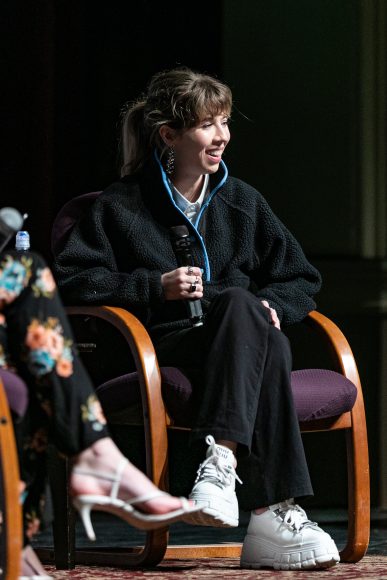 As she shared her story at Macky Auditorium, McCurdy found that many of her experiences resonated with CU students in the audience. Many of these students fell in love with McCurdy during her days on Nickelodeon. In a way, they grew up alongside her.

“I grew up watching [McCurdy] on TV,” said Emma Parelman, a junior at CU Boulder. “It meant a lot to me to go and watch her speak.”

“I think she brings relatability, while also like being so wise and vulnerable,” said Caroline Cappaletti, the public relations chair for DSB. “I’m excited that we brought her in [to show the personal struggles faced] by actresses in the entertainment industry.”

At the end of the event, McCurdy hosted a brief Q&A. This session offered students a chance to speak openly about their mental health struggles and to ask her for advice, which several students described as an inspiring and uplifting experience.

“It’s really impactful to hear somebody talk about struggles that everybody goes through,” Parelman said. “It makes me feel not alone to hear that even big famous people who are in the public eye, they experience hardship too.” 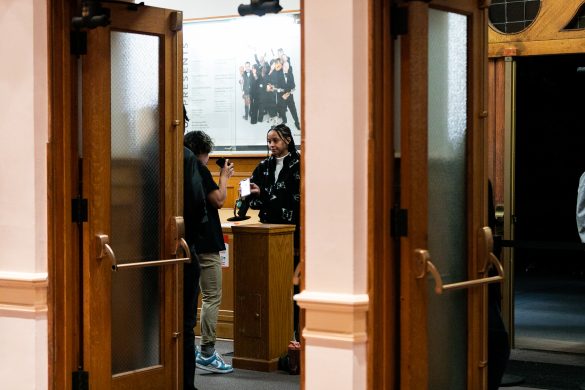 Students scanned their tickets at the front doors of Mackey Auditorium for "A Conversation with Jennette McCurdy" on Monday, Nov. 7, 2022. (Io Hartman/CU Independent) 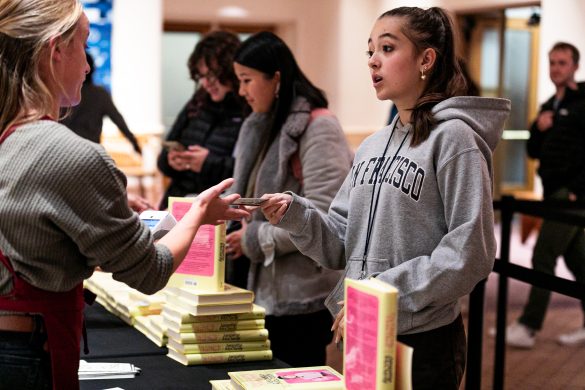 The Boulder Bookstore sold copies of McCurdy's best-selling book "I'm Glad My Mom Died" at a booth in front of the inner set of Mackey Auditorium doors on Monday, Oct. 7, 2022. (Io Hartman/CU Independent) 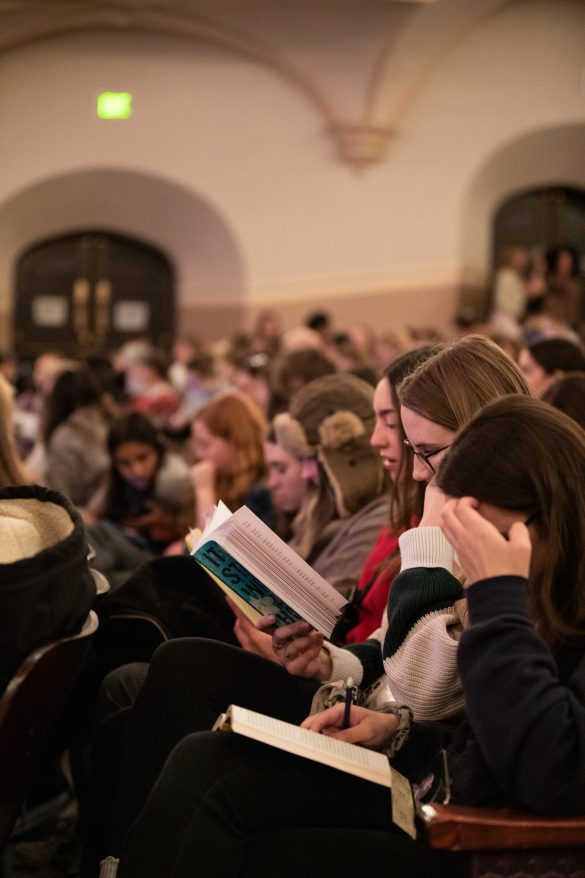 Before the start of the event, students in the audience read books, both McCurdy's and others, as they waited. Monday, Nov. 7, 2022, in CU Boulder's Mackey Auditorium. (Io Hartman/CU Independent)