Buffs look to bounce back at Folsom Field against ASU 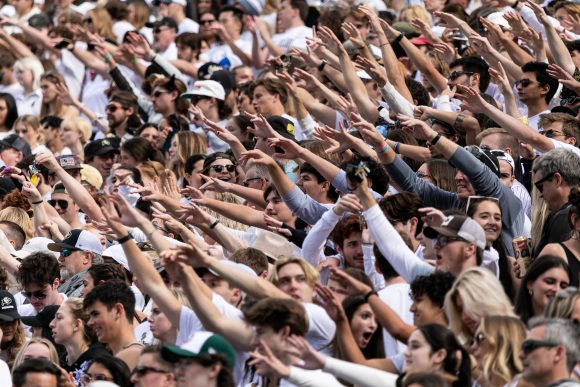 Students raise their hands in preparation for a kickoff from the stands at Folsom Field for the game against California State on Saturday, Oct. 15, 2022. (Io Hartman/CU Independent)

After their 42-9 loss against Oregon State over the weekend, the Buffaloes are looking to bounce back against Arizona State during homecoming weekend this Saturday, Oct.29. The loss over the weekend was interim head coach Mike Sanford’s first with the team.

In their loss in Oregon over the weekend, the Buffaloes could only get into the endzone once, thanks to sophomore running back Jayle Stacks, who also led the team in rushing yards.

“It’s kind of like practice, but those dudes on the other side are trying to bang you up and get you out of the game, but it was a great opportunity,” said Stacks. “If you look at our running back room and the depth that we have, some guy gets banged up. I think there’s always someone that’s going to step up and do what he needs to do.”

When talking about his other running backs, Deion Smith and Alex Fontenot, Sanford said they could be available for the weekend game, which would be a massive boost for the offense and running game.

Sophomore J.T. Shrout started at quarterback for Colorado but could not find his receivers in the endzone as he finished 13/29 with 206 yards and two interceptions. However, despite a couple of turnovers, Shrout is in line for another start, with freshman Owen McCown nursing an injury. McCown got injured in the Cal game before Shrout took over, and based on practice this week, it seems the injury is still bothering the young signal caller.

“Owen got very limited reps today. I want to be very transparent with that,” said Sanford. “It’s a throwing-based injury, but it’s kind of in the midsection, so it’s not a shoulder or elbow, nothing along those lines. He is not there yet, to be honest.”

Defensively, CU gave up 42 points, a little higher than their season average of 39.2 points. Struggles the whole year have come from being unable to stop offensive drives consistently and get off the field on third downs. Against OSU, the Buffs gave up 26 first downs on 7.2 yards per play. The defensive unit has had its fair share of troubles, but Sanford doesn’t see that plan changing.

“I think defensively you’re seeing almost the same consistency you’ve seen all year with regards to what they do schematically on defense,” said Sanford. “I don’t see that really changing.”

Senior outside linebacker Guy Thomas, one of the leaders on the defensive side of the ball, also commented on his unit’s sub-par performance so far this season.

“It was definitely tough watching the film,” said Thomas. “We feel like we could have played better. But I guess we put Oregon State behind us, and we go onto Arizona State.”

With a game back at Folsom Field, Colorado looks to recapture the energy and excitement in their sole win, a 20-13 overtime thriller against the California Golden Bears. The defense was a big part of that game and will be key again on Saturday.

“We look forward to doing everything in our power to recreate what I got to experience firsthand with Folsom Magic,” said Sanford. “That’s a real thing, I felt it. It was unlike any other fanbase I’ve personally been a part of, particularly in a time of adversity.”

With the Arizona State Sun Devils currently holding a 2-5 record, Colorado, as 13.5-point underdogs, is looking for another upset at home. With the feeling of winning in Boulder in his back pocket, Sanford looks to repeat that against the Sun Devils this weekend.

“We’re gonna go and compete and bring unbelievable energy and bring the execution to match that energy to create another great memory,” said Sanford. “That’s the intent for this Saturday.”

The University of Colorado Buffaloes squares up against the Arizona State Sun Devils this weekend. The game will be at Folsom Field on Saturday, Oct. 29, at 5:30 p.m. MST and televised on the Pac-12 Network.