Boulder to decide the future of electric scooter pilot program 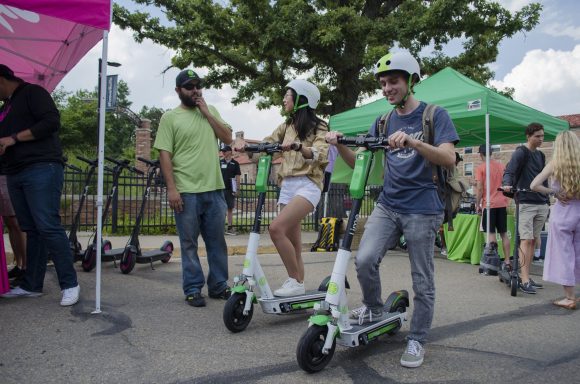 Have you seen or ridden an electric scooter on the east side of Boulder this past year? If you have, it’s thanks to a pilot program started by the city in August of 2021. Now, with the data collection phase wrapping up, officials at the city’s transportation and mobility department are deciding whether or not to expand the program citywide. They will release their recommendation at the end of October.

The pilot program introduced 200 electric scooters to Boulder’s roadways for the first time in the city’s history, though only in a limited area to the east of 28th Street. For a year, the city of Boulder has been running the program to test the effectiveness of new initiatives on micromobility, meaning personal transportation, such as e-bikes or scooters, that allows for faster travel without cars.

Though no official data has been released about the results of the program so far, Boulder will likely follow the trend of many other midsized cities across the U.S. adopting similar micromobility initiatives. In Colorado, several cities already implemented ridesharing programs in 2021, including Fort Collins with Spin and Colorado Springs with Lime.

Though some critics claim that e-scooters add clutter to the city’s roads and paths, proponents believe that the vehicles are a relatively inexpensive, convenient and eco-friendly way to travel without a car.

“Lately, there has been a real strong push nationwide to add [electric mobility vehicles] because these types of vehicles make it a little easier for people to get around,” said David Kemp, the city of Boulder transportation and mobility department’s senior transportation planner, who leads Boulder’s electric scooter pilot program.

For this pilot program, officials partnered with Lime, the world’s largest shared electric vehicle company for e-scooters and e-bikes that operates in over 200 cities across the world. Using the company’s app, customers can activate scooters scattered across a designated area for immediate use.

In addition, the city worked with B-Cycle, a ridesharing partner for the city since 2010. B-Cycle, a bicycle sharing business that manages short-term, public bike rental stations citywide, has recently expanded its fleet to include electric bicycles.

Community partnerships for the pilot program

The city partnered with the University of Colorado Boulder and half a dozen other community groups, including Boulder County, the Chamber of Commerce and Boulder Housing Partners, to solicit a proposal that fit the pilot project’s needs in 2021. They ultimately selected Lime for the one-year pilot study project.

“Each entity has its own needs, and then you work to include those needs into the overall scope of work,” Kemp said. “We worked with CU Boulder on safety being paramount. We also worked [with the university] on availability, accessibility and equity.”

Right now, Boulder’s electric scooters have several limitations to make them safer and limit their use to designated areas. The scooters are “geo-gated,” meaning they are electronically prevented from going west of 28th Street. Currently, Lime scooters can ride on a few CU Boulder properties, including East Campus and Williams Village.

To design these safety procedures, CU Boulder’s Director of Parking Services Tom McGann consulted other university officials in the Pac-12 to see how they implemented electric scooter restrictions on campus.

“We came up with our policy of making sure that [people] can only start and end in a scooter corral [on university property], identified by paint,” McGann said.

In an effort to stop intoxicated or riding-impaired residents from using a scooter, the scooters are also programmed to shut off from 10 p.m. to 7 a.m. every day, a recommendation put forward by CU Boulder officials.

According to McGann, these safety measures have been mostly successful, at least on university property. McGann said CU Boulder has only recorded one on-campus accident during the year-long pilot.

“I was expecting we’re going to see more injury,” he said. “We really didn’t.”

Given the positive results of the program so far, the university has already experimented with offering three more scooter “corral” points closer to the main campus. They hope this will reduce the number of scooters left in the underpasses on Baseline Road along the path from main campus to Williams Village.

The future of electric scooters in Boulder

To reach a final decision, Kemp and his team will analyze data collected over the past year, specifically focusing on the use of e-scooters in neighborhoods with college students, such as Williams Village and East Campus.

“College-age students are most likely to use the program and the service, and so what we’re seeing is that a great number of users are using [scooters] from start locations near Williams Village,” Kemp said.

“Overall, we’re basically looking for a holistic or comprehensive understanding of how and why people use these scooters to inform our evaluation of [the pilot program],” he continued. “Each scooter is embedded with a GPS chip, and Lime works with us to provide data we can analyze. We’ve got essentially a web-based platform where we can look up all this data in real time.”

They will also consider community members’ feedback, which was collected in September through an online survey on the city’s website. Kemp and his team intend to make their final decision at the end of October.

“It’s too soon to say what direction [the program] will go until we’ve received all the input from individuals and stakeholders and then compare that against the metrics,” Kemp said.

As the university waits for the final decision, officials are already planning to integrate scooters across the entire campus if the citywide expansion moves forward.

“We know that our students will use [the scooters] if the city expands because they’ve proven that,” McGann said. “The real question will be how do we manage them to safely get penetration to campus? If the student is using them as a way to get to class, we want to make sure it’s safe.”