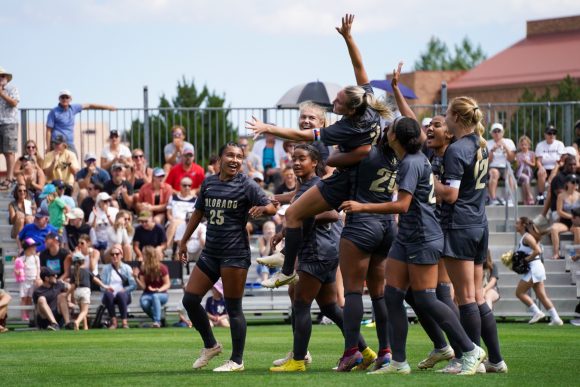 The University of Colorado Boulder’s women’s soccer team celebrates after 5th year forward Kayleigh Webb’s goal during the game against the University of Denver on Saturday, Sept. 17, 2022 at Prentup Field . (Rachel Glazer/CU Independent)

The University of Colorado women’s soccer team returned to Prentup Field this weekend to win a hard-fought match against Denver University after being on the road the week before.

After two large blowouts at home, the CU Buffs went on the road to face Michigan and Michigan State. CU drew against Michigan with a final score of 1-1. CU’s undefeated record ended against Michigan State later that week, losing 4-2. Heading into the match against Denver over the weekend, the Buffs had an overall record of 5-1-2. 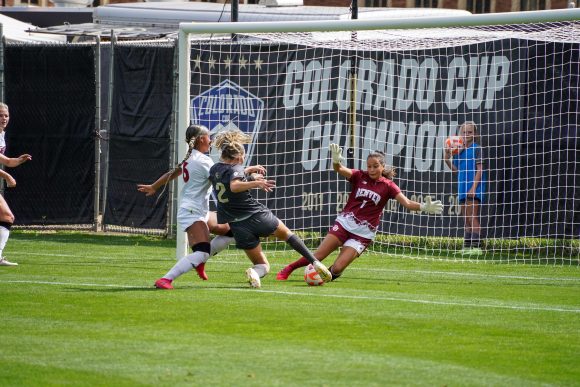 5th Year forward Kayleigh Webb attempts to score during the game against the University of Denver on Saturday, Sept. 17, 2022. (Rachel Glazer/CU Independent)

Saturday’s game brought in a large crowd and high energy as Colorado faced one of their biggest rivals. From the get-go, it was apparent that the Pioneers were going to match the high level of play that the Buffs experienced in their two previous matches against the Michigan schools.

Forwards Civana Kuhlmann and Emerson Layne kept the intensity up in the first half as head coach Danny Sanchez urged the girls to pressure the Pioneer defensive line. However, Denver returned this pressure in full force and kept the Buffs’ defense on their toes during continuous attempts to penetrate the back line. After lots of back-and-forth play, senior defender Alyssa Duke assisted forward Kayleigh Webb for a goal in the 33rd minute. By the end of the first half, the Pioneers had five shots on goal, and the Buffs had four. 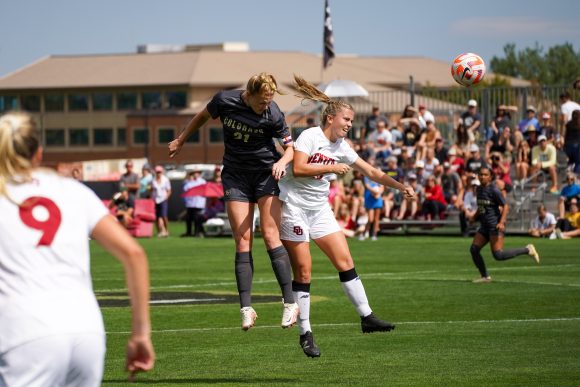 Fifth Year defender Hannah Sharts heads the ball during the game against the University of Denver on Saturday, Sept. 17, 2022 (Rachel Glazer/CU Independent)

Going into halftime, the Buffs held a slim lead of 1-0, and Sanchez had his eye on a shutout.

“We always want a shutout,” said Sanchez reflecting on the half, “The goal from Kayleigh [Webb] gave us a little bit of a spark, but we didn’t really build the momentum that we would have hoped for.”

The two rivals went into the second half with immediate intensity, resulting in multiple fouls, corner kicks and penalty kicks. CU had to make quick decisions, especially on defense, as the Pioneer forwards ramped up their speed. Duke kept great composure and made intelligent passes back to the goalie when things got hectic in their half of the field. 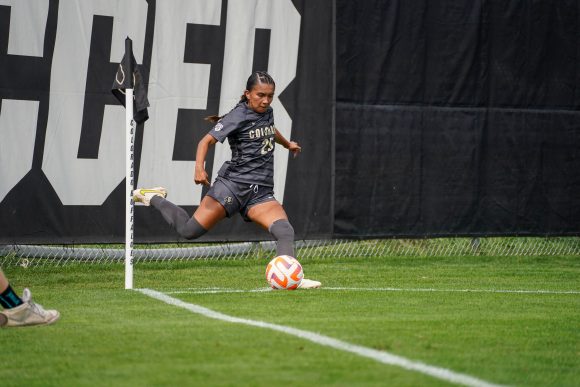 Senior midfielder Amaya Gonzalez takes a corner kick during the game against the University of Denver on Saturday, Sept. 17, 2022 at Prentup Field.(Rachel Glazer/CU Independent)

The CU coaches made frequent substitutions throughout the period to try new formations and rotate players with the most energy. Despite the intensity of Denver’s offense, the Buffs’ wingbacks were still able to move up and get involved in the attack. On offense, Webb made multiple key tackles that kept the ball in the Pioneers’ half and gave the outside forwards great looks on goal.

CU’s persistence paid off in the 56th minute when junior forward Shyra James intercepted a pass back to the Denver keeper and quickly got a shot off, making the score 2-0. Although their lead had increased, the pressure to preserve a shutout remained. The Pioneers did not make this an easy task either, getting seven shots off in the second half, a few of which barely missed the net. 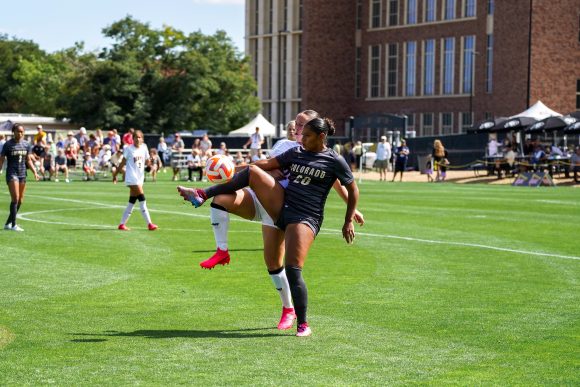 Junior forward Shyra James blocks the ball during the game against the University of Denver on Saturday, Sept. 17, 2022. (Rachel Glazer/CU Independent)

The Pioneers had most of the possession for the remainder of the game and attempted to capitalize on Colorado’s lack of connection in the midfield. Senior defender Hannah Sharts kept the back line patient during this increase in pressure, but the Pioneers responded with multiple strong crosses and shots from far outside the box. With just a minute left in the game, a Denver forward got past the CU defense and had a 1-on-1 with goalie Dani Hansen. Hansen made an incredible save to keep the score 2-0, ending the game with a sigh of relief from the Buffaloes. 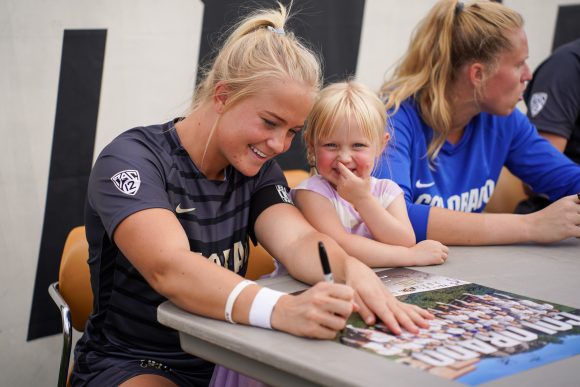 Senior forward Civana Kuhlmann signs a fans poster after the game against the University of Denver on Saturday, Sept. 17, 2022 (Rachel Glazer/CU Independent)

“Right there at the end we gave Denver a really good shot,” said Coach Sanchez after the match. “We got the win against our rivals which is very good but there’s still a lot of work to do… we need to be better.”

The Buffs have a week off of games until they return to Prentup Field on Sept. 23, where they will face Arizona State, another team expected to provide a strong challenge and an exciting match. 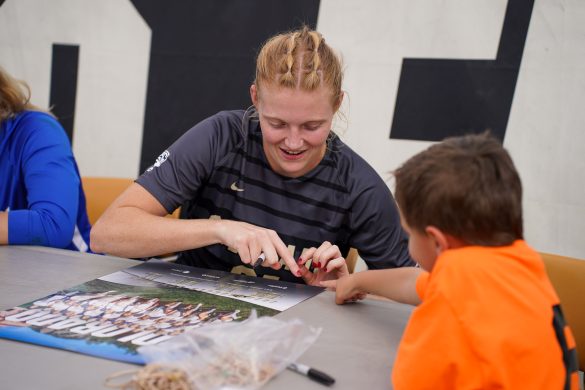 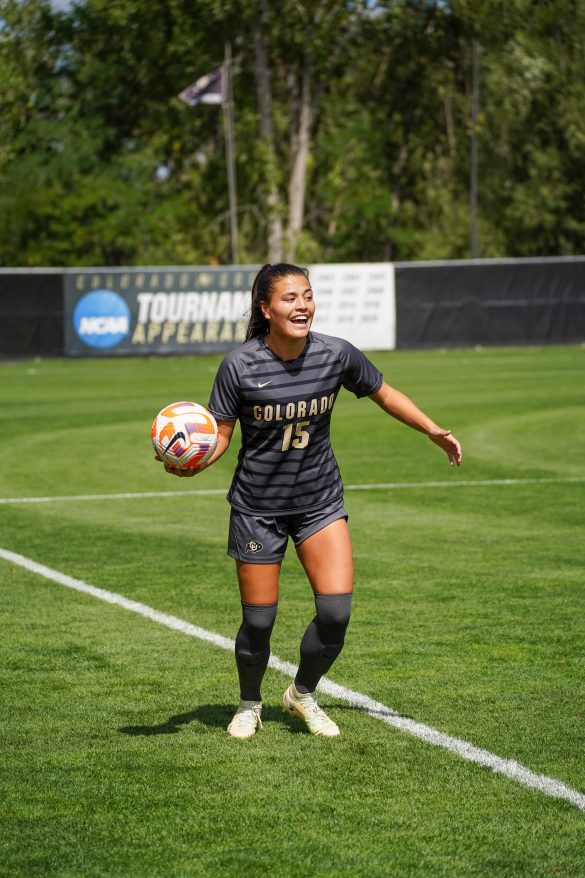 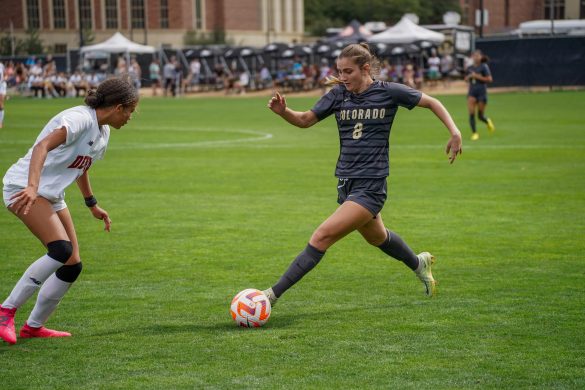 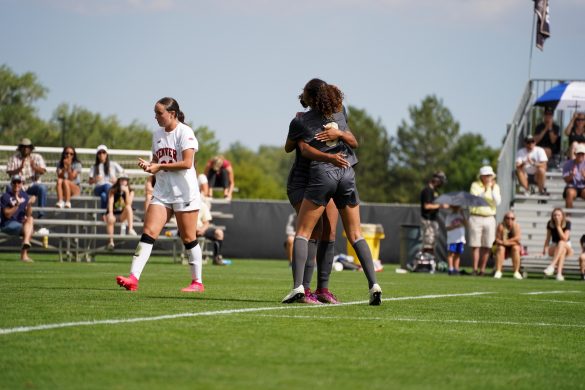 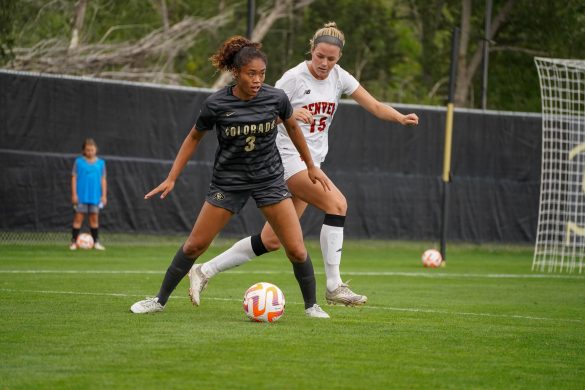 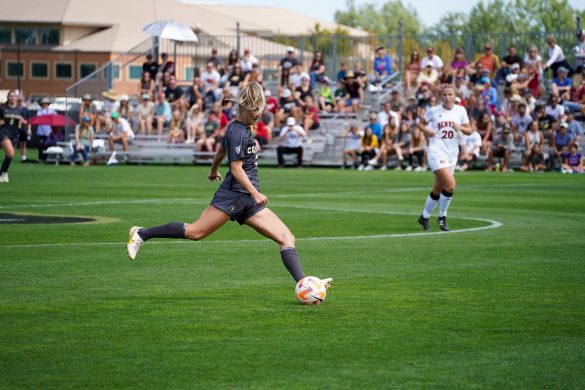