Struggles continue for the Buffs, losing 41-10 to Air Force Academy 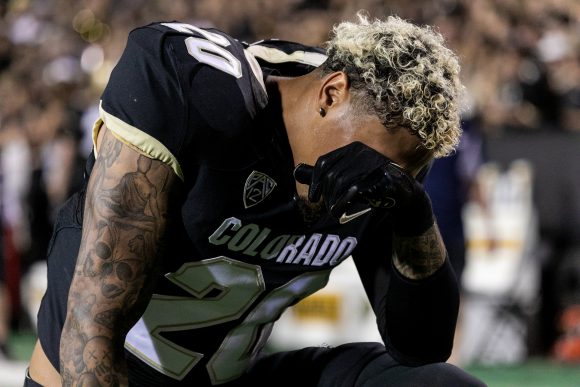 Inside linebacker Robert Barnes kneels on the field before the game against Texas Christian University at Folsom Field on Friday, Sept. 2, 2022. (Io Hartman/CU Independent)

After a tough opening loss against Texas Christian University last Friday, the University of Colorado Buffaloes had another disappointing outing against the Air Force Academy Falcons, losing 41-10, in Colorado Springs on Saturday, Sept. 10.

Going into the game as underdogs, the Buffs fell behind from the start. Foggy and rainy weather hindered their offense, and it proved challenging to spark any momentum.

After a week of secrecy about who would start at quarterback for the Buffs, sophomore J.T. Shrout was designated as the offensive leader for Saturday. He saw little success and was held to 5/21 with only 51 passing yards, as the Falcons defense stopped Shrout and the Buffs in their tracks.

When asked after the game if his quarterback’s struggles were due to the weather, head coach Karl Dorrell said, “It’s his first start. I think the weather played a factor for sure, but we’re going to continue to work on that position as well.”

The cold and wet Saturday afternoon game didn’t start well for CU, as the Buffs fumbled on the second play of the game. This set the tone for their offense, as they struggled to get any momentum going and finished with only 162 total yards. Junior tailback Deion Smith scored the lone touchdown for the Buffs on an impressive run down the sideline, finishing the game with 59 rushing yards.

On the other side of the ball, however, the Buffs’ defense showed potential. Led by senior inside linebacker Quinn Perry with double-digit tackles, the team recovered three fumbles throughout the game — even one at the goal line. However, they couldn’t stop the running game of the Falcons, giving up a total of 443 yards by the final whistle.

While only down 20-10 at halftime, CU still had an opportunity to win going into the third quarter. But, this soon proved unlikely, as Air Force kept running the ball and eventually scored 21 in the second half.

Similar to the game against TCU, CU keep the game within arm’s reach by halftime; however, the offense didn’t drive forward enough, and the defense didn’t stay solid for the second half.

“The bottom line is we were not playing well,” Head Coach Karl Dorrell said. “We’ve had good practices, but that hasn’t translated to what it should look like on Saturday. We’ll get better.”

Next, the 0-2 Buffaloes will travel to Minneapolis to take on the unbeaten University of Minnesota Golden Gophers. The game will take place at 1:30 p.m. MST on Saturday, Sept. 17.