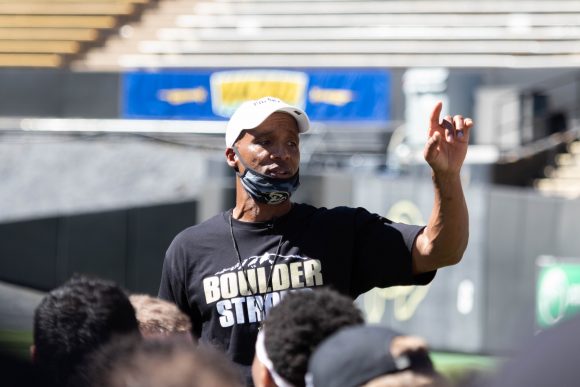 The Colorado Buffaloes held their 2022 Spring Showcase scrimmage at Folsom Field on Saturday, April 23. The scrimmage allowed for many of the non-starters to showcase their talent, while also allowing the starters to get additional repetitions in before the start of the season. Head coach Karl Dorrell explained how the multiple opportunities throughout the scrimmage allowed for the new and incoming players to get some experience.

This was no regular game, as the scoring breakdown in this scrimmage was unusual to the common football fan. As offensive scoring remained the same, the change in scoring allowed the defense to score points and keep up with the offense without having to change personnel, making it an offense versus defense game. The defense was awarded seven points for any turnover, four points any time they prevented a first down on third down, and three points for causing the kicker to miss a kick at any point in the game. The first team to score a total of 18 points, in however many possessions it would take, was declared the winner.

Freshman tailback Charlie Offerdahl, a Colorado native from Littleton, would have won the MVP award had there been any awards given out. The running back scored twice in the scrimmage, in addition to a 26-yard run which was the longest rushing play of the day, making the CU fans in attendance remember his name for the rest of the day.

Freshman wide receiver Jack Hestera forced the crowd to roar after he leaped into the air while spinning and being defended, to complete a 34-yard pass on a trick play thrown by sophomore wide receiver Montana Lemonious-Craig. Sophomore quarterback Brendon Lewis discussed how the connections between him and Lemonious-Craig continue to get stronger.

As the defense was winning 15-13 late in the scrimmage, the contest was assumed to be over when Lewis dove near the goal line which had seemed to be a touchdown. The referees were slow to rule anything on the field, until it was finally determined that Lewis was short of the goal line. The offensive team eventually won 19-15 after Lewis found sophomore wide receiver Michael Harrison waiting for a pass in the end zone two plays later.

Lewis ended the day throwing for 151 yards, eight first downs, and scored three of the four times his offense was inside the 20-yard line. Offerdahl ended the day with nine rushing attempts for 55 yards. Recent Baylor University graduate transfer R.J. Sneed led the wide receivers in catches with four, while Hestera’s spinning catch helped him achieve the most receiving yards for the day with 50.

Dorrell noted how the Buffs seemed ready to return to the field after watching Ralphie sprint across Folsom last Saturday.

“I think they’re legitimately excited about the season,” Dorrell said. “They really are. They’ll take their (summer) break, but they’re going to be looking forward to coming back this summer, getting back to work and really taking those final steps to get ready.”

The Buff’s will wait until mid-summer to return to Folsom Field and prepare for the first game of the season against Texas Christian University on Sept. 2.