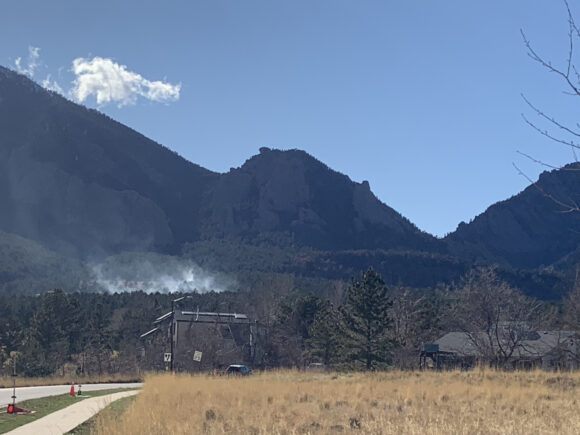 Boulder Firefighters responded to a fire that started near the Shanahan Ridge trailhead around 4 p.m. on Wednesday, April 6.

The North Shanahan Ridge Fire, as officials have named it, started less than two weeks after the NCAR fire, which burned 190 acres in total.

This fire only burned 0.6 acres, according to a tweet sent by Boulder Fire-Rescue. Personnel from Boulder County and Boulder Open Space and Mountain Parks assisted in responding to the fire.

Earlier in the day, the National Weather Service warned residents that high wind speeds and low humidity were apt conditions for a fire to break out. The Boulder County Sheriff’s office issued a red flag warning for the day.

By 4:55 p.m., officials announced that the fire had been put out.

“Firefighters are working to ensure the perimeter around the fire is safe and will be putting water on hot spots,” the announcement read.

Emergency responders closed trails in the area but did not order evacuations. No shelter losses or injuries have been reported and officials have not stated a cause for the fire.