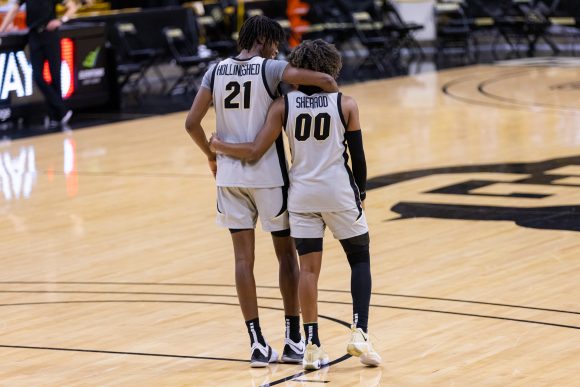 The Colorado Buffaloes (22-9) were defeated by the Creighton Blue Jays (21-9) in the first round of the NCAA tournament, bringing fifth-year forward Mya Hollingshed’s hall-of-fame-potential career to a close. After the Buff’s returned to the NCAA tournament for the first time since 2013, Head Coach J.R. Payne noted how this was not the outcome they wished for after the 84-74 loss.

“We’re not defined by one game,” Payne said. “Even though the outcome of this game was very disappointing and we wanted to win and believed we could win, we wanted a chance to play Sunday and continue to keep going. Our backs were up against the wall in must-win situations for the last six weeks and we continued to answer the bell every time. That’s very difficult to do when you think about everything that these young ladies are working through, being full-time students and crushing it in the classroom. It’s a lot and it’s very difficult. For them to have continued to answer the bell over and over and over again, was pretty incredible, and I was very proud of them for that.”

Although Colorado started the game on a 11-2 scoring run, the lead didn’t last for long as the first half ended with Creighton going on a 9-0 scoring run of their own. After entering second half with a Blue Jays lead of 36-31, the two teams continued to battle between score changes as Colorado was able to cut down their lead at multiple moments throughout the game, but were never able to take the lead and hold it.

“I just came out and played my game,” Sherrod said. “Mya (Hollingshed) and the coaches talked to me before the game and just told me to enjoy the moment, so that’s what I did.”

Colorado recorded more assists (16-15), steals (8-3) and blocks (4-2) than Creighton while also committing less turnovers (8-15), yet the Buffaloes were unable to pull out a win possibly due to the 20 fouls they committed and the 21.1 shooting percentage they totaled from three-point range. In comparison, the Blue Jays shot 42.1 percent from behind the three-point line and committed only 11 fouls. Creighton also registered 18 free throws made, while CU could only achieve 10.

“Our response was really good,” Payne said. “To regroup at halftime and come out aggressively to have a good third quarter like we did, talk about answering the bell. I thought our team continued to do that.”

Replacing Mya Hollingshed will be impossible, as she has made a name for herself in the Colorado record books permanently. Hollingshed notched 1,681 points scored in her career which is sixth on the all-time scoring list for CU, as she finishes 94 points shy of Shelley Sheetz (1,775 points, 1991-1995). She ends her collegiate career with 25 double-doubles, which is also sixth all-time on the all-time double-doubles list for CU. She passes Sandy Bean (23 double-doubles, 1978-82) in this category, as she also tied her career high with eight double-doubles in a single season this year. In Colorado’s loss to Stanford in the Pac-12 Tournament on March 4, Hollingshed became just the sixth player in CU history to reach 900 rebounds, as she finishes her time in Boulder with 911 rebounds after the matchup against Creighton.

“This is always why I came back,” Hollingshed said. “This experience, this moment with my teammates and with my sisters Lesila (Finau), Peanut (Tuitele), and Aubrey (Knight) who hasn’t been able to play. But for them to experience that so we can actually go to ‘the dance’ and everything we’ve talked about; this is what basketball is all about.”

Seniors Mya Hollingshed, Lesila Finau, Sirena “Peanut” Tuitele, and Aubrey Knight have suited up for CU for the final time in their career, creating a new team for next season’s 2022-2023 squad. J.R. Payne will head into offseason practices looking for next Buffs to fill the roles of the parting seniors.