Buffs fall short of win in first-round of NIT tournament 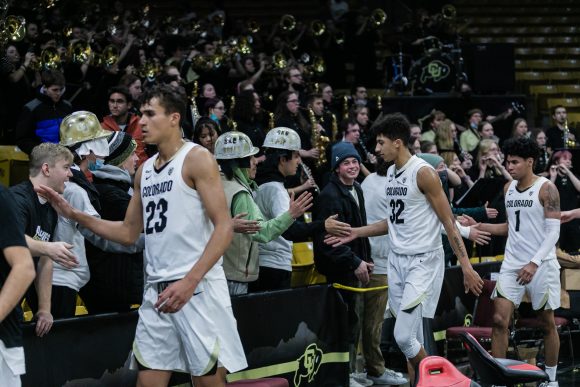 The No. 4 seed Colorado Buffaloes (21-12) were stunned at home by the No. 5 seed St. Bonaventure Bonnies (21-9), losing 76-68 in the first round of the NIT tournament. For the Buffs, this was the 12th trip to the NIT in school history after falling short of qualifying for the NCAA tournament.

While Colorado entered the tournament fresh after a semifinals loss in the Pac-12 Tournament to the Arizona Wildcats, the Bonnies had just endured a heartbreaking loss to Saint Louis in the Atlantic 10 tournament quarterfinals. Regardless, St. Bonaventure came ready to play.

After just over two minutes played in the first half, the Bonnies led the game 10-2. Sophomore guard Keeshawn Barthelemy, who had been a regular starter for Buff’s head coach Tad Boyle prior to the Pac-12 tournament, came off the bench and provided a spark that Colorado desperately needed. Barthelemy went straight to work, hitting a three-point shot on his first attempt and making a tough lay-up on the following possession. The Buffs created some offense and led the game by five points with just under two minutes left in the first half.

Bonnies’ guard Kyle Lofton played well in the first half, going 3-6 from the field and 2-4 from three-point range. Lofton and guard Jalen Adaway led the way for St. Bonaventure, as they each scored eight points.

In the second half, the Buffs made both of their first two shots to extended their lead to seven, at a score of 43-36. Shortly after, freshman guard Julian Hammond III pushed the lead to ten with just under 18 minutes left in the game. Unfortunately for Colorado, the Bonnies couldn’t be silenced as they continued to fight back.

Jalen Adaway hit a three to bring St. Bonaventure within two points of the Buffs. After that point, the two teams fought back and forth as each side took multiple small leads, but neither could consistently stay on top.

Colorado tied the game at 68 as sophomore forward Tristan da Silva scored a pair of free throws with less than three minutes left in the game. After that, the Buffaloes were unable to score any points in the final minutes while the Bonnies scored eight straight. The game ended with a final score of 76-68.

Colorado finished the game shooting 25-58 from the field and 7-25 from three. The Bonnies shot 29-55 and 10-20 from three. After the loss, Boyle expressed his disappointment and frustration on how the final game of the Buffs 2021-2022 campaign ended.