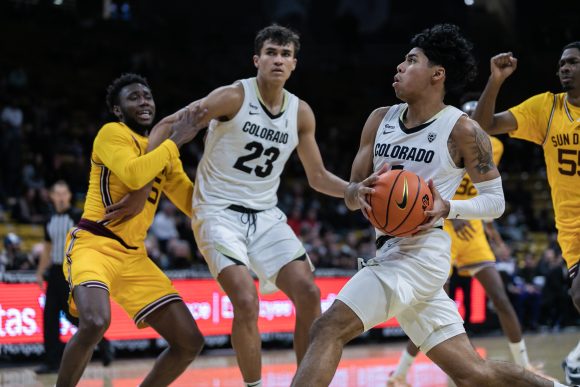 Freshman guard Julian Hammond drives towards the basket during the game against Arizona State at the CU Events Center on Feb. 24, 2022. (Io Hartman/CU Independent)

Colorado entered their final home stretch of the season on Thursday night against conference foe, the Arizona State Sun Devils. Winning their previous five games, CU looked to extend their win streak against a struggling Sun Devils team that stood at just 10-16 entering the night, including a 6-10 record through Pac-12 play.

Despite the momentum and an energized home crowd, the Buffaloes struggled on both ends of the court, ultimately falling to Arizona State 82-65, one of the larger losses for the program on the season.

The 17-point loss was just the surface of the Buffs’ problems against Arizona State, as they were outplayed in several major statistical categories such as rebounds, turnovers, and points in the paint amongst other things. In addition to the lack of production on the court, Boyle also discussed the overall lacking performance and focus.

“There’s no way to sugarcoat it,” said head coach Tad Boyle. “We just got kicked tonight.”

On the other end of things, Arizona State showed noticeable improvement from their January matchup with Colorado in Tempe, a game that CU won 75-57 while on the road. Regardless, the Buffs hurt themselves at home as they shot just 26% from behind the three-point line, and were outscored off the bench by a staggering 20 points.

As the deficit steadily increased throughout the game, the energy quickly left the CU Events Center, deflating the Colorado team even further. No matter the case, the big problems for CU came defensively as they ultimately allowed 82 points to Arizona State.

“We didn’t come out with energy or defensive pride,” said sophomore guard Nique Clifford. “We just weren’t ready to go on the defensive end.”

Despite the teams’ “no quit” mentality that has been on display all season, slow starts in both halves put Colorado in a tough position early, a position they weren’t able to recover from throughout. Their poor defense specifically made it difficult to make a comeback.

After defeating the No. 2 Arizona Wildcats in one of the biggest upsets in program history, the Buffs head to Utah to take on the Utes in their final regular-season game before heading to the Pac-12 tournament that begins on March 9.