At The Chancellor’s Summit, CU professors talk climate and justice 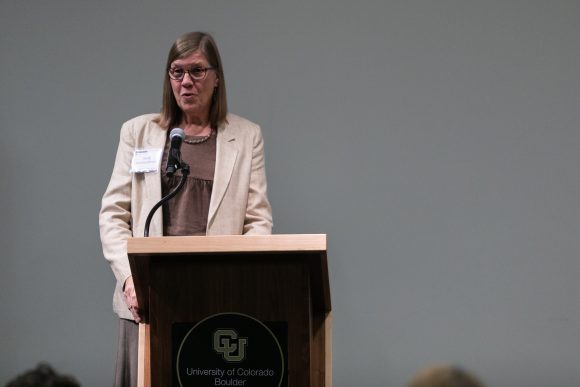 On Feb. 23, the University of Colorado Boulder held The Chancellor’s Annual Summit in Denver. The theme of this year’s summit, an event hosted for donors, alumni and students, was climate change and justice.

In addition to attending the event, the CU Independent spoke with presenters to better understand the work that they do.

CU Boulder’s Chief Sustainability Officer Heidi VanGenderen helped lead the summit, which featured a wide variety of speakers who each addressed a unique area of the climate change problem.

Prior to working at CU, VanGenderen held positions as the director of public engagement for the U.S. Department of Energy, Colorado’s first gubernatorial climate advisor for Governor Bill Ritter and the deputy director for the Presidential Climate Action Project. Throughout her career, VanGenderen maintained the same passion for sustainability.

“I’m not sure really where my passion for the work that I do stemmed from, but I’ve held it for a long time,” VanGenderen said after the summit. “I had the privilege of growing up in Colorado, so I was able to be out in the remarkable ecosystem that supports all life and was drawn to that for recreation, but also as a student, of being in awe of the natural resource ecosystem that we have.”

VanGenderen introduced Associate Professor Clint Carroll, who teaches ethnic and indigenous studies, at the summit. Carroll’s research has a focus on Indigenous-focused sustainability and land conservation. He is a citizen of the Cherokee Nation in Oklahoma, and works closely with the community. 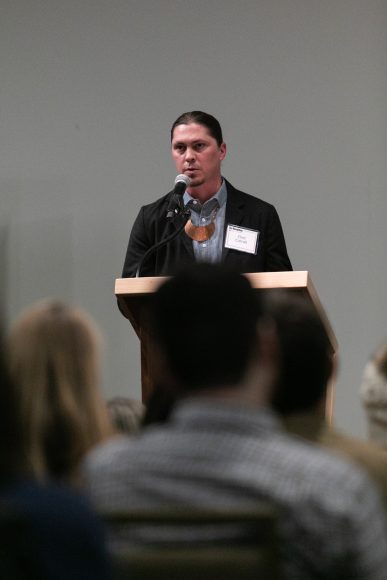 Carroll has a degree in environmental science, policy and management. He uses that expertise, as well as certain Cherokee Nation scientific approaches in his work. Carroll said he valued the benefit of communication and relationships as he continued into teaching at the university.

“Having that opportunity to have meaningful and critical conversations with my colleagues that reach across all groups and really understand how these types of issues, whether it be climate justice, or social justice, or thinking about the history of the United States in a critical way opens up futures that are, to me, greatly needed in terms of where we’ve been as a country and then where we’re headed,” he said.

Carroll said that he wants those who work on issues of climate advocacy to recognize that there should be a collective responsibility to help marginalized populations that have been hurt the worst by climate change and environmental disasters.

Assistant Professor Matthew Burgess also spoke at the event. Burgess has a degree in ecology and focuses his climate research on macroeconomics and political divisions. Burgess teaches in the environmental studies program and is a Benson Center fellow. 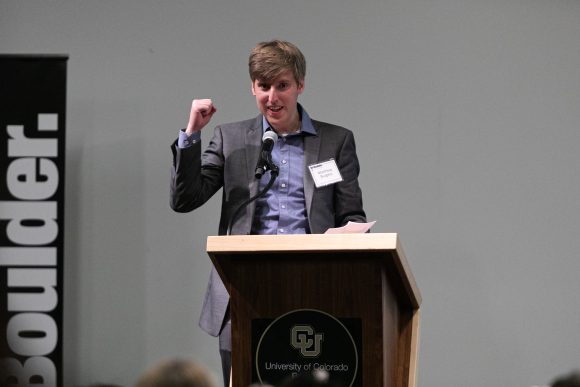 “I went into academia because I wanted to work on and think about the biggest, most important questions and problems of the day and climate is clearly one of them.”

Burgess also sees relationships and community as vital components in making a change in the climate world. A big obstacle to that change, he said, is the political polarization around environmental work.

“If we really need a society-wide transition sustained over decades, that’s just not going to happen in this country without both parties being on board,” Burgess said. “So we, in general, if we’re going to get big, ambitious projects done as a society, that’s not going to happen unless we have some sense of shared purpose and unity.”

These three different specialists agree that creating a collective community around climate and climate justice issues is vital to finding solutions. Those solutions, VanGenderen said, can be hard to come by.

Despite this, VanGenderen said that she was optimistic about the amount of work ongoing to make those changes happen.

“A lot of great work is underway at this University in terms of how a renewable energy economy is deployed at scale,” VanGenderen said. “And that’s going to take place literally building by building, material by material, transport mode by transport mode, neighborhood by neighborhood, community by community.”