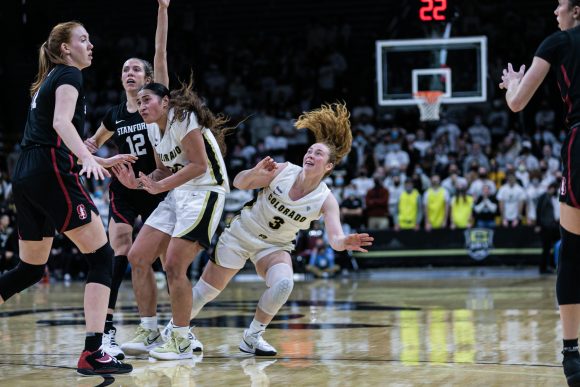 Frida Forman and Peanut Tuitele react after passing the ball to other teammates during the game against Stanford on Friday, Jan. 14th, 2022. (Io Hartman/CU Independent)

With eight minutes left to play, the University of Colorado led by 14 and looked well on their way to a big win against 25th ranked University of Oregon. The Ducks didn’t roll over easy as they battled back to force overtime with a pair of free throws by Endyia Rogers. It ended up taking two overtimes but the Buffs prevailed with an 86-83 win over Oregon at the CU Event Center.

“These games provide you an opportunity to really see who are we,” said head coach JR Payne. “I know that we have a bunch of great young women on our team. I know we play hard. I know we are tough. We are fearless. But who are we when our back is really against the wall and it is a must-win and things aren’t going well? Are we going to splinter? Are we going to separate? What I saw is all 15 players, all the coaches, all the staff poured into each other and brought each other together. Which is everything that you want to see.”

The first quarter of the game was back and forth. However, the Buffs started to pull away from the Ducks in the second quarter on the back of some excellent shooting from senior guard Lesila Finau who scored a career-high fifteen points in the game. Nine of those points came from three first-half three-pointers.

“Once I saw that first shot, first three, and second three go in I knew that I was good from there,” said Finau. “So, I just kept shooting.”

The Buffs’ lead didn’t last too long as the Ducks dominated the first five minutes of the third quarter to briefly snatch the lead back from Colorado. After a timeout, the Buffs regrouped and closed out the half with a dominant 12-2 run led by strong play from junior guard Jaylyn Sherod and senior forward Mya Hollingshed.

In the final quarter, Colorado’s lead swelled to 14 with 8 minutes to go, but once again Oregon steadily started chipping away. With a minute to go the Buffs led by just five points.

It proved to be hectic final sixty seconds of regulation as CU struggled mightily with turnovers and fouls. With less than a minute left Colorado lost one of its best players as Hollingshed fouled out after picking up 4 fouls in the span of the game’s final four minutes. Ultimately, the Ducks made five threes in the last minute in order to force overtime.

The first overtime was the Quay Miller show as she scored seven of the Buff’s eight points to ensure that they played another overtime. In the second overtime, Colorado finally prevailed. They grabbed the lead with a layup from Peanut Tuitele and never surrendered it as they closed out an 86-83 win.

With the calendar preparing to flip over to March next week Colorado is beginning to hit their stride. With the win over the Ducks, Colorado has now won five of their last six Pac-12 conference games, with their lone loss coming on the road against number two ranked Stanford. It has been a much-needed bounce-back stretch for the Buffs who after a perfect 13-0 start to the season dropped six of their next seven games.

Colorado will be back in action at the CU Event Center for their final regular-season game against Oregon State this Saturday at 12 PM MT.