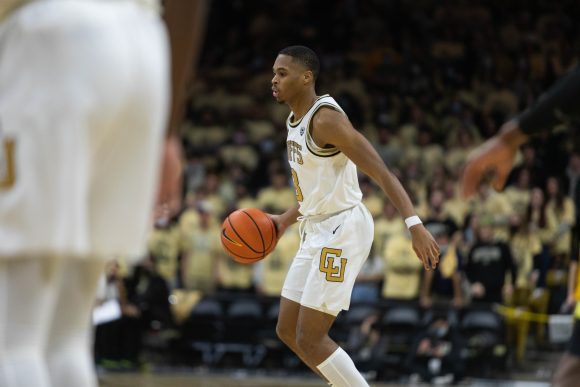 Sophomore guard Keeshawn Barthelemy brings the ball down the court to set up a play during the second half at the CU Events Center. Feb. 3, 2022. (Kara Wagenknecht/CU Independent)

The CU men’s basketball team fell to Oregon on Thursday night, finally giving the Ducks a win in Boulder for the first time.

While the first half of the game seemed to be toe to toe for both teams, the Ducks gave the Buffs a run for their money in the second half and eventually gained a big enough lead to result in a 66-51 win for Oregon.

Sophomore guard Keyshawn Barthelemy led the Buffs, who scored 16 points in the first half.

“My energy level was good and it should have been the same in the second half,” Barthelemy said.

However, the offense was a struggle for the Buffs all night. The Buffs had 20 turnovers, with 13 occurring in the second half, and shot 6-for-22 in the second half. Part of the problem for Colorado had to do with a slight change in coaches Thursday night as head coach Tad Boyle had tested positive for COVID-19 a few days before. CU was led by associate head coach Mike Rohn who served as acting head coach against the Ducks.

“We have to address turnovers, we have to practice why we’re turning it over and continue to get better at that,” said Rohn. “You can’t turn the ball over against a good team like Oregon. That was basically the whole game.” 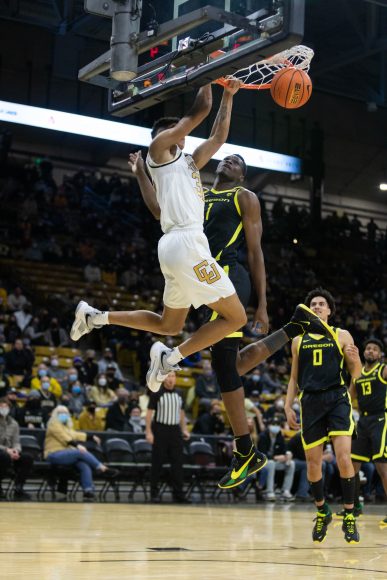 Sophomore guard Nique Clifford dunks the ball during the first half at the CU Events Center. Feb. 3, 2022. (Kara Wagenknecht/CU Independent)

13 of the 20 turnovers occurred in the second half of the game.

“We turned the ball over and kind of lost hope,” said senior forward Evan Battey.

“Honestly, I felt at the end we kind of quit a little bit,” said Barthelemy.

This loss now makes the Buffs 13-9 overall and 5-7 in Pac-12 play. While Boyle’s return can potentially help, the Buffs’ morale will decide if another team from Oregon wins in Boulder this weekend. Battey said, “It’s just more so on us throwing away the ball. He can’t save us from turning the ball over 20 times.”

The Buffs hope to end their third consecutive loss at home streak as they host the Oregon State Beavers (3-16) Saturday afternoon, with Coach Tad Boyle expected to return.