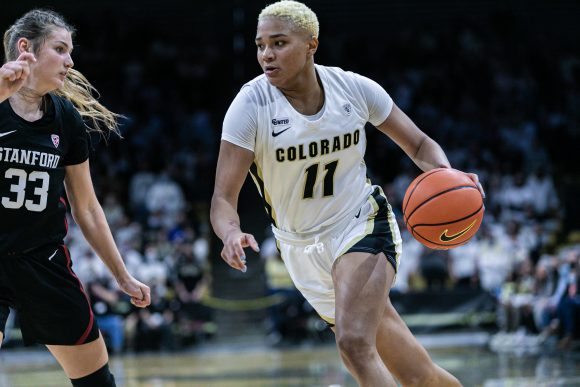 For the first two months of the season, the University of Colorado women’s basketball team rolled over opponents with relative ease.  After thirteen games the Buffs were still undefeated with an average margin of victory over 19 points a game. On Jan. 14, that early-season dominance came to a crashing halt as a poor second-half performance handed Colorado their first loss at home against Stanford.

The following two weeks since that loss have not been kind for the Buffs. In that span, CU has played in three road games and lost all three. On Friday night Colorado (14-4) finally returned to form with a much-needed 66-62 win in overtime against the University of Utah (10-7).

Led by the early shooting of senior forward Mya Hollingshed the Buffs leaped out to a 13-4 lead midway through the first half. It was the start of a quality night for Hollingshed who finished the game with an impressive 16 point and 11 rebounds double-double.

Colorado’s early lead though proved to be short-lived as the CU offense cooled down and the Utes took advantage with a 15-2 scoring run to grab a 33-28 lead heading into the half.

In the third quarter, the Buffs’ offensive struggles persisted, but their strong defensive effort ensured that they remained within striking distance of the Utes. Entering the 4th quarter Colorado remained 5 points behind Utah. That is when senior forward Peanut Tuitele took over the game. The Buffs rode a seven-point run by Tuitele to storm back to a 52-48 lead. Colorado battled back and forth for the remainder of the quarter and lead 58-55 with less than 10 seconds to go.

Unfortunately, the Buffs failed to get a crucial defensive rebound and allowed Dasia Young to drain a 3 pointer to force an additional five minutes of play. Colorado managed to brush off the buzzer-beater, as sophomore guard Tameiya Sadler drained multiple clutch baskets to secure a narrow four-point victory.

Utah won’t have to wait long for a rematch against CU as the Utes will now travel to Boulder to square off this Sunday at 12 p.m. MT.